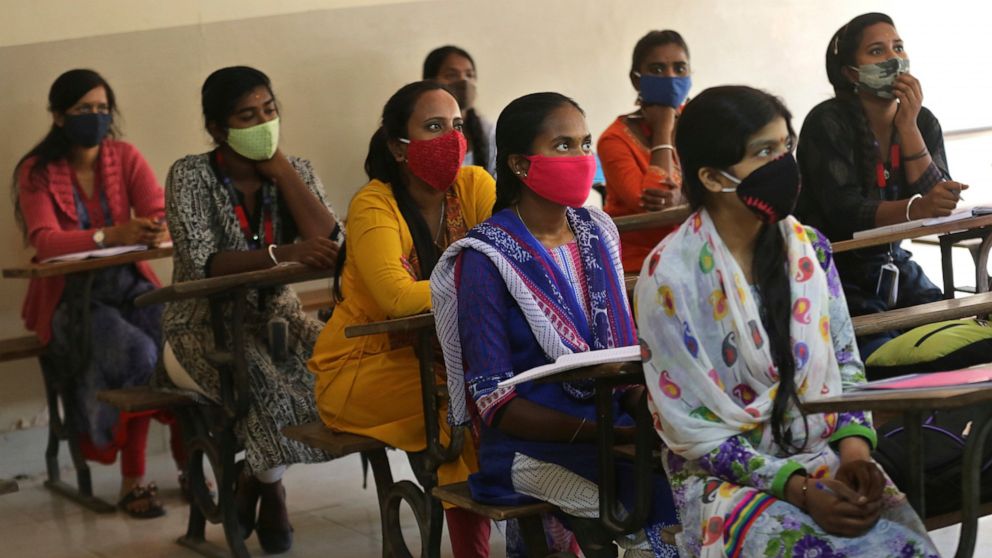 India has registered 44,376 new confirmed coronavirus cases in the past 24 hours

NEW DELHI — India has registered 44,376 new confirmed coronavirus cases in the past 24 hours.

The latest increase has taken the total number of cases to 9.22 million, the Health Ministry said Wednesday. Deaths rose by 481, driving the total fatalities to 134,699.

India’s confirmed daily toll has remained below 50,000 for a few weeks, after peaking in September. But several cities have witnessed a surge in cases, prompting some state governments to clamp additional restrictions to contain the spread of the virus.

In Mumbai in southern India, travelers from New Delhi, Rajasthan and Gujarat will have to undergo mandatory coronavirus tests before entering the city. The three northern states are witnessing the latest surge in infections.

The situation remains grim in New Delhi, which is recording the highest number of cases in the country. The capital is reporting nearly 100 deaths on average every day for the last two weeks.

In other developments in Asia and the Pacific:

— South Korea says 60 new army recruits at a boot camp have tested positive for the coronavirus in the military’s largest outbreak. The Defense Ministry said Wednesday they were undergoing basic training at an army unit in Yeoncheon, a town near the tense border with North Korea, at the start of their 18 months of mandatory military service. It said one of the recruits was found to have contracted the virus on Wednesday morning and 59 others tested positive later in the day. It said more tests are under way to determine whether 860 other recruits and troops at the Yeoncheon unit were also infected. Earlier Wednesday, the ministry said 267 people in the military have been confirmed to have contracted the virus since the country reported its first case in January. All able-bodied men in South Korea must serve in the military under a conscription system to cope with potential aggression from North Korea. South Korea on Tuesday tightened social distancing rules in the greater Seoul area and other parts of the country to try to contain a recent spike in infections. Health authorities on Tuesday recorded 382 new cases, taking the country’s total to 31,735, including 513 deaths.

— Tokyo’s governor on Wednesday asked bars and other places where alcohol is served to close earlier for three weeks to help prevent a resurgence of coronavirus infections from turning explosive. Gov. Yuriko Koike said bars, karaoke outlets and restaurants serving alcohol in the city are being requested to close by 10 p.m. beginning Saturday until Dec. 17. “In order to prevent a further spread of infections and protect the lives of the residents of Tokyo, we are taking brief and intensive measures,” Koike said, asking for the business owners’ cooperation. Tokyo will provide 400,000 yen ($3,800) in compensation to those who fully cooperate with the effort, she said. The measures are Tokyo’s first since it made a similar request at the end of August to eateries, karaoke bars and other drinking places in central and downtown Tokyo during an earlier wave of infections.

— China says a fast-track arrangement for business-related travel with Japan will be launched on Nov. 30. Chinese foreign ministry spokesperson Zhao Lijian said Wednesday that the two governments agreed to facilitate business and other necessary exchanges. Details of the plan have not been publicly released. The two governments have been discussing a program that would allow travelers to engage in limited business activities during the 14-day quarantine period after arrival. Zhao said the program would support the resumption of work and production. Both countries are eager to rejuvenate their economic growth after virus-related slowdowns. China and Japan have also said that a fast-track system for students, interns and workers with long-term residence permits will start by the end of the month.

California parents sue after getting another couple’s embryo

Kohli stands between Australia and victoryMatthew Wade scoring at will