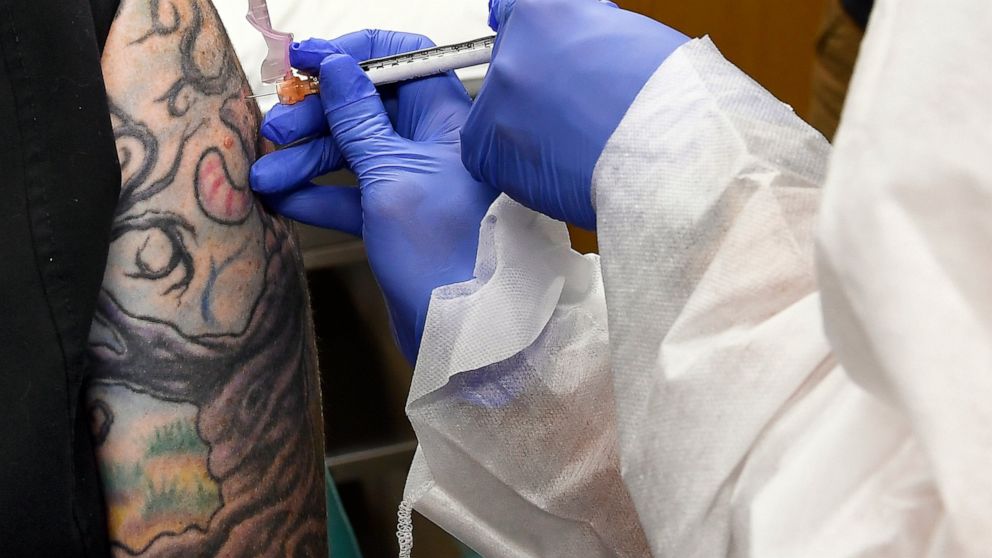 ROME — Italy’s health minister told lawmakers on Wednesday that Italy will distribute 202.6 million doses of COVID-19 vaccines during 2021 in “an unprecedented effort that will require a huge collective commitment.’’

Robert Speranza said the vaccines will not be mandatory, but that the doses allotted Italy through an EU collective purchasing agreement would be “enough to potentially vaccinate the entire population.”

Speranza emphasized that the distribution of the vaccines would depend on regulatory approval which was still pending from the European Medicines Agency.

The first vaccines are expected to arrive in January with Pfizer’s vaccine expected to get first EMA approval by Dec. 29 and Moderna by Jan. 12. Priority will be given first to Italy’s front-line health care workers, then residents of nursing homes, then to elderly over 80 before moving to other groups like people with medical risks, law enforcement, teachers and prison workers.

Speranza said the vaccines provide “a message of hope” in the pandemic, which has killed more than 55,000 Italians, but that “prudence and caution are still needed.”

— British lawmakers approve new coronavirus restrictions in England that will take effect within hours. But Prime Minister Boris Johnson faced substantial opposition from within his Conservative Party over the measures.

— Canadian Prime Minister Justin Trudeau says the ban on nonessential travel with the United States will not be lifted until COVID-19 is significantly more under control around the world.

LONDON — Drugmakers Pfizer and BioNTech said Wednesday they’ve won permission for emergency use of their COVID-19 vaccine in Britain, the world’s first coronavirus shot that’s backed by rigorous science — and a major step toward eventually ending the pandemic.

The move allows Britain to become one of the first countries to begin vaccinating its population as it tries to curb Europe’s deadliest outbreak.

“The vaccine will be made available across the U.K. from next week,″ the Department of Health and Social Care said in a statement. The National Health Service “has decades of experience in delivering large scale vaccination programs and will begin putting their extensive preparations into action to provide care and support to all those eligible for vaccination.″

Other countries aren’t far behind: Regulators in the United States and the European Union also are vetting the Pfizer shot along with a similar vaccine made by competitor Moderna Inc.

British regulators also are considering another shot made by AstraZeneca and Oxford University.

PARIS — French Prime Minister Jean Castex has announced that “random border checks” will be put in place over the holiday season targeting French skiers trying to get to foreign resorts, particularly in Switzerland.

“The goal is to avoid French citizens getting contaminated. That will be done by putting in random border checks,” Castex said on BFM TV Wednesday.

He said the controls will include virus tests and a seven-day quarantine will be imposed on returning French skiers.

On Tuesday, President Emmanuel Macron had indicated that the government was considering taking “restrictive and dissuasive measures” to prevent the French from going abroad to ski, especially in Switzerland, at Christmas.

France will apply restrictions to prevent vacationers from going to ski resorts abroad and French slopes will remain closed during the Christmas period amid the coronavirus pandemic Macron said.

France has reported over 52,800 dead in the pandemic, the third-worst death toll in Europe after Britain and Italy.

PARIS — French Prime Minister Jean Castex said his country is putting in place a “progressive” virus vaccination plan, with more than enough doses to cover the entire population of 67 million.

Speaking on BFM TV Wednesday, he said that the government had “pre-ordered enough to vaccinate 100 million people, via the European system.”

It was the European Commission that negotiated with pharmaceutical companies on behalf of European Union member states. Authorizations to use the vaccines will come “rather toward the end of December,” he said.

He will outline the specifics on Thursday alongside Health Minister Olivier Veran.

Freitas, 63, has been the government’s chief official for the virus pandemic.

Portugal’s virus infection numbers have eased in recent days. The country has registered some 300,000 cases and 2,300 deaths.

TOKYO — Japan’s parliament on Wednesday approved revised vaccination legislation to accommodate smooth distribution and administration of coronavirus vaccines for all citizens to fight the pandemic.

The government aims to secure vaccines enough for all 126 million Japanese by the first half of next year.

Under the law, the people are required to make efforts to receive the coronavirus vaccine as part of their cooperation in fighting the pandemic. Local municipalities will carry out inoculations for free, with priority given to the elderly and those with underlying health issues.

The government hopes to start vaccination during the first half of next year, ahead of the Summer Olympics that has been postponed until July due to the pandemic.

The enactment comes as Japan struggles with a resurgence of the infections, with rapid increase of serious cases burdening medical systems. Tokyo, Osaka and several other cities have seen rapid spikes of cases.

Nationwide, Japan has had 2,172 deaths as of Wednesday.

The government, however, has ruled out re-imposing a nationwide lockdown to contain the spread of the virus, which has killed 8,166 people and infected 403,311 in Pakistan.

Pakistan flattened the curve in August but currently it is facing a lethal new surge of infections, mainly due to those violating social distancing rules.

SEOUL, South Korea — South Korean officials are urging people to remain at home if possible and cancel gatherings large and small as around half a million students prepared for a crucial national college exam.

Vice Education Minister Park Baeg-beom says the 490,000 applicants so far include 35 virus carriers who will take exams Thursday at hospitals or treatment shelters. Education authorities have also prepared separate venues for some 400 applicants currently under self-quarantine.

Applicants will be required to wear masks and maintain distance from each other. They will be screened for fever and take exams separately if they have symptoms.

Park Yu-mi, an anti-virus official in Seoul, pleaded with people to cancel all gatherings of more than 10, and for companies to half at least one-third of their employees work from home to ensure a safe environment for Thursday’s examination.

The country on Wednesday reported 511 new infections, continuing a weekslong resurgence centered around the greater capital area that brought the national caseload to 35,163, including 526 deaths.

NEW DELHI — India has maintained a declining trend in coronavirus infections with 36,604 new cases reported in the past 24 hours.

The cases declined by 32% in November as compared to October, according to the Health Ministry. For more than three weeks, India’s single-day cases have remained below 50,000.

The capital of New Delhi has also seen a dip in daily infections. It reported 4,006 new cases in the past 24 hours.

DENVER — The ACLU of Colorado and the Weld County Sheriff’s office have reached an agreement to implement measures at the county’s jail to better protect inmates from the coronavirus pandemic.

Weld County Sheriff Steve Reams and the ACLU asked a federal judge Tuesday to enter a consent decree between the two sides to carry out the changes and provide federal oversight.

The ACLU had filed a lawsuit in April alleging that the sheriff’s office had failed to meet public health orders related to the pandemic and did not sufficiently protect inmates, jail staff and the public.

In a partnership with the Maryland Hospital Association, the governor announced the launch of an initiative called MarylandMedNow to recruit people with clinical backgrounds to work at state hospitals, nursing homes, testing sites and vaccination clinics.

The state has asked colleges and universities to develop emergency policies and procedures to award academic credit to students who are willing to get hands-on work experience during the pandemic.

The governor also announced steps to increase hospital beds. Hospitals across the state will be required to submit a patient surge plan, including strategies to expand bed and staffing capacity adjustments. They will be due at the health department Dec. 8.

All three local officials were on the hot seat Tuesday after various reports that they violated rules aimed at controlling the spread of the coronavirus — or at a minimum, violating the spirit of the rules as they repeatedly urged others to stay home.

Breed joined seven others at the three Michelin-starred French Laundry on Nov. 7 to celebrate the 60th birthday of socialite Gorretti Lo Lui, the mayor’s spokesman confirmed to the San Francisco Chronicle. She dined in the same kind of partially enclosed indoor/outdoor room Gov. Gavin Newsom celebrated in a day earlier.

Newsom, who has appealed to Californians to “do your part” and stay home, apologized when the 12-person dinner was reported, then again when photos emerged showing him, his wife and others sitting close together at the same table without masks.

Breed’s spokesman, Jeff Cretan, called the mayor’s French Laundry dinner a “small family birthday dinner.” He did not immediately respond to a telephone message Tuesday inquiring whether the dinner involved more than three different households, which are prohibited under the state’s rules.

Dr. Anthony Fauci, director of the National Institute of Allergy and Infectious Diseases and a member of the White House’s coronavirus task force, warned during a virtual news conference that Colorado is not alone in seeing a spike in cases and pleaded with people not to travel or gather in large groups.

“If you look across the United States, we are really in a public health crisis right now because we are having a surge the likes of which is worse than the surges that we all saw in the late winter, early spring,” Fauci said.

He added that “we are likely going to see a surge upon a surge” of cases, based on the number of people who traveled and gathered for Thanksgiving and on those who are expected to shop and attend holiday parties before celebrating Christmas and New Year’s in large groups.

Colorado has been hit with a substantial spike in COVID-19 cases, with one in 41 residents believed to be contagious.

UNITED NATIONS — The U.N. General Assembly is trying to address the problem of 400,000 seafarers stranded at sea as a result of COVID-19 by adopting a resolution urging all nations to designate those working on ships as “key workers.”

The resolution adopted by consensus Tuesday by the 193-member world body stresses the very difficult conditions seafarers face at sea which have been exacerbated by the response to the pandemic that has impeded crew changes and repatriation of sailors to their home countries.

Indonesia’s U.N. Ambassador DianTriansyah Djani, who sponsored the resolution, said the work of two million seafarers “who have shown their dedication and professionalism during this crisis, ensuring that world trade and logistics continue to move properly” largely goes unnoticed.

The resolution acknowledged that “shipping has continued to transport more than 80 percent of world trade essential to the normal functioning of society, including vital medical supplies, food and other basic goods that are critical for the COVID-19 response and recover

Why now is the perfect time for a digital detox

Terrifying GoPro Footage of Snowboarder Getting Caught in a Massive Avalanche