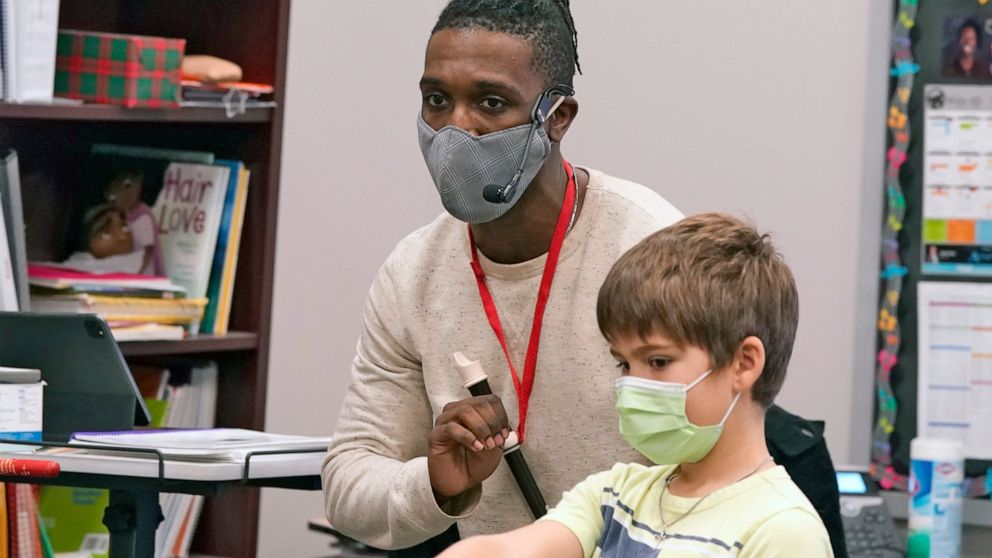 PRAGUE — The Czech Republic has launched a coronavirus testing program for the country’s teachers as students gradually return to school.

The program that started Friday and continues to Dec. 18 is designed to test up to 170,000 teachers. The free program is voluntary and uses rapid antigen tests.

In November, the country started testing residents of all nursing and retirement homes.

The Czech Republic was one of the hardest hit amid the recent resurgent of coronavirus infections in Europe. The country of 10.7 million has reported more than 537000 confirmed cases, including more than 8,600 deaths.

The number of new daily cases had been dropping for several weeks, but the trend might be reversing. The day-to-day increase of new cases reached 4,624 on Thursday, almost 600 more than a week earlier.

– Jobs report will show how much pandemic is squeezing hiring

– A World War II veteran from Alabama has recovered from COVID-19 in time to mark his 104th birthday.

— Authorities say a couple were arrested at a Hawaii airport after traveling on a flight from the U.S. mainland despite knowing they were infected with COVID-19.

— The U.N. chief is warning that the social and economic impact of COVID-19 “is enormous and growing.” Secretary-General Antonio Guterres said it’s foolish to believe a vaccine can undo damage from the global pandemic that will last for years or even decades.

ZAGREB, Croatia — Health officials say Croatia has ordered 5.6 million dozes of coronavirus vaccines and will start giving shots to people as soon as the vaccines are authorized for use in the European Union.

He says Croatia’s immunization program will be voluntary and initially focus on health workers, people with chronic health conditions and nursing home occupants.

The country of 4 million people has a strong anti-vaccination movement and has reported a recent surge of confirmed coronavirus cases despite tight restrictions.

BELGRADE, Serbia — Serbia is opening a new hospital for COVID-19 patients that was built to ease pressure on an overburdened health system.

Prime Minister Ana Brnabic formally inaugurated the hospital located just outside Belgrade. It has nearly 1,000 beds, including 250 for patients in intensive care units. The first patients will be admitted later Friday.

Brnabic says the new facility will take some of the load off other medical facilities, particularly in the capital. Belgrade’s hospitals are full and patients are being sent to other parts of the country.

Serbia also received a first batch of Russian vaccines against the new coronavirus for laboratory testing and verification. Officials have said the country wants to acquire all vaccines available and that citizens will be able to choose which one they want to receive.

In recent weeks, Serbia has reported thousands of new confirmed coronavirus cases in the Balkan nation of 7 million people.

BRUSSELS — Belgium says the country’s second coronavirus wave is well on the decline, with all major public health indicators showing improvement over the past week.

Despite the positive trend, authorities stressed there could be no relaxing of efforts to contain the virus during the Christmas season.

VIENNA — Austria has started voluntary mass testing for the coronavirus in a move that officials hope will help prevent long, hard lockdowns in the future.

The fast antigen tests started on Friday in Vienna and in the westernmost Vorarlberg and Tyrol provinces, days before Austria starts loosening tough lockdown measures that have been in place since mid-November. Positive tests will be backed up by conventional tests within 24 hours, and contacts quarantined if they are confirmed.

A special website has been set up for people to register for the tests.

The testing is being handled by the Austrian military, which has set up a big testing facility at the Vienna convention center with 170 test lanes.

Italy’s South Tyrol province, which borders Austria, already has conducted mass tests — following the example of Slovakia, which moved to slow infections and avoid a second lockdown by testing nearly two-thirds of its people in one weekend last month.

STOCKHOLM — Swedish Prime Minister Stefan Lofven says older people in retirement homes and staff in nursing homes, an estimated 570,000 people, will be the first to get vaccinated once European regulators give their approval.

He said Friday that after the European Medicines Agency and the European Commission approve a vaccine, “we will get started. The vaccine will reach all parts of our country.”

Lofven says the Scandinavian country that opted for a different approach to handling the pandemic by keeping large sections of society open and relied mainly on recommendations to its population, “must be ready to start as soon as the vaccine or vaccine arrives in the country.”

He says, “A year ago, we had not even heard of COVID-19. Now we are planning for vaccination. It is huge.”

He called it “a light in these dark weeks” and added it would be free of charge.

Johan Carlsson, head of Sweden’s Public Health Agency, warned that the pandemic isn’t over just because a vaccine arrives.

LONDON — America’s top infectious disease has apologized for suggesting U.K. authorities rushed their authorization of a COVID-19 vaccine, saying he has “great faith” in the country’s regulators.

Dr. Anthony Fauci, director of the National Institute of Allergy and Infectious Diseases, had sparked controversy with an earlier interview in which he said U.K. regulators hadn’t acted “as carefully” as the U.S. Food and Drug Administration.

Fauci said late Thursday that he meant to say U.S. authorities do things differently than their British counterparts, not better, but his comments weren’t phrased properly.

Fauci told the BBC: “I do have great faith in both the scientific community and the regulatory community at the U.K., and anyone who knows me and my relationship with that over literally decades, you know that’s the case.”

UNITED NATIONS — The White House coronavirus response coordinator says Americans must not gather indoors with outsiders or take off their masks at any time when they are outdoors — even when they are eating and drinking.

Dr. Deborah Birx says people also have to observe social distancing and wash their hands to contain the coronavirus pandemic. She says some states are taking these measures, but in others it’s “not happening at the level that they need to happen.”

Birx says that even once vaccines are approved, it will take weeks to months before “the most vulnerable individuals in America” can be immunized.

She made the comments after meeting with U.N. Secretary-General Antonio Guterres and General Assembly President Volkan Bozkir at U.N. headquarters in New York on Thursday.

SEOUL, South Korea — South Korea has recorded 629 new coronavirus cases over the past 24 hours, the highest daily tally in about nine months.

The Korea Disease Control and Prevention Agency said Friday that 600 of the newly confirmed patients were domestically transmitted cases — nearly 80 % of them in the densely populous Seoul area, which has been at the center of a recent viral resurgence.

After successfully suppressing two previous outbreaks this year, South Korea has been grappling with a fresh spike in infections since it relaxed stringent social distancing rules in October. Last week, it toughened distancing restrictions in the greater Seoul area and other places.

MONTREAL — The Quebec government is cancelling its plan to allow gatherings over four days of the Christmas holidays.

Premier Francois Legault announced Thursday that the province will no longer permit multi-household gatherings of up to 10 people from Dec. 24 through Dec. 27 as had been planned.

Legault first announced the Christmas plan on Nov. 19, saying people could get together as long as they quarantined for a week before and a week after the holiday period. But coronavirus infections, COVID-19 hospitalizations and deaths are on the rise and the province’s health system is deemed fragile due to a lack of staffing.

Legault says it’s not realistic to think the numbers will go down sufficiently by Christmas.

Level Up With the Loaded Whiskey Burger

How this dad lost 75kg and found his life again

Ingredients in Your Next IPA Might Come From Shipwreck Beer