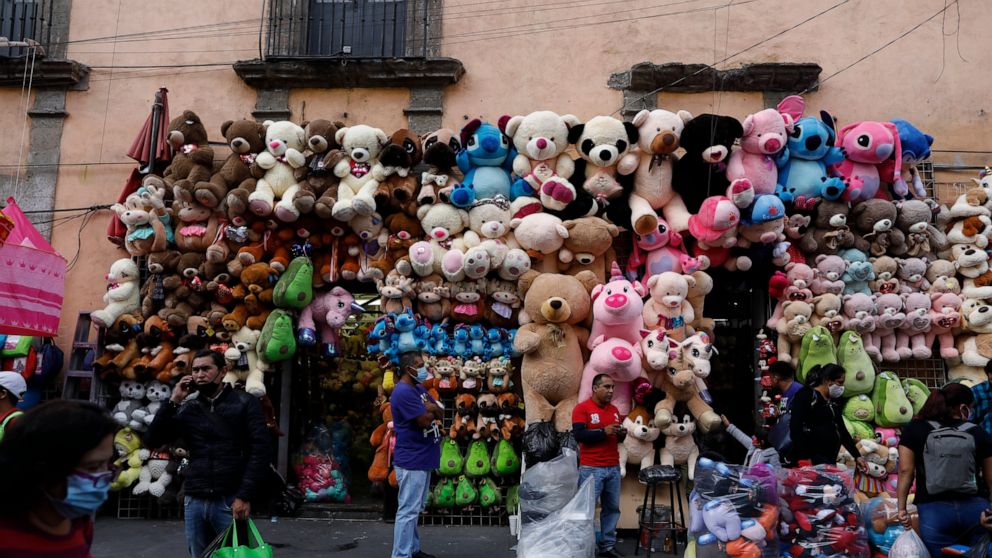 MOSCOW — Coronavirus infections in Russia hit a new record on Sunday, as the country’s authorities registered 29,039 new confirmed cases, the highest daily spike in the pandemic.

Russia has been swept by a resurgence of the virus this fall, with daily confirmed infections and deaths significantly exceeding those reported in the spring. Nevertheless, Russian authorities have rejected the idea of another nationwide lockdown or any widespread closures of businesses.

On Wednesday, President Vladimir Putin ordered a “large-scale” vaccination against COVID-19 to begin in Russia with the domestically developed Sputnik V vaccine that is still undergoing advanced studies needed to ensure its safety and effectiveness. Doctors and teachers will be first in line to get inoculated, Putin said.

Sputnik V has been offered to medical workers for several months even though the vaccine was still in the middle of advanced trials. Several top Russian officials said they had already gotten the required two jabs. The Russian military this week began vaccinating the crews of navy ships scheduled to depart on a mission.

— Most of California to enter sweeping new virus lockdown

BEIJING — Eight people in the northern Chinese city of Manzhouli have coronavirus after everyone in the city was tested following the discovery of two locally acquired infections, the official Xinhua News Agency reported Sunday.

Authorities conducted nucleic acid tests on 203,378 people in the city on the border with Mongolia in two rounds starting Nov. 22 and Nov. 27.

The city had 24 locally acquired cases as of Sunday, Xinhua said. It said 1,239 people who had close contact with them were under medical observation.

Under new restrictions effective Tuesday for three weeks, authorities will shut down karaoke rooms, fitness centers, indoor gyms and most of cram schools in the Seoul metropolitan area. Some high-risk facilities like nightclubs in the Seoul area have already been shut down.

Events must be under 50 people in the Seoul area and sports matches will be held without fans.

Park says South Korea has reported an average of 514 new virus cases each day in the past week, 375 of them in the Seoul area. South Korea reported 631 new cases Sunday, taking its total to 37,546 with 545 deaths.

SALEM, Ore. — The Oregon Medical Board has suspended the medical license of a doctor who said at a pro-Trump rally that he doesn’t wear a mask at his Dallas, Oregon, clinic.

KGW-TV reported Friday that Dr. Steven LaTulippe also said at the November rally that he also encourages others not to wear masks.

A state order requires health care workers to wear a mask in health care settings. The medical board voted this week to suspend LaTulippe’s license immediately due to concerns about patient safety.

Dr. Marya Strand, chief medical officer for SSM Health Cardinal Glennon Children’s Hospital, told the St. Louis Post-Dispatch that is treating adults who don’t have COVID-19 to take some of the pressure off other hospitals. St. Louis Children’s Hospital also has opened its doors to adults.

About 1,054 people were hospitalized in the St. Louis area Wednesday for COVID-19, including 221 patients in intensive care units. St. Louis-area hospitals are at about 82% capacity for in-patient beds and 81% capacity for ICU beds.

Staff at SSM Health and BJC Healthcare children’s hospitals have also started volunteering to work at other overwhelmed hospitals.

The Department of Health Services says on Twitter that people should wear masks “around anyone who isn’t a member of your household, even those you know and trust.”

Similarly, the department’s director, Dr. Cara Christ, says “we must act as though anyone we are around may be infected.”

The cases reported Saturday trailed only the record 10,322 cases reported Tuesday. Officials have said record high included data delayed by the Thanksgiving holiday weekend. There were four daily reports of more than 5,000 cases this week.

The hospitalizations for coronavirus rose to 2,931 on Friday, five times as many since early October. Republican Gov. Doug Ducey has not ordered a statewide mask mandate or curfews.

RALEIGH, N.C. — North Carolina reported a record increase in cases of the coronavirus and hospitalizations on Saturday.

The state reported 6,018 cases since Friday and 2,171 people with coronavirus in the hospitals. That’s up 14 from a day earlier.

“In less than a week, we went from exceeding 5,000 new cases reported in one day to exceeding 6,000,” said Dr. Mandy Cohen, the state’s health secretary. “This is very worrisome. This indicates we have even more viral spread across our state right now.”

North Carolina has a record number of people in intensive care, Cohen says. Another 49 people have died, bringing the confirmed total to 5,516, the health department says.

The rolling averages of cases rose from 2,843 per day on Nov. 20 to 3,044 on Friday. The daily average of deaths increased from 15 daily to 22 during the same period, according to data by Johns Hopkins University.

The increase is due largely to community spread, according Dr. Dale Bratzler of the University Oklahoma medical center. He says, “it’s typically places like restaurants, bars, gyms, places of worship.”

BOISE, Idaho — National Guard troops are directing people outside a Boise urgent-care clinic revamped into a facility for coronavirus patients.

Health officials say Idaho’s attempt to hold the coronavirus in check is failing as infections and deaths surge. They’ve halted elective surgeries to save bed space.

In a state where many citizens are resisting pandemic restrictions, overworked staff are getting sick or quitting to avoid the stress. It takes at least two days to get an appointment for a test. Primary Health officials say they’ll turn three more facilities into COVID-19 clinics by Dec. 30.

More than 1,000 people have died from the coronavirus in Idaho. Confirmed infections have surpassed 100,000.

“When we look at the number of daily deaths, we have doubled in numbers of daily deaths, again nationally and regionally in the past couple of weeks,” Dr. Adnan Munkarah, executive vice president and chief clinical officer for Henry Ford Health System in Detroit.

He’s concerned about the possibility of travel and family gatherings at the holidays.

Munkarah says the health system currently has 576 employees out because they have tested positive, have pending tests or are quarantined because of close contact.

That number is up nearly 200 workers from a week ago, he says.

Healthy summer staples for families on a budget

To grunt or not to grunt? What you can learn from the loudest tennis...