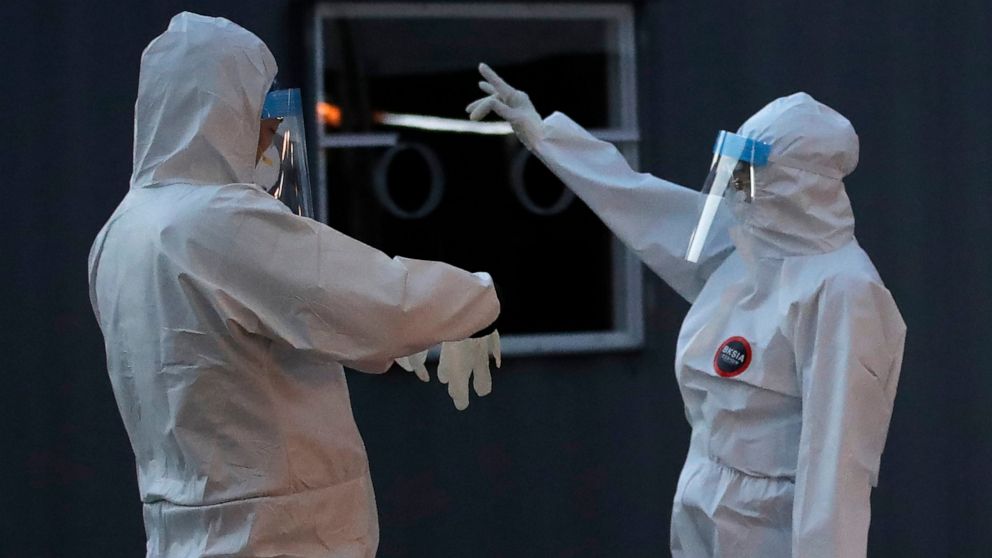 WASHINGTON — Health and Human Services Secretary Alex Azar says shipments of Moderna’s coronavirus vaccine will begin this weekend if the FDA grants emergency use authorization as expected on Friday.

Azar said the Moderna vaccine is “shockingly effective” and he expected to get vaccinated next week, if the White House physician cleared him to do so. Azar’s wife has tested positive for COVID-19 and he is quarantining at the moment.

U.S. officials debate who should be next in line for the vaccine

A weekend session appears necessary as it hits some snags and a top lawmaker warned that a government shutdown this weekend can’t be ruled out. All sides appear hopeful the wrangling won’t derail the legislation.

The central elements of the hard-fought aid compromise appear in place: more than $300 billion in aid to businesses; a $300-per-week bonus federal jobless benefit and renewal of soon-to-expire state benefits; $600 direct payments to individuals; vaccine distribution funds; and money for renters, schools, the Postal Service and people needing food aid.

LITTLE ROCK, Ark. — One in every five state and federal prisoners in the United States has tested positive for the coronavirus, a rate more than four times higher than the general population.

In some states, more than half of prisoners have been infected, according to data collected by The Associated Press and The Marshall Project.

As the pandemic enters its 10th month — and as the first Americans begin to receive a long-awaited COVID-19 vaccine — at least 275,000 prisoners have been infected and more than 1,700 have died.

New cases in prisons this week reached their highest level since testing began in the spring, far outstripping previous peaks in April and August.

BERLIN — Germany’s health minister urged for patience on Friday as the country prepares to start vaccinating people against COVID-19, saying those most at risk should be immunized first.

Jens Spahn said people in nursing homes would be the first to receive shots on Dec. 27, when Germany expects to roll out the vaccine.

About half of all Germany’s nearly 25,000 COVID-19 deaths were in people over 80 years of age, many of them in nursing homes.

Shortly after that, others in the top priority category will be able to get vaccinated, including medical staff working in critical care. Others, including police officers and teachers won’t receive the vaccine until later.

Spahn said Germany, a country of 83 million, expects to receive 11-13 million vaccine doses during the first quarter of 2021, but that the number can rise if further vaccines are approved by regulators.

Salvador Illa said Friday the Pfizer vaccines are due to arrive in Spain on Dec. 26.

He did not say how many doses Spain will receive initially. The country has said it will receive 140 million doses overall.

Spain says it hopes to vaccinate 2.5 million people in the first three months of 2021, starting with elderly people and health workers.

After declining substantially in recent weeks, Spain’s infections numbers are starting to rise again although they are still among the lowest in the European Union.

Illa said the “situation is worrying” and reiterated the need to abide by restrictions over the Christmas period.

COPENHAGEN, Denmark —Norway says it will receive around 50,000 coronavirus vaccines from Pfizer/BioNTech between Christmas and New Year.

The Norwegian government said on Friday that it will receive a first batch of 10,000 vaccines on Dec. 26 and not Dec. 24 as first announced.

The European Medicines Agency has moved up the assessment of the Pfizer-BioNTech vaccine to Dec. 21 and non-European Union member Norway is synchronizing the rollout with the rest of the bloc.

Friday’s report said that the Medicines and Medical Devices Agency of Serbia has approved the vaccine’s importation after reviewing the documentation from the U.S. and German companies.

Health Minister Zlatibor Loncar says an initial 5,000 doses will start arriving early next week and that vaccination will begin in nursing homes.

President Aleksandar Vucic has said that Serbia has ordered 340,000 doses of the Pfizer-BioNTech vaccine. The Balkan country has also received 20 doses of the Russian vaccine for testing. Officials have said citizens will be able to chose which vaccine they want to receive.

Serbia has faced soaring infections with the new coronavirus with thousands of new cases daily placing a huge burden on the country’s health system.

During a weekly radio broadcast on Friday, Orban said vaccinations will begin with health workers in the capital Budapest, followed by medics in regional hospitals.

He said the vaccination will be free and voluntary and urged health care workers to be vaccinated.

The country’s mass vaccination program is expected to begin early in the new year.

Hungary recorded 4,428 new coronavirus infections over the past day and 187 deaths. That brings the total number of infections in the nation of nearly 10 million people to 295,977, with 7,725 deaths.

ZAGREB, Croatia — Croatia has banned travel between various parts of the country ahead of Christmas and New Year holidays in a bid to curb down soaring coronavirus infections.

Authorities on Friday said that from December 23 to Jan 8 only essential services employees such as health workers and road maintenance crews will be allowed to move from one region to another. Special permits will be issued in exceptional cases.

Interior Minister Davor Bozinovic says the epidemiological situation does not allow for any easing of measures for the upcoming holidays. Croatia has reported thousands of new coronavirus infections daily for weeks which has overwhelmed the country’s health system.

BRUSSELS — More than 10,000 elderly people living in Belgian rest homes have died from COVID-19 since the start of the coronavirus pandemic.

Yves Van Laethem, a spokesman at Belgium’s coronavirus crisis center, told a news conference on Friday that the death of 10,270 rest home residents accounts for 56 percent of all the victims.

In a report published last month, Amnesty International said Belgian authorities “abandoned” thousands of elderly people who died in nursing homes and did not seek hospital treatment for many who were infected, violating their human rights.

One of the hardest-hit countries in Europe, Belgium has reported more than 618,000 confirmed virus cases and 18,371 deaths linked to the coronavirus.

During the first wave of the epidemic last spring, the European nation of 11.5 million people recorded a majority of its COVID-19-related deaths in nursing homes. Van Laethem said the situation has improved, but remains “precarious and difficult.”

In an interview Friday with the BBC, the ex-Beatle also downplayed the likelihood he’d go on tour next year to support his latest album released this week, “McCartney III,” saying it depends on how successful virus countermeasures are.

When asked if he would get a coronavirus vaccine, the 78-year-old McCartney said, “Yeah, I will yeah. And I’d like to encourage people to get it too, because with this it’s much more serious, and yeah, if I’m allowed to get it, I will.”

He said he’d love to play at Britain’s Glastonbury music festival in 2021, though he was skeptical organizers could stage it, noting that it would likely involve 100,000 people closely packed together, with no masks. “You know, talk about a superspreader,” he said.

WASHINGTON — The justices on the U.S. Supreme Court are being provided with doses of the coronavirus vaccine.

That is according to a letter by Capitol Physician Brian Monahan, which says the court, along with Congress and executive branch agencies are being given a limited supply of doses “for continuity of government operations.”

The doses are being provided under a directive by President Donald Trump that established continuity of government as a reason for vaccine prioritization. The Supreme Court and the other branches of government are supposed to be treated “in parallel.”

SEOUL, South Korea — South Korea has reported 1,062 new cases of coronavirus infections, its third straight day above 1,000 as the virus continues to slam the greater capital area where hospital beds are in short supply.

The cases reported Friday brought the national caseload to 47,515. There have been 645 deaths from COVID-19.

More than 760 of the new cases were in the densely populated Seoul metropolitan area, where health workers are struggling to stem transmissions.

Health officials have raised alarm about a looming shortage in hospital beds and intensive care units.

The viral resurgence has put pressure on the government to raise social distancing restrictions to maximum levels, something policymakers have resisted for weeks out of economic concerns.

Life in Adelaide too good to be true for JuricTomi Juric is enjoying life...

Crush Your Fitness Goals with These Recovery Tights – gearpatrol.com