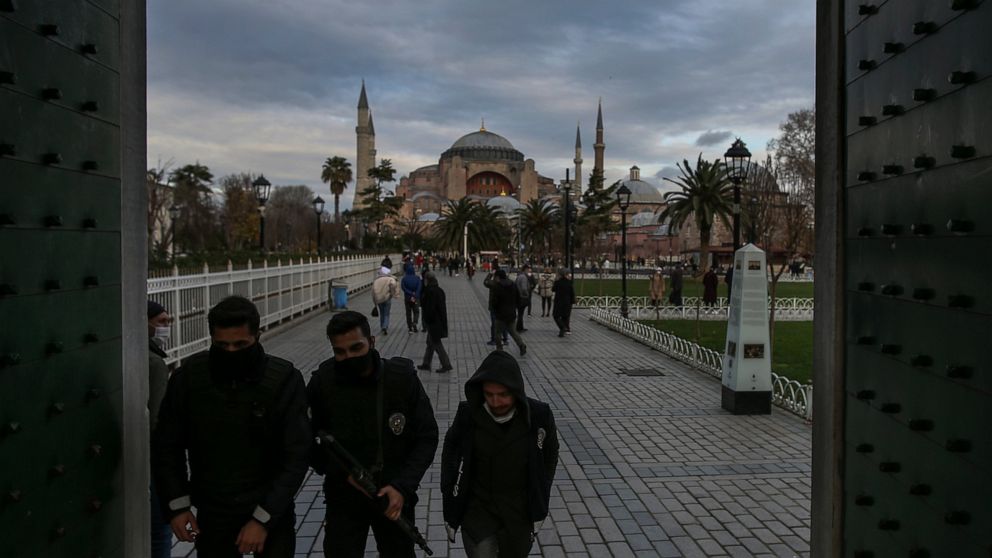 LONDON — Ireland’s prime minister says coronavirus restrictions will be tightened in the country amid concerns that the new variant of the virus identified in southeast England has spread across the Irish Sea.

In an address to the nation, Prime Minister Micheal Martin said the government was acting “quickly and aggressively” in response to rising infection rates and that it was proceeding on the assumption that the new variant, which is said to be more virulent than existing strains, was already in Ireland.

He said that in the last week, the country had seen “extraordinary growth in the spread of the virus.” Figures, he said, suggest the virus is growing by around 10% a day.

Among the new restrictions to be imposed over the coming days and to last until Jan. 12, Martin said restaurants and pubs selling food will have to close at 3 p.m. on Dec. 24. So-called “wet pubs” — those that don’t sell food — are already closed.

Shops and schools can stay open, he added.

Congress has easily passed a $900 billion pandemic relief package. It would deliver long-sought cash to businesses and individuals and resources to vaccinate a nation confronting a frightening surge in COVID-19 cases and deaths. The bill has been sent to President Donald Trump for his signature, expected in the coming days. The effort comes at the end of a year that’s become the deadliest in U.S. history. Preliminary data on U.S. deaths show the coronavirus pandemic contributing to a 15% or more increase in deaths over last year. U.S. deaths topped 3 million for the first time, and the percentage increase was the largest in a single year since 1918.

PRAGUE — The lower house of the Czech Parliament has approved a government plan to cut income taxes in an effort to help revive an economy hit by the coronavirus pandemic.

The annual cost of the cuts will reach some 100 billion Czech crowns ($4.6 billion).

As part of the measure, the lower house agreed to increase the flat write-off on personal income tax by 3,000 crowns annually for the next two years.

The cuts split the ruling coalition. It was pushed through by the centrist ANO (YES) movement by Prime Minister Andrej Babis with help from the right-wing opposition.

The other coalition party, the leftist Social Democrats, was against it, arguing it is unjust for low-income employees.

The tax reform had already been approved by the upper house, the Senate. President Milos Zeman said he would not veto it, meaning it will become effective in January.

The Czech central bank expects the economy to contract by 7.2% this year before bouncing back with 1.7% growth next year.

The 61-year-old leader of Bosnian Serbs was hospitalized on Saturday with stomach pains and nausea after first self-isolating following a meeting with a person infected with COVID-19.

Doctors said Tuesday that Dodik was confirmed positive with the coronavirus after a third test. They said he has pneumonia but is stable and feeling fine.

Bosnia’s health authorities reported 674 new cases and 85 deaths on Tuesday. The death toll is one of the highest in Bosnia since the start of the pandemic.

BERLIN — The head of Germany’s disease control center says it will probably be several weeks before infections in the country, which is nearly a week into a toughened lockdown, start to decline.

Germany has seen new coronavirus cases and deaths related to COVID-19 hit record highs over recent weeks, despite a partial shutdown in place since early November. Last Wednesday, nonessential shops and schools were closed in a bid to reverse the trend.

Lothar Wieler, the head of the Robert Koch Institute disease control center, said Tuesday that he fears the Christmas period is making the situation worse, despite restrictions on the number of people allowed to gather.

He appealed to people not to travel, to minimize contacts beyond their closest family and where possible meet others outdoors.

BELGRADE, Serbia — Serbia has received the first batch of 4,800 vaccines against the new coronavirus.

The vaccine developed by BioNTech and Pfizer arrived Tuesday by cargo plane at Belgrade airport. Video footage shows workers unloading special containers with the vaccines and transferring them into a truck.

Authorities have said that vaccination will start in the Balkan country’s nursing homes for the elderly in the coming days. They say more vaccines will arrive in the weeks and months ahead.

Serbia is also testing the Russian vaccine. Officials have said the citizens will be able to choose which vaccine they want to take.

Tuesday’s televised remark follows a tweet in which Veran said the first vaccines in the country would be administered from Sunday, the day after.

The European Medicines Agency had earlier approved the vaccine developed by Pfizer and BioNTech.

Veran said there is no indication that the new strain of COVID-19 detected in southern England has reached in France. France’s freight and travel connections with the U.K. are suspended until midnight.

TAIPEI, Taiwan — Taiwan has reported a locally transmitted case of COVID-19 — the first in 253 days.

The country’s Central Epidemic Command Center said on Tuesday that the patient is as a 30-year old female. She was found to be a close contact of a foreign pilot who was previously confirmed as having contracted the coronavirus.

Health officials are in touch with 167 contacts of both individuals, and have asked 13 of them to quarantine at home. An official said the pilot, who did not mention the woman as a close contact may be found in violation of Taiwan’s epidemic prevention laws and could be fined up to $10,000.

Taiwan has largely shielded itself during the pandemic, recording just seven deaths and 770 confirmed COVID-19 cases.

LJUBLJANA, Slovenia — Slovenia has launched rapid antigen testing across the country as part of efforts to curb coronavirus infections.

Dozens of people have lined up by mid-morning in Ljubljana to get tested. The results are back in 15 minutes and the citizens are informed by a message sent to their phones, the public broadcaster RTV Slovenia says.

Slovenian epidemiologists have said rapid tests could be particularly useful in detecting infected people who have shown no symptoms of COVID-19.

Slovenia in the past several days has seen a fall in the numbers of new cases of infection after weeks of strict anti-virus measures.

BERLIN — Germany has expanded its ban on passenger flights from the U.K. to forbid passenger transport by rail, bus and ship.

Health Minister Jens Spahn said the measure took effect at midnight, a day after flights were halted. A similar measure applies to South Africa, where a new variant of the coronavirus also has been detected.

The measures apply through Jan. 6. There are exceptions for freight and mail transport, and for medical and humanitarian flights.

A string of European and other countries halted air travel from Britain because of a new and seemingly more contagious strain of the coronavirus in England.

A leading German virologist who was initially skeptical about reports that the strain was much more contagious voiced concern after seeing more data. Christian Drosten, a professor of virology at Berlin’s Charite hospital, tweeted that “unfortunately it doesn’t look good.”

But Drosten added that the mutation has so far increased only in areas where there was a high or rising rate of infection, meaning that reducing contacts works against its spread.

ANKARA, Turkey — Turkey has identified and quarantined 4,603 airline passengers who arrived from the United Kingdom on and after Dec. 14, Turkish Health Minister Fahrettin Koca said Tuesday.

Flights from the U.K., South Africa, Denmark and the Netherlands were suspended on Sunday evening in response to a new strain of coronavirus said to be circulating there.

Koca tweeted that 335 passengers flying from those countries at the time of Sunday’s announcement were tested for the virus on arrival in Turkey and isolated.

Many countries have restricted travel, primarily from Britain, after the new strain was described as spreading rapidly there.

SEOUL, South Korea — South Korea will prohibit private social gatherings of five or more people and shut down ski resorts and major tourist spots nationwide starting on Christmas Eve as it contends with a surge in coronavirus infections.

The restrictions announced Tuesday extend to a national level similar rules set earlier by authorities in the Seoul metropolitan area. It is the most serious step the government has taken to reinstate social distancing after months of easing.

Prime Minister Chung Sye-kyun says the measures will be in place at least until Jan. 3.

The Seoul area has been at the center of a viral resurgence that has overwhelmed hospitals and increased death tolls. The surge has put pressure on the government to raise social distancing restrictions to maximum levels, something policymakers have resisted for weeks out of economic concerns.

Visitors will also be prohibited at nursing homes and long-term care facilities, and churches and other religious facilities will be shut. Restaurants cannot seat groups of five or more people, must maintain social distancing between diners and could face fines for violations.

OLYMPIA, Wash. — Washington state Gov. Jay Inslee has announced new travel restrictions for people arriving from the United Kingdom and South Africa, where a seemingly more contagious strain of the coronavirus is circulating.

Inslee said Monday he will order travelers coming from either of those two nations to quarantine for 14 days. He says the order will cover passengers who have arrived from those countries in the past few days.

Inslee says the quarantine measures are precautionary and meant to stem a possible surge in cases that could overwhelm hospitals.

The quarantine is mandatory and although it is legally enforceable, Inslee says no one will be taken into custody over it.

WASHINGTON — Two of the U.S. military’s top officers have received the coronavirus vaccine.

Other members of the Joint Chiefs are also expected to get shots as part of a campaign to reassure those serving in the military branches that the vaccine is safe.