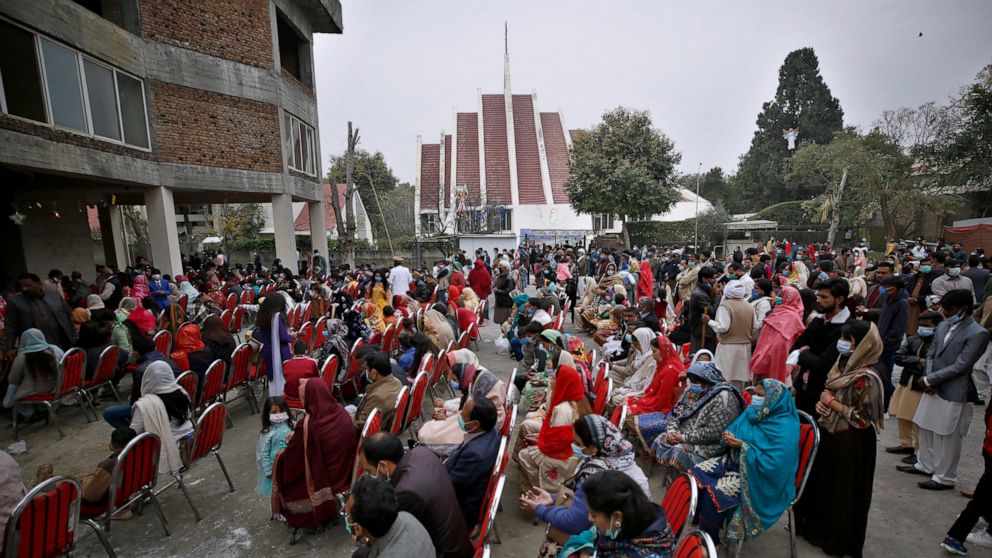 ROME — Curfews, quarantines and even border closings complicated Christmas celebrations Friday for countless people around the globe, but ingenuity, determination and imagination helped keep the day special for many.

Pope Francis delivered his Christmas blessing from inside the Vatican, breaking with his traditional speech from the balcony of St. Peter’s Basilica to tens of thousands in St. Peter’s Square. But tourism in Italy has virtually vanished in the pandemic and the government’s coronavirus restrictions for the holidays foiled any plans by locals to flock to the square.

Citing a cause for optimism amid the pandemic’s bleakness, Francis said the invention of COVID-19 vaccines shines “lights of hope” on the world. In a passionate appeal to leaders, businesses and international organizations, he said they must ensure that the most vulnerable and needy in the pandemic be first in line to receive the vaccines.

Bells rang out around Bethlehem on Friday as the traditional birthplace of Jesus celebrated Christmas Day. But the closure of Israel’s international airport to foreign tourists, along with Palestinian restrictions banning intercity travel in the areas they administer in the Israeli-occupied West Bank, kept visitors away.

In Beijing, official churches abruptly cancelled Mass on Christmas Day in a last-minute move, after China’s capital was put on high alert following the confirmation of two confirmed COVID-19 cases last week, and two new asymptomatic cases were reported on Friday. One of several notices was posted at Beijing’s St. Josephs’ Church, which was built originally by Jesuit missionaries in the 17th century.

Border crossing closures kept thousands of migrants from economically devastated Venezuela who live in Colombia from going home for Christmas. Colombia’s government shut down the crossings in a bid to slow down the spread of COVID-19 infections. Those trying to return home for the holidays this year had to turn to smugglers.

Yakelin Tamaure, a nurse who left Venezuela two years ago, won’t be going home and said there will be no gifts or new clothes for her two children, aged 10 and 15. Tamaure said that she hasn’t been able to find work as a nurse because she still doesn’t have a Colombia residence permit. Her parents are still in Venezuela.

“My mother broke her foot and can’t walk properly so I’m worried about her,” said Tamaure. “I try to send her money, but its not the same as being there.”

Others successfully crossed borders elsewhere only to find themselves in quarantine. For their first Christmas since getting married in March, Nattasuda Anusonadisai and Patrick Kaplin are cooped up in quarantine in a Bangkok hotel room. It wasn’t great fun but they did make sure to get a Christmas tree.

They returned earlier this month from a 4 1/2-month trip to Canada and the United States, making a 32-hour journey from Montreal via Doha. One condition of entering Thailand is a 14-day quarantine upon arrival. Thai citizens can stay at state facilities for free but foreigners like Kaplin, from Canada, must pay to stay at an approved hotel, the option the couple took so they could stay together.

“The hotel was surprised that we ordered a full-sized Christmas tree but didn’t give us too much trouble to bring it in,” said Anusonadisai. But they hadn’t ordered enough ornaments, so they put items collected on their travels, like an eagle feather, and, of course, masks.

“We will continue this tradition now, since it’s nice to see so many personal memories on the tree,” Kaplan said.

Churches in South Korea have ignited clusters of coronavirus infections in densely populated Seoul, along with hospitals, nursing homes, restaurants and prisons. The 1,241 new daily cases reported by the Korea Disease Control and Prevention Agency on Friday was a record for the country.

Song Ju-hyeon, a resident in Paju, near Seoul, who is expecting a child in February, said home is the only place she feels safe now.

“It doesn’t feel like Christmas anyway, there’s no carols being played on the streets,” she said.

It’s Christmask,” the Daily Nation newspaper declared in Kenya, where a second surge in cases has eased and a brief doctors’ strike ended on Christmas Eve. Celebrations were muted in East Africa’s commercial hub as overnight church vigils could not be held because of a curfew. Fewer people also reportedly headed home to see families, which could help limit the spread of the virus to rural communities, which are even less equipped to handle COVID-19 than cities.

In Paris, members of Notre Dame Cathedral’s choir, wearing hard hats and protective suits — not against COVID-19 but for construction conditions in the medieval landmark ravaged by fire in 2019 — sang inside the church for the first time since the blaze.

In a special Christmas Eve concert, accompanied by an acclaimed cellist and a rented organ, the socially distanced singers performed beneath the cathedral’s stained-glass windows amid the darkened church, which is transitioning from being a hazardous clean-up operation to becoming a massive reconstruction site. The public isn’t expected to see the interior of Notre Dame until at least 2024.

Elsewhere, Christmas was a difficult time. Thousands of drivers were stranded in their trucks at the English port of Dover, lacking the coronavirus tests that France was now demanding. The British army and French firefighters were brought in to help speed up the testing and free food was distributed.

Others struggled with the virus travel restrictions that kept them from visiting family or friends for the holidays.

“The solitude gets to me these days. I often feel depressed,” said Alvaro Puig, an 81-year-old in Spain who spent Christmas Eve eating dinner alone with his pet rabbit. “These holidays, instead of making me happy, make me sad.”

AP correspondents contributed to this report from around the globe.

Five germs to look out for as COVID restrictions lift

Petite people are stuck with colder hands in winter — sorry

Zero to hero: The best (and worst) cereals for your health