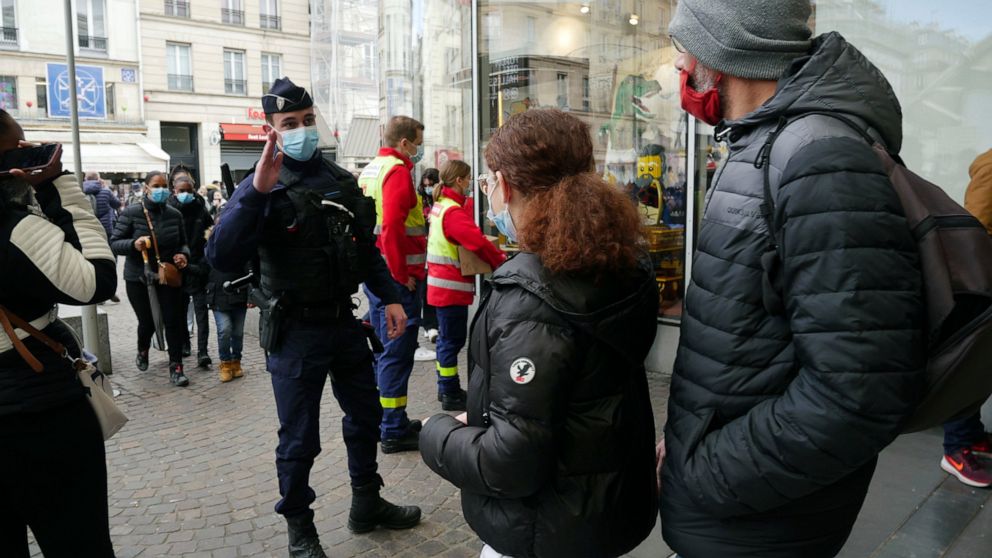 ROME — The new Italian government says it aims to have 80% of the population vaccinated against COVID-19 by the end of September.

Premier Mario Draghi’s office on Saturday announced more goals of the national vaccination program, which only recently has started picking up its pace after delays in vaccine deliveries and other logistics slowdowns.

Just under 2 million people in Italy – or roughly 3% of the population – had been fully vaccinated as of Saturday.

On Monday, much of the country, including Rome’s region, Lazio, will be put under tougher restrictions on citizens’ movements outside the home. Hospitals are struggling with an increase of ICU admissions for COVID-19 patients. Daily new caseloads of confirmed infections have soared above 20,000 in recent days, including on Saturday, with the Health Ministry reporting 26,062 cases.

Italy has now tallied some 3.2 million cases in the pandemic. After Britain, Italy has Europe’s second-highest known death toll, with 101,881 dead.

— Virus tolls have been similar in U.S. states despite governors’ contrasting actions

— By some measures, the panedemic’s been more costly for U.S. than World War II

— In a pandemic, the Navajo community steps up for the vulnerable

— IRS says new round of COVID relief payments on the way

— After a long pandemic year, a changed New York shows signs of revival

PHOENIX — Arizona on Saturday reported 262 new cases of COVID-19 — the lowest one-day total since September at the trough between the summer and winter surges.

The state has now recorded 823,094 cases and 16,546 deaths with the 27 newly reported. Hospitalizations for the disease dropped to 814, down from the Jan. 11 pandemic peak of 5,082, according to the state’s coronavirus dashboard.

The state also reported fewer than 1,000 additional cases on three of the previous six days.

But the state Department of Health Services announced late Friday it has detected three cases of a fast-spreading variant of the coronavirus that was first discovered in Brazil. It’s unclear how widespread that variant is in Arizona, but studies indicate vaccines are effective against it, the department said in a news release.

Also Friday, Gov. Doug Ducey said Arizona can meet President Joe Biden’s goal to offer vaccinations to everyone who wants one by May as long as the federal government supplies enough vaccines.

WASHINGTON – Commercial air travel appears to be on the upswing despite the coronavirus pandemic.

Spokesperson Lisa Farbstein said in a tweet that the last time the number was that high was March 15, 2020 – about a year ago.

Farbstein included a reminder in her tweet, saying “if you choose to fly, wear that mask!”

President Joe Biden marked Thursday’s first anniversary of the pandemic with a prime-time address to the nation in which he said he expects to have enough coronavirus vaccine for all Americans by May 1.

BUDAPEST— Hungary reported a record-breaking day of new COVID-19 cases on Saturday, and the number of patients being treated in the country’s hospitals also reached a new high.

Health authorities announced 9,444 new confirmed cases, more than 1,000 more than the previous record set on Friday. The jump came amid a rapid spread of a coronavirus variant first discovered in the United Kingdom.

The outbreak has put a strain on Hungary’s health care system. Officials reported the hospitalization of 179 more COVID-19 patients, bringing the national total to a record high of 8,897

Hungary has the second-highest COVID-19 vaccination rate in the 27-nation European Union, underpinned by the acquisition of vaccines from Russia and China as well as the EU. The number of people who have received at least one dose of a vaccine climbed to nearly 1.3 million in the country of fewer than 10 million.

Officials say they plan to have all people over age 60 vaccinated by Easter.

As of Saturday, Hungary reported 16,790 virus-related deaths since the beginning of the pandemic, giving the country the seventh-worst death rate per 1 million people in the world, according to Johns Hopkins University.

TBILISI, Georgia — Georgia received its first batch of coronavirus vaccines on Saturday and is set to become the last European country to launch a COVID-19 vaccination drive.

The ex-Soviet nation received 43,200 doses of the AstraZeneca vaccine through the COVAX program, a United Nations=backed initiative aimed at ensuring equal access to vaccines. Georgia’s second shipment of 87,000 vaccines is expected next month.

Georgian Health Minister Ekaterina Tikaradze said the country will start administering the vaccine on Monday, with the first shots given to medical workers.

Georgia hopes to vaccinate 60% of its population of 3.7 million this year.

The country has engaged in talks to receive additional batches of the AstraZeneca and Moderna vaccines. Georgia is also negotiating with China to receive the Sinovac vaccine.

THE HAGUE, Netherlands — Police in France have arrested a Dutch man and an American man suspected of involvement in the stabbing of two Dutch police officers in the northern Dutch city of Groningen.

The incident happened after the officers questioned two men who were outdoors during the Netherlands’ coronavirus curfew on Wednesday night.

One of the police officers suffered serious injuries to his face and neck in the stabbing.

One was a 20-year-old Dutch man and the other a 32-year-old American national. Their identities have not been released.

Police say procedures are underway to have the suspects sent back to the Netherlands.

VIENNA — Police in Austria are enforcing new rules requiring people to show a negative coronavirus test to leave Wiener Neustadt, a city of more than 45,000 people.

The system that took effect Saturday involves police and other officials controlling 26 exit roads from the city south of Vienna around the clock. Wiener Neustadt has an exceptionally high level of coronavirus infections — more than 500 new cases per 100,000 inhabitants over seven days, compared with a national average of 198 per 100,000.

Mayor Klaus Schneeberger said testing stations set up in recent days have a capacity to test 15,000 people per day. He said he didn’t understand why Austria’s health ministry “doesn’t use this occasion to start a vaccination campaign here so we get this under control.”

A targeted campaign to vaccinate the entire adult population is underway in the Schwaz district in western Austria, which has seen a significant number of cases of the more contagious virus variant first detected in South Africa.

BERLIN — The leaders of Austria, Slovenia, the Czech Republic, Latvia and Bulgaria are calling for talks among European Union leaders about the distribution of vaccines within the 27-nation bloc.

Austrian media reported Saturday that the five leaders wrote a joint letter to European Commission President Ursula von der Leyen and European Council President Charles Michel. That came after Austrian Chancellor Sebastian Kurz complained on Friday that, even though the EU had agreed on distribution of the vaccines on a per-capita basis, some countries were receiving considerably more than others.

The letter asserted that “if this system were to carry on, it would continue creating and exacerbating huge disparities among Member States by this summer.”

Officials elsewhere have noted that countries have wanted differing amounts of various vaccines and have not always taken up their full allocation.

Austria’s health ministry — which is run by Kurz’s junior coalition partner — was among those rejecting Kurz’s criticism. Oe1 radio reported that its general secretary, Ines Stilling, said negotiations on distributing the vaccines had been “balanced and transparent.”

AMMAN — Jordan has become the first country in the Middle East to receive coronavirus vaccines through the global COVAX initiative.

A plane carrying 144,000 shots of AstraZeneca vaccine landed in Amman’s airport late Friday and was greeted by representatives of the agencies supporting the COVAX program — the United Nations, the World Health Organization and the European Union.

The COVAX alliance aims to share COVID-19 vaccines with more than 90 lower and middle-income nations. However, the program is facing delays, underfunding and limited supply.

The EU has allocated 8 million euros to support Jordan’s purchase of vaccines. A second shipment from COVAX is expected in April.

Jordan launched its vaccination drive in mid-January with plans to inoculate over 4 million residents in 2021, according to Health Minister Nathir Obeidat.

The kingdom, home to nearly 10 million people, has approved five vaccine types, including Russian and Chinese ones. The vaccination campaign also targets some of the 650,000 Syrian refugees.

The country is struggling to contain the surge of infections. It has reported over 465,000 cases and more than 5,200 deaths.

COLOMBO, Sri Lanka: Sri Lankan health authorities said on Saturday that they will continue to use the AstraZeneca vaccine and that health workers have begun inoculating people over 60.

Sri Lanka has so far received 1.264 million doses of the vaccine and, by Saturday, 760,765 Sri Lankans had received a shot.

The Health Ministry said on Saturday that it is continuing to use the AstraZeneca vaccine despite it being suspended in some countries, including Denmark.

According to State Minister Channa Jayasumana who oversees pharmaceutical production, supply and regulation, Sri Lanka has not yet taken a decision to suspend the vaccine.

Sri Lanka received 500,000 doses of the vaccine from India as a donation, while the island nation bought the same number again from the Serum Institute of India. It received another 264,000 doses from the COVAX facility.

Sri Lanka has also planned to purchase some 13 million doses of the AstraZeneca vaccines directly.

ISLAMABAD — The provincial government in Pakistan’s largest province, Punjab, has announced the shutting of 15 famous shrines, including that of the Sufi saint famously known as Data Ganj Bakhsh in Lahore, amid the third wave of the coronavirus.

Federal authorities earlier announced the closing of educational institutions for two weeks in seven cities in Punjab and some in northwestern Khyber Pakhtunkhwa province.

WASHINGTON — U.S. health officials are warning health professionals about the risk of false positive results with a widely used laboratory test for COVID-19 and flu.

The Food and Drug Administration issued the alert to Friday for health facilities using Roche’s cobas test for coronavirus and seasonal flu. The agency warned that problems with the test’s processing tubes could result in false diagnosis in people who are not actually infected.

The FDA recommends health workers test samples multiple times to help assure accuracy. If the test delivers conflicting results it may indicate a problem and use should be discontinued, the agency says.

Jeff Bezos Is Going to Space. If You’ve Got the Money, So Could You

Outfit sparks most vulgar joke in tennisGermany’s Alexander Zverev throws his racquet during his...

Ash Barty is a false world No. 1Ash Barty now has to prove she...