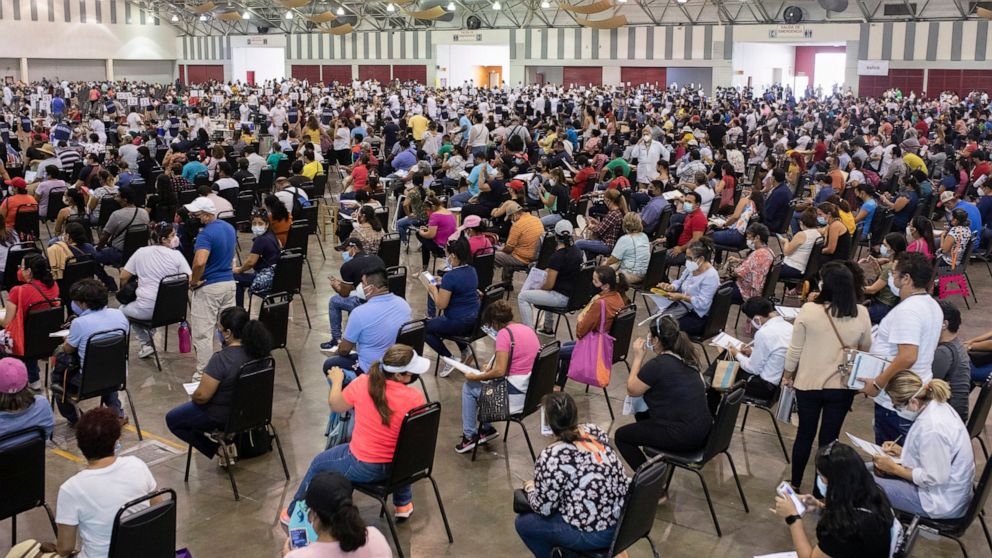 ROME — Italy is distributing 184,000 doses of Johnson & Johnson coronavirus shots to regional vaccination centers and recommending it for people aged over 60 following the latest evaluation from the European drug regulatory agency.

Italy’s health ministry and pharmaceutical agency gave the green light for the shot after a precautional suspension following reports the shot might be linked to very rare blood clots.

The EMA on Tuesday found a possible link between the vaccines and very rare blood clots but said the benefits outweighed the risks.

After the ruling, the Italian government decided to recommend the shot for people over 60, a similar recommendation it made for AstraZeneca shots that also were linked to possible clots.

Italy’s virus commissioner said in a statement that starting Wednesday, the initial 184,000 doses of Johnson & Johnson shots that were waiting in storage pending the EMA review will be distributed to Italy’s regions.

— The U.S. military says most prisoners at the Guantanamo Bay detention center have now received the first dose of the COVID-19 vaccine

— The powerful Church of Greece says it will allow the faithful to take part in Orthodox Easter services next week but limit attendance and hold the services earlier in the day to conform with a government-imposed curfew.

— Many people of means from Latin America are traveling thousands of miles to get the COVID-19 vaccine in the United States because supplies are limited in their own countries.

BANGKOK — Thailand plans to purchase 35 million more doses of COVID-19 vaccines on top of the 65 million it has already contracted amid criticism of a slow start of the vaccination campaign.

Prime Minister Prayuth Chan-ocha’s announcement on his Facebook comes as Thailand is battling a third wave of infections that has resulted in record daily cases. Health authorities on Wednesday announced 1,458 new confirmed cases and two deaths, bringing the totals to 46,643 cases including 110 deaths.

Prayuth’s administration has been sharply criticized for failing to secure enough vaccines, with only about 2 million doses from AstraZeneca and China’s Sinovac delivered so far and most of the remainder due starting in June.

Only about 1% of Thailand’s 69 million people have received at least one dose.

Prayuth’s post says the additional doses would be purchased from two or three more companies, and 10 million to 15 million of those would be handled by the private sector. Prayuth said Tuesday the government is in talks with Pfizer for supply of 5 million to 10 million doses whose delivery would start in July and be completed by December.

The total of 100 million doses would be enough to inoculate 70% of Thailand’s population.

NEW DELHI — India has reported a new record 295,041 coronavirus cases, as the death toll crossed 2,000 for the first time.

Even with hospitals struggling, Prime Minister Narendra Modi on Tuesday advised state governments against imposing a harsh lockdown in favor of micro-containment zones as he sought to avoid another economic slump.

The surge in India has exacerbated the slowdown in global vaccination campaigns. India is a major vaccine producer but was forced it to delay deliveries of shots to focus on its domestic demand. So far, India has administered over 130 million doses of vaccines in a nation of nearly 1.4 billion since mid-January.

Overall, India has reported more than 15.6 million confirmed cases, the second highest behind the United States. The number of deaths stood at 182,553.

HONOLULU — Hawaii officials are moving forward with a plan to allow people who have been fully vaccinated against the coronavirus to skip pre-travel testing and quarantine requirements for flights between islands.

The rule, for now, is only for people who have received vaccinations in Hawaii and for travel within the state.

The plan does not change anyone’s ability to travel and avoid quarantine by testing, but adds another option for those who have received the shots.

TORONTO — Prime Minister Justin Trudeau is extending travel restrictions that make it mandatory for air travelers to quarantine in a hotel at their own expense when they arrive in Canada.

He’s also thanking the country’s two major airlines for extending a voluntary suspension of flights to Mexico and all Caribbean destinations until May 21. The measures were first announced in January.

Trudeau is reiterating that now is not the time to travel. He says Canada’s strict travel, testing, and quarantine measures are extremely important. But he notes international travel directly accounts for a small amount of cases in Canada and those restrictions are just one tool to fight the pandemic.

Canada is seeing a third wave of infections particularly in Ontario where Premier Doug Ford was slow in re-imposing lockdown restrictions.

NEW YORK — General Motors is joining the growing list of companies that will provide more flexible work options for its employees as more people get vaccinated amid the coronavirus pandemic.

GM Chairman and CEO Mary Barra said in a post on LinkedIn on Tuesday that the automaker will allow its employees to have the flexibility to work where they can have the greatest impact on achieving the company’s goals, as long as the job lends itself to such a situation. Called “Work Appropriately,” GM says its approach is based on the belief that its employees are “capable of making smart decisions without overly prescriptive guidance.”

The announcement comes a month after Ford Motor Co. told about 30,000 of its employees worldwide who have worked from home that they can continue to do so indefinitely, with flexible hours approved by their managers. Ford plans to use a work-office “hybrid”: employees will commute to work mainly for group meetings and projects best-suited for face-to-face interaction.

ROME — Italy has opened its latest coronavirus vaccination hub in one of Rome’s most iconic cultural spots: The Cinecitta film studios where “La Dolce Vita,” “Ben Hur” and other gems of Italian cinema were made.

Romans getting their shots Tuesday were treated to posters of movie stars and inspirational messages (“Be happy!”) from the likes of Sophia Loren and Roberto Benigni surrounding them in the waiting room of the vast studio-turned-vaccine center.

Culture Minister Dario Franceschini was on hand for the opening, saying Cinecitta held a “glorious place” in the history of Italian film but also an important place for the present and future of Italian movie-making post-COVID.

The Cinecitta studios now join Rome’s main train station, auditorium and conference center as hubs for vaccinations in the Eternal City, part of the government’s effort to rapidly increase the pace of shots in the onetime epicenter of Europe’s outbreak.

INDIANAPOLIS — Two national drugstore chains say they have largely finished the job of delivering COVID-19 vaccines to residents and staff of most long-term care locations.

CVS and Walgreens started sending teams of health care workers to nursing homes, assisted-living locations and other sites in December. They have delivered a combined total of 7.7 million COVID-19 vaccine doses so far.

COVID-19 caused more than 646,000 cases and 131,000 deaths in long-term care facilities. But weekly totals for new cases have declined more than 90% since the vaccination program started, according to the American Health Care Association, which represents most nursing homes.

JERUSALEM — Israel’s prime minister says he is planning a new round of vaccinations in six months, possibly involving children.

Prime Minister Benjamin Netanyahu says Pfizer and Moderna have agreed to supply an additional 16 million vaccines to Israel. He says, “So prepare your arms, muscles for those who want, and the children as well. Our estimate is that by then, there will be approved vaccines for children.”

Many health experts believe people who are vaccinated may need to receive boosters to maintain their immunity levels.

Israel carried out an aggressive vaccination push in which nearly 90% of the adult population has either been inoculated or recovered from COVID-19. This has allowed the government to reopen schools, stores, restaurants and its main airport in recent weeks. This week, the government said people no longer must wear masks outdoors – ending a year-long restriction.

Israel has come under criticism from U.N. officials and human rights groups for not sharing more of its vaccines with the Palestinians in the West Bank and Gaza Strip. Israel says that under previous diplomatic agreements, it is not responsible for vaccinating the Palestinians. The Palestinian Authority has been working to secure its own vaccine supplies, in large part through the U.N.-backed COVAX program, but lags far behind Israel.

DES MOINES, Iowa — Nearly half of Iowa’s counties have turned down shipments of COVID-19 vaccine because of a lack of demand, state officials said while trying to drum up interest in the shots with a public information campaign.

The state Department of Public Health has told counties to decline doses when they can’t ensure they can use them all, said spokeswoman Sarah Ekstrand.

The state reported Tuesday that 43 of Iowa’s 99 counties declined additional shipments of the vaccines. Of the 43, the U.S. Centers for Disease Control and Prevention has identified 12 as having a high rates of coronavirus infections.

López Obrador got a dose of the AstraZeneca vaccine from a military nurse at his daily morning press conference.

“It doesn’t hurt, and what is more, it protects us all,” says López Obrador, urging all Mexicans over age 60 to get vaccinated.

The president had said in March he would hold off on getting the shot because he still had antibodies after being infected in January. But he later changed his mind upon the recommendation of his doctor to get vaccinated. He also said he wanted to set an example for others to get the shot.

The 67-year-old president was scheduled to get his shot in the first week of April, along with other over-60s in central Mexico City.

While López Obrador sought to set an example with the vaccine, he has expressed disdain for masks. He’s refused to make them mandatory in public spaces, saying it would violate individual liberties.

The Cowboy Boots Guide: 11 Pairs to Add Some Twang to Your Wardrobe

The only thing you need to choose healthy packaged foods

‘I can’t do it’: Broken Bett’s emotional pleaBetts and Walker were former teammates.