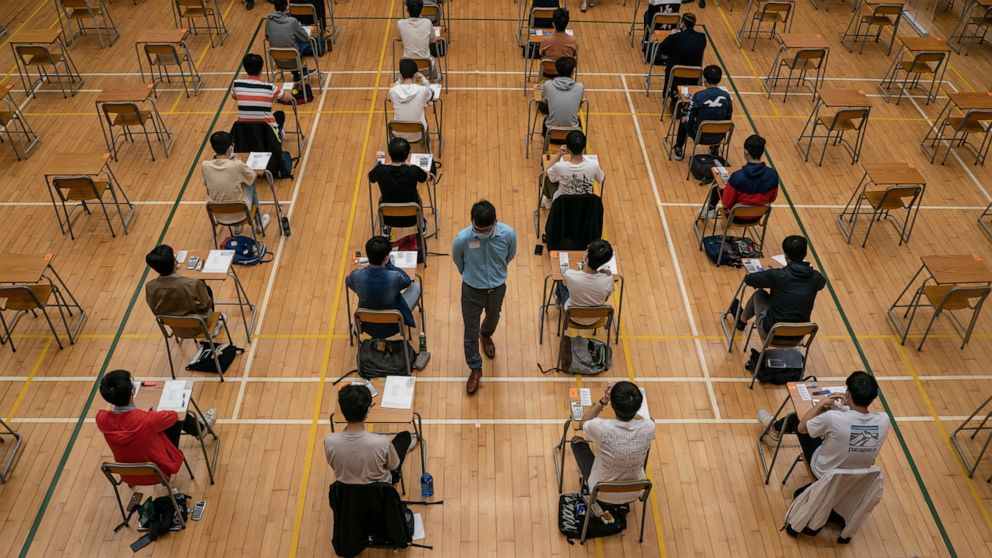 ISLAMABAD — Pakistani authorities are racing against time to add more beds and ventilators at hospitals amid a surge in deaths and coronavirus infections.

Pakistan says it will be forced to impose a nationwide lockdown if the COVID-19 situation does not improve this week.

It comes a day after Pakistan closed schools in high-risk areas but refused to delay exams, ignoring protests from students.

— Italy’s gradual reopening after six months of rotating virus closures is satisfying no one: Too cautious for some, too hasty for others

— President Joe Biden is rounding out his first 100 days in office, and focusing on reining in the coronavirus seems to have paid off

— Jobs at hotels, restaurants and other tourism-dependent businesses may fall short in a hoped-for bounce-back summer

THE HAGUE, Netherlands — The Netherlands is banning passenger flights from India, where coronavirus infections are surging to record levels.

The government says the ban comes into force Monday evening and initially lasts until May 1. Flights carrying cargo and medical staff are exempt.

About seven flights a week arrive in the Netherlands from India.

The Netherlands already has flight bans in place from South Africa and nations in South America.

The Netherlands also has pledged 1 million euros ($1.2 million) in aid to help India tackle the surge in infections.

Caretaker Minister for Development Cooperation Sigrid Kaag said it is “heart breaking to see the consequences of corona in India.”

TOKYO — Japan will step up border controls at airports after health authorities found 21 cases of a new double-mutant Indian variant experts say could be more contagious.

Chief Cabinet Secretary Katsunobu Kato said Monday all but one of the 21 variant cases were detected in arrivals at Japanese airports.

The variant has two mutations in the spiky protein that the virus uses to fasten itself to cells. India is experiencing the world’s worst surge in virus cases partly due to the variant. Experts fear it could worsen Japan’s ongoing surge that is being fueled by another variant detected earlier in Britain.

Japan started emergency measures Sunday in Tokyo, Osaka and two of its neighboring prefectures, closing down bars, karaoke, department stores, theaters and museums and other nonessential businesses and requiring staying home and other preventive measures for the residents until May 11.

The third state of emergency in Japan three months before a scheduled opening of the Olympics in July is bringing into question if or how the country can safely hold the events.

Kato said Japan will step up border controls and collect and analyze data on the variants to prevent the further spread of the infections.

BANGKOK — Cinemas, parks and gyms were among venues closed in Bangkok on Monday as Thailand sees its worst surge of the coronavirus pandemic.

A shortage of hospital beds, along with a failure to secure adequate coronavirus vaccine supplies, have pushed the government into imposing the new restrictions, though no nationwide lockdowns, curfews, or travel bans. Health care workers say the measures are not enough to relieve overburdened hospitals.

Thai health authorities on Monday announced 2,048 new cases and eight deaths, bringing the totals to 57,508 cases and 148 deaths. The Thai capital has seen a rapid rise in infections since early April.

The latest measure aimed at curbing the spread of the virus is a fine of up to 20,000 baht ($636) for failing to wearing face masks in indoor and outdoor areas in 48 provinces including Bangkok.

Starting Monday, 31 types of venues in the capital, including cinemas, parks and gyms, were closed for two weeks, and gatherings of more than 20 people are banned. Shopping malls and department stores may open for limited hours.

Thailand also has banned the entry of visitors coming from India, excepting its own citizens. The ban takes effect May 1.

PERTH, Australia — The Australian west coast city of Perth will lift a three-day lockdown after no new COVID-19 infections were detected on Monday.

The lockdown of the city of 2 million people was called on Friday after a man who returned to Australia from a wedding in India infected two people in Perth last week.

“I wish we didn’t have to go into lockdown. But it has been necessary and it’s worked. This virus is so unpredictable,” McGowan said.

Nightclubs and the city’s casino would remain closed and customers would have to remain seated in pubs, cafes and restaurants for four days.

Western Australia has been the most successful part of Australia in preventing the coronavirus spread and also imposes the toughest border restrictions on states that have experienced clusters.

Perth’s cases of community transmission last week were the first in Western Australia in more than a year.

HONG KONG — Hong Kong and Singapore said Monday they would launch an air travel bubble in May, months after an initial arrangement that would allow tourists to fly between both cities without having to serve quarantine was postponed.

Flights will begin from May 26. Visitors will not have to go through the quarantine as long as they fulfill the conditions of travelling within the air travel bubble.

Hong Kong and Singapore had previously announced the launch of an air travel bubble in November last year but shelved the plan days before it was to start after Hong Kong saw a surge in COVID-19 infections.

The air travel bubble comes as both Singapore and Hong Kong seek to boost tourism amid the pandemic, which has seen various countries close borders and declining air travel.

WASHINGTON — President Joe Biden says the U.S is determined to help India as it grapples with a surge in coronavirus cases.

In a tweet Sunday, Biden said, “Just as India sent assistance to the United States as our hospitals were strained early in the pandemic, we are determined to help India in its time of need.”

The president didn’t offer specifics in the brief message. But earlier Sunday the White House said the U.S. is “working around the clock” to immediately deploy to India drug treatments and rapid diagnostic COVID-19 testing kits. Also coming are ventilators and personal protective equipment, and the U.S. will seek to provide oxygen supplies as well.

The White House says it has identified sources of raw material urgently needed for India’s manufacture of the Covishield vaccine and will make that available. The U.S. also intends to pay for an expansion of manufacturing capability for the vaccine manufacturer in India, BioE, so it can ramp up and produce at least 1 billion doses of COVID-19 vaccines by the end of 2022.

JUNEAU, Alaska — Alaska Airlines has banned an Alaska state senator from its flights, saying she refused to follow mask requirements.

An airline spokesman says that state Sen. Lora Reinbold of Eagle River had been informed and that the suspension was effective immediately.

Reinbold told the Anchorage Daily News that she had not been notified of a ban and that she hoped to be on an Alaska Airlines flight in the near future.

Reinbold was recorded last week at Juneau International Airport apparently arguing with airport and Alaska Airlines staff about mask policies. Reinbold told the newspaper she was inquiring about a “mask exemption with uptight employees at the counter.” She said she was reasonable with all employees.

Alaska Airlines has banned over 500 people.

COLOMBO, Sri Lanka — Sri Lanka’s government on Sunday banned all private functions including meetings and parties and also halted all state functions for the next two weeks as COVID-19 cases are steadily rising.

“All state festivals planned for the next two weeks have been halted,” a statement from the President’s office said, adding that, “ the government had decided to ban all private sector functions, meetings and parties under quarantine regulations.”

The number of positive cases have gone up by three times in the last two days in Sri Lanka. For several weeks, the number of cases stood below 300 and on Sunday, the figure rose to 895.

How your star sign can determine your workout style