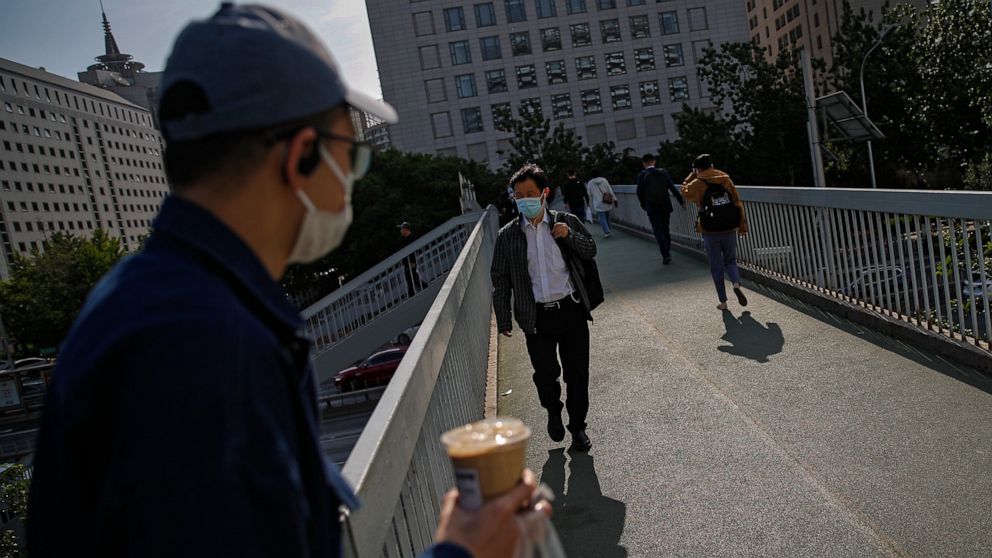 BERLIN — German pharmaceutical company BioNTech says it plans to create a state-of-the-art manufacturing site for its mRNA-based vaccines and other drugs in Singapore.

The company, which developed the first widely used coronavirus vaccine together with U.S. partner Pfizer, said Monday that it is also establishing a regional headquarters for Southeast Asia in the city-state.

BioNTech said the new manufacturing facility will boost the regional and global supply capacity of its products and ensure a rapid response to potential pandemic threats in the region.

The site, which could be operational by 2023, will have the capacity to produce “several hundred of million doses of mRNA-based vaccines depending on the specific vaccine,” the company said.

— In coastal Senegal, beginning of the fishing season renews hope for industry ravaged by COVID-19

— While wealthier nations stockpile vaccines, poorest countries yet to receive any, even for medical staff on front lines

TOKYO — Support for the government of Japanese Prime Minister Yoshihide Suga’s coronavirus measures fell to the lowest since he took office in September, according to a weekend poll by the Yomiuri, the country’s largest newspaper.

Only 23% of the respondents, down from 56% in October, said they support the administration’s pandemic policies. Nearly 70% of the 1,092 respondents disapproved of his virus measures.

The government on Friday announced an extension of a state of emergency period through May 31, while expanding the target regions from four to six. Japan confirmed over 7,000 new cases on Saturday, the highest since mid-January. Suga already has been criticized for acting too slowly to slow the infections, apparently because of his government’s reluctance to further damage the pandemic-hit economy.

The same poll found nearly two in three in Japan want to cancel the Tokyo Olympics, which is to start in 11 weeks. The extension of the state of emergency has caused the postponement of an expected mid-May visit to Japan by International Olympic Committee President Thomas Bach. Fuji News Network reported Monday, without citing sources, that the IOC and Japanese organizers are arranging a visit in June.

BEIJING — A Chinese pharmaceutical company and BioNTech SE, the co-developer of the Pfizer-BioNTech vaccine, are setting up a joint venture in China with the capacity to manufacture up to 1 billion doses of the shot to protect against COVID-19.

Shanghai Fosun Pharmaceutical Group Co. said in a stock filing on Sunday night that the companies will invest up to $100 million each to set up the venture.

The joint venture aims to supply shots for the Chinese population, but no timing was given on when the shots would be distributed.

China has based its vaccination campaign on domestically produced vaccines with a goal of vaccinating 560 million of the country’s 1.4 billion people by mid-June. Most of its vaccines require two doses, but China hasn’t broken down its vaccination figures by how many have received one or both doses.

COLOMBO, Sri Lanka — Sri Lanka authorities are converting garment factories and other buildings for facilities to treat COVID-19 patients amid fears existing hospitals may run out of capacity.

Military troops are completing the transformation of a garment factory in Seeduwa, on the outskirt of the capital Colombo, to create the island’s biggest COVID-19 hospital, with a capacity of 1,200 beds.

Another garment factory in Yakkala, about 40 kilometers from Colombo, is being converted to a treatment center with a 2,000-bed capacity.

Armed forces are acquiring buildings in all parts of the country and converting them to hospitals to increase capacity, said army commander Gen. Shavendra Silva, head of the country’s COVID-19 operations center.

Sri Lanka is experiencing a sharp surge in infections, reporting 2,000 new cases for the first time on Monday.

Sri Lanka has counted 125,905 coronavirus infections with 801 fatalities. Besides, 20,642 patients are being treated at hospitals and treatment centers.

PARIS — French President Emmanuel Macron welcomed the decision from the European Union not to renew its order for the AstraZeneca COVID-19 vaccine.

Macron said the EU policy is aiming at “responding in particular to the variants… We see that some other vaccines are more efficient.”

The bloc’s Internal Market Commissioner, Thierry Breton, said Sunday the EU Commission has not ordered AstraZeneca shots for after June. Two weeks ago, the EU launched legal proceedings against the pharmaceutical group for allegedly failing to respect the terms of its contract.

South Africa halted earlier this year the use of the AstraZeneca vaccine after preliminary data indicated it may be only minimally effective against the variant which is dominant in the country.

In France, the variant first identified in Britain has become largely dominant and the South African variant represents only a small percentage of the virus detected in the country.

Across the Channel, Britain has made the AstraZeneca vaccine the centerpiece of its successful vaccination campaign.

OnCrux Liquid Climbing Chalk Helps You Get a Grip