Vincent Ho, a clinical academic gastroenterologist and senior lecturer at Western Sydney University, unpacks the reasons for one of the most common gut health problems for The Conversation.

Your trousers fit when you put them on in the morning. But come mid-afternoon, they’re uncomfortably tight – and you didn’t even overdo it at lunchtime. Sound familiar?

Around one in six people without a health problem and three in four people with irritable bowel syndrome (IBS) report problems with bloating. In fact, for people with IBS and constipation, bloating is their most troublesome symptom.

Bloating is, of course, a feeling of increased abdominal pressure, usually related to gas. It may or may not be accompanied by visible enlargement of the waist (known as abdominal distension).

But contrary to popular belief, bloating and abdominal distention isn’t caused by an excessive production of gas in the intestines.

Gas in the upper gut can come from swallowed air, chemical reactions (from neutralising acids and alkali) triggered by food, and dissolved gas moving from the bloodstream into the gut.

Food products that are poorly absorbed in the small intestine can travel lower down to the large intestine where they’re fermented by bacteria. This process can produce carbon dioxide, hydrogen or methane gas.

Gas from the gut can come out through belching or passing wind, or by being absorbed into the blood or consumed by bacteria.

How much wind is normal?

Back in 1991, researchers in the UK tracked the farts of ten healthy volunteers. The volume of gas they expelled in a day varied from 214 mls (on a low-fibre diet) to 705 mls (on a high fibre diet).

The participants passed wind an average of 14 to 18 times per day, and it was comprised mainly of carbon dioxide and hydrogen.

In the fasting state, the healthy gastrointestinal tract contains around 100 mls of gas which is distributed almost equally among six segments of the gut: the stomach, small intestine, ascending colon, transverse colon, descending colon and lower (pelvic) colon.

After eating, the volume of gas in the gut can increase by about 65 percent and tends to be located around the pelvic colon.

As the stomach stretches and small bowel is stimulated, the passage of gas accelerates and you might feel the urge to fart.

But for people with a high-fat diet, fats inside the small bowel can delay this passage and make you retain the gas.

A 1975 study compared the amount of intestinal gas between people who reported being bloated and those who said they were not.

The researchers pumped (inert) gas through a tube directly into the participants’ intestines at a relatively high flow of 45 mls per minute. Then they recovered the gas via a plastic tube from their rectum.

The researchers found no difference in the levels of gas collected between the bloating and healthy subjects.

More recent research using abdominal CT scans has shown that people with bloating have similar volumes of intestinal gas as those who don’t feel bloated.

Likewise, although people with IBS experience more abdominal distention, they do not produce more intestinal gas than other people.

This leads us to believe the volume of gas in the gut itself isn’t the main mechanism for bloating.

When gas gets trapped

Most people tolerate intestinal gas really well because they can propel and evacuate gas very efficiently. As a result, only a relatively small amount of gas remains inside the gut at a given time.

In one study, researchers pumped just over 1.4 litres of gas in two hours into the mid-small bowel of healthy volunteers. This led to only a very small change in waist circumference: no more than 4mm.

On the other hand, people with abdominal conditions such as IBS or functional dyspepsia (indigestion), show impaired gas transit – in other words, the gas ends up being trapped in different parts of the bowel rather than moving along easily.

Studies show people with abdominal conditions tend to retain a relatively large proportion of gas pumped into the mid small bowel. They may even have notable increases in waist circumference without any gas being pumped in.

This impairment was confirmed in a study comparing 20 participants with IBS to a control group of 20 healthy participants. All received gas pumped directly into the mid-small bowel.

Some 90 percent of IBS participants retained the gas in their intestines compared to only 20 percent of control subjects. The researchers found abdominal distension was directly correlated with gas retention.

This can lead to intestinal gas retention and symptoms of bloating, abdominal pain and distension.

Despite feeling extremely bloated, some people have minimal or no distension of their stomach.

Research among people with IBS suggests this pain and discomfort may be due to a heightened sensitivity in the gut when a section of the abdomen stretches.

In fact, one study found those with bloating alone had more abdominal pain than those who had symptoms of bloating and abdominal distension.

If you’re sensitive to this stretching, are unable to move gas throughout your gut, and can’t get rid of it, you’re likely to have bloating and pain, whether or not there’s any visual sign.

This article is republished from The Conversation under a Creative Commons license. Read the original article. 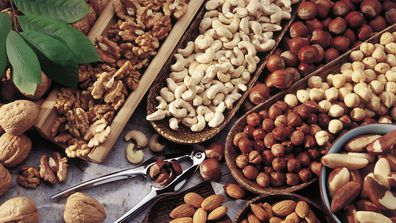 11 high-fibre foods you can eat every day

Most of California to reopen as vaccine eligibility expands

How to Make Grilled Surf and Turf Paella

Six diet tricks to get you through lockdown