The nutritionist who helped Prince Harry and Princess Eugenie get ‘wedding-ready’ has shared her go-to weight loss method — and helped explain the popular “4:3 fasting plan” along the way.

RELATED: ‘I tried intermittent fasting for two weeks, and here’s what happened’

The former model and author of 2 Weeks To Feeling Great told The Telegraph, “One of the great pluses of being a nutritionist is that I know exactly how to lose any weight I do gain – with my 4:3 fasting plan.”

RELATED: The best intermittent fasting diet is… whichever one you can stick to

On “fasting” days, the nutritionist recommended a calorie plan as low as 500 for women and 600 for men, while “healthy eating days” allowed participants to eat whatever they want, within a “reasonable” calorie budget.

“It’s not two weeks of misery, and it’s also very good for your metabolism,” Peacock explained, noting McDonald’s was permitted during the period, provided it wasn’t consumed frequently.

The nutritionist’s method follows a growing school of thought around the health benefits of “intermittent fasting“, with variations such as the “5:2 diet” or “time-restricted eating” all said to benefit fat loss and muscle development and improve insulin levels.

Sydney dietitian Jaime Rose Chambers, a champion of the “16:8” fasting diet — which involves fasting for 16 consecutive hours out of every 24 in the day — previously told 9Coach the method can provide “effortless weight loss”.

“It’s pretty well-established now that on some level fasting is really good for our health [but] the science is still fairly young,” she said.

RELATED: How to lose weight (instead of gain it) this winter

“There’s not really one right way of [fasting]… We’re all just so bogged down and bombarded and a bit paralysed about what to eat, and I want to keep it quite simple and basic.”

Dr Joanna McMillan clarified the method of fasting was not the same as “skipping meals”.

“A proper fast is carefully planned into your week — you’re eating less often, so you’re eating carefully in the meals you’re having [to ensure good nutrition],” she previously told 9Coach.

“The most common mistake that I see is, ‘I don’t eat breakfast so I’m already kind of fasting, but I have a milky coffee with a sugar every morning’ — that’s not actually fasting.”

Peacock told The Telegraph the method was a way to kick-start a post-pandemic health kick.

“Everyone wants a magical solution but that doesn’t exist, so the next best thing is a plan that works with your life, not against it, for as long as you need it,” she explained. 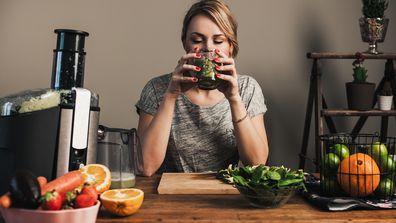 US moving to toughen testing requirement for travelers

Endometriosis: targeting a different type of pain may be key in improving treatment – new research

Why you should convince your boss to let you sleep in