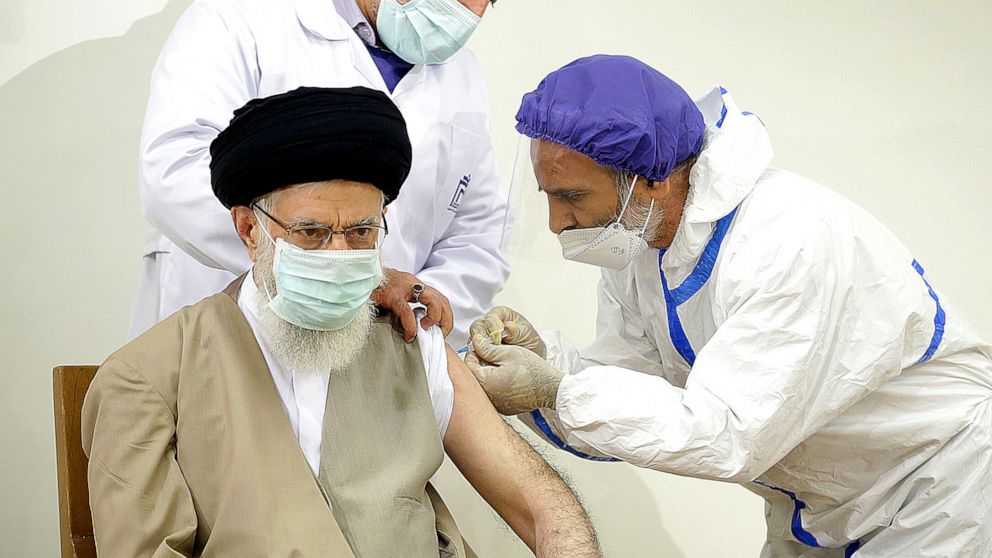 AMSTERDAM — The European Medicines Agency has approved a new manufacturing site for Johnson & Johnson’s COVID-19 vaccine, in a move that should boost production of the one-dose vaccine across the 27-nation EU.

In a statement Friday, the EU drug regulator said the new site in Anagni, Italy, will finish manufacturing of the J&J vaccine, which was licensed for use in adults across Europe in March. Production problems have stalled J&J’s roll-out across the European Union in recent months and millions of doses made at a U.S. factory had to be thrown out after contamination issues.

The EU has ordered 200 million doses of the J&J vaccine and was expecting 55 million by the end of June; to date, fewer than 14 million doses have been distributed.

J&J’s vaccine roll-out was also stalled after the EMA concluded there was a “possible link” between the coronavirus shot and very rare blood clots and recommended that a warning should be added to the label. Health officials say the vaccine’s benefits still far outweigh the risks.

— Japan vaccinates 1 million a day, but will it be enough as the Olympics approach?

— What should I know about the delta variant?

— “Scary” cluster blamed on the delta variant grows in Sydney

JERUSALEM — Israel, a world leader in vaccinations, is once again requiring people to wear masks in indoor public spaces amid a coronavirus outbreak driven by the arrival of a new variant.

Israel rolled out one of the most successful vaccination campaigns in the world, inoculating some 85% of its adult population. In recent months, nearly all restrictions were lifted as the number of active cases plummeted.

But there has been a spike in recent days after weeks in which the number of new daily cases was in the single or low double digits. Dr. Nachman Ash, who is leading the coronavirus response, said 227 new cases were confirmed on Thursday, according to Israeli media.

The outbreak appears to be driven by the arrival of the highly contagious delta variant, which spreads rapidly among unvaccinated individuals, including children. Vaccinated Israelis have reportedly been infected, but generally appear to have only minor symptoms.

Earlier this week, the government postponed the planned reopening of the country to vaccinated tourists until the beginning of August. It was originally set for July 1, and vaccinated tour groups have been permitted since May.

Israel has reported 6,429 deaths since the start of the pandemic, in a population of 9.3 million.

BERLIN — Germany’s health minister has lamented that European Union countries haven’t been able to agree a single set of rules for travelers from regions with high rates of coronavirus variant cases.

Chancellor Angela Merkel had raised the issue at a summit of EU leaders in Brussels on Thursday. Germany requires people arriving from so-called ‘virus variant’ areas such as Britain to quarantine for 14 days, even if they are fully vaccinated; other EU countries have shorter or no quarantine periods for vaccinated people.

Health Minister Jens Spahn told reporters in Berlin on Friday that he regretted better coordination among the bloc’s 27 members hadn’t been possible.

“It would have been better to find uniform rules for this,” he said. “If not, we will have to keep making our own to protect ourselves.”

German officials say the more contagious delta variant of the virus now makes up at least 15% of cases in the country. In Britain, it has already become the dominant variant.

Lothar Wieler, the head of Germany’s disease control agency, said he expects the delta variant to eventually dominate in Germany, too, and urged people to get vaccinated as soon as possible.

Scientists say vaccines authorized for use in the European Union provide good protection against serious illness, including from the delta variant, but it is not yet clear how great the risk is that immunized people can still transmit the virus.

HONOLULU — Hawaii is dropping its testing and quarantine rules for vaccinated domestic travelers in two weeks.

The governor says he expects the state will reach a 60% vaccination rate among all residents by that time. Ige had previously set a 60% rate as a milestone for allowing more so-called vaccine passports.

Restaurants will also be able to seat up to 75% of their capacity.

People will still be required to wear a mask when gathering indoors. Masks are not required outdoors.

SEATTLE — A Nigerian information technology worker has been indicted on federal wire fraud and identity theft charges after authorities said he and his co-conspirators filed false claims for pandemic-related unemployment benefits in 17 states.

According to an indictment unsealed Thursday in Seattle, Chukwuemeka Onyegbula was linked to at least 253 fraudulent filings for unemployment benefits.

Onyegbula has been detained in Nigeria, but prospects for his extradition to the U.S. were unclear.

WASHINGTON — The White House says it will provide Afghanistan with 3 million doses of Johnson & Johnson’s COVID-19 vaccine to help with a coronavirus outbreak fueled by the delta variant.

White House spokesperson Karine Jean-Pierre made the announcement aboard Air Force One on Thursday as President Joe Biden flew to Raleigh, North Carolina, to encourage Americans to get vaccinated. The announcement also came a day before Biden meets with Afghanistan’s leaders at the White House on Friday.

Jean-Pierre says the Johnson & Johnson vaccines — only one shot is required — could be shipped as soon as next week.

The U.S. is also providing oxygen and other supplies to Afghanistan.

The 3 million doses are part of an overall donation of 55 million doses to the world that the White House announced earlier this week.

The new law protects businesses and other groups as long as they follow guidelines to protect people from the virus. Dozens of other states have passed similar measures.

McMaster again said his decision to resist closing restaurants and other businesses as long as he could and allow them to reopen more quickly meant South Carolina suffered fewer economic problems.

The May unemployment rate in the state was 4.6%, down from the pandemic high of 11.5% in May 2020 and well below the national rate of 5.8% in May 2021, according to the South Carolina Department of Employment and Workforce.

COVID-19 has killed more than 9,800 people in South Carolina since March 2020. Only about 37% of the population has been fully vaccinated against the disease.

After the bill signing, McMaster said he wasn’t worried about the low vaccine rates or new COVID-19 variants that have caused increased case counts and hospitalizations in other states.

HAGATNA, Guam — Guam could be lifting more travel restrictions as its vaccination rate approaches 75% of the adult population.

Guam Gov. Lou Leon Guerrero has been advised by her Physicians’ Advisory Group to consider lifting the U.S. territory’s travel restrictions once 75% of the adult population has been fully vaccinated, the Pacific Daily News reported Thursday.

Guam has already lifted travel quarantine and testing rules for fully vaccinated people. Everyone else must be tested within three days of their arrival to avoid quarantine.

Currently, 72% of Guam’s adult population is fully vaccinated, officials report. The islands could be just days away from 75%, the newspaper reported.

“My vision for Guam after July 21 is to get back to normal,” the governor said, adding that she would still encourage masks but plans to drop occupancy limits and social gathering restrictions.

BUCHAREST, Romania — Romania’s national vaccination committee chief announced tens of thousands of doses of AstraZeneca vaccine are set to expire and will likely have to be destroyed.

“On June 30, 35,000 AstraZeneca vaccine doses expire. We probably won’t be able to use them. They will enter the destruction procedure,” Valeriu Gheorghita said in a press conference Thursday.

AstraZeneca is one of four authorized vaccines currently being administered in Romania but has faced a low uptake in the country of more than 19 million, where around just 23% of the population have been fully inoculated against COVID-19.

In recent weeks, daily vaccinations have sharply dropped. In mid-May, around 100,000 vaccines were being administered a day, compared to around just 25,000 a day over the last week.

Since the pandemic began, more than a million COVID-19 infections have been confirmed in Romania, and nearly 33,000 have died.

LONDON — Britain on Thursday added 17 countries and territories, including Malta, the Balearic Islands and Madeira, to its “green” list of safe travel destinations amid pressure from airlines and travel companies to relax COVID-19 restrictions.

The additions mean that people traveling to those destinations will no longer have to self-isolate for 10 days when they return to the U.K.

The government also announced its intention to relax current rules and allow travelers who have been fully vaccinated to visit “amber” list countries without having to self-isolate on their return to Britain.

The Department for Transport said it expects to implement this policy in phases later in the summer. The amber list currently includes the U.S. and most of the European Union.

SAN FRANCISCO — San Francisco city workers will be required to be vaccinated against the coronavirus when a vaccine receives full federal approval.

The policy covering 35,000 municipal workers may be the first by any city or county in the U.S., the San Francisco Chronicle reported Wednesday.

Employees who refuse to get vaccinated and don’t get a medical or religious exemption could be fired.

The three COVID-19 vaccines currently available in the U.S. are being dispensed under emergency authorization by the Food and Drug Administration.

They are expected to receive full approval in several months and San Francisco city employees will then have 10 weeks to get their shots.

San Francisco, a compact city of nearly 900,000 residents, has had some of the strictest pandemic-related restrictions in the country and its vaccination rates are very high.

The vaccination policy for city employees covers a wide range of jobs but it does not include teachers, who are school district employees.

The ultimate hangover survival guide: What to eat and drink to feel better ASAP

How to take control of mindless snacking in lockdown

The 15 Best Men’s Sandals and Flip-Flops for Summer