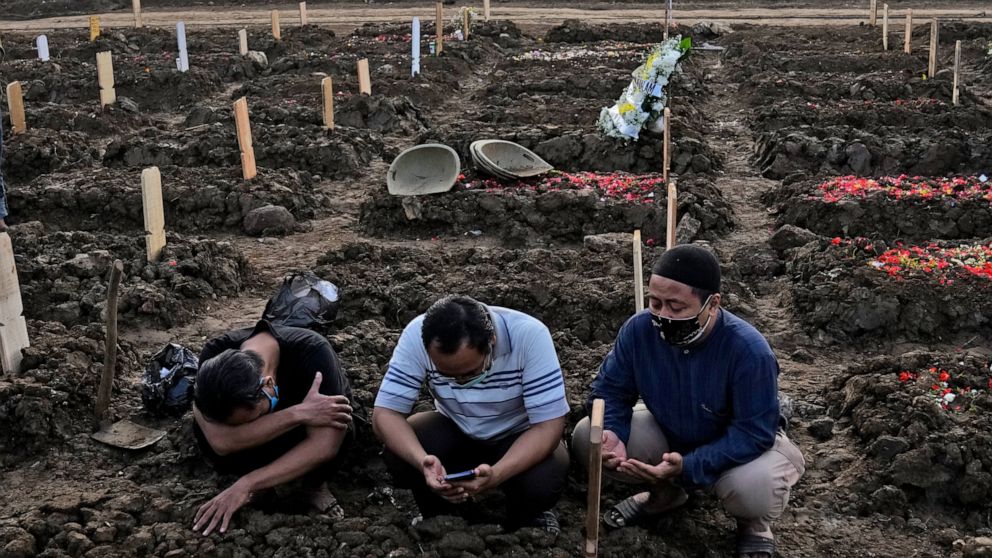 JAKARTA, Indonesia — Sri Dewi stood in the graveyard with her family, waiting their turn to bury her brother. He suffered a stroke and needed oxygen, but there wasn’t any in a hospital overwhelmed with COVID-19 patients.

“We took him to this hospital, but there was no room for him,” said Dewi. “The hospital was out of oxygen.”

The family finally bought an oxygen tank at a shop and brought the brother home, but he died later that evening.

After a slow vaccination rollout, Indonesia is now racing to inoculate as many people as possible as it battles an explosion of COVID-19 cases that have strained its health care. But inadequate global supply, the complicated geography of the world’s largest archipelago nation, and hesitancy among some Indonesians stand as major roadblocks.

Fueled by travel in May during the Islamic holiday of Eid al-Fitr, and the spread of the delta variant of the coronavirus first found in India, the most recent spike has pushed some hospitals to the limits. Over the past two weeks, the seven-day rolling average of daily cases rose from over 8,655 to 20,690. Nearly half of those who are PCR tested return positive results.

Even those numbers are an undercount, with almost 75% of provinces reporting a testing rate below the recommended benchmark of 1 test per 1,000 people, according to the World Health Organization.

The impact is obvious across Java, Indonesia’s most populated island. In mid-June, hospitals began to erect plastic tents to serve as makeshift intensive care units, and patients waited for days before being admitted. Oxygen tanks were rolled out on the sidewalk for those lucky enough to receive them, while others were told they would need to find their own supply.

Away from the hospitals, new land continues to be cleared for the dead. Families wait turns to bury their loved ones as gravediggers work late shifts. Last year, Indonesia’s highest Islamic clerical body issued a decree that mass graves — normally forbidden in Islam — would be permitted during the pandemic crisis.

While the surge has largely been concentrated on Java, it’s a matter of time before it hits other parts of the sprawling archipelago, where the underfunded and understaffed health facilities are even more fragile and could collapse, said Dicky Budiman, an epidemiologist at Griffith University in Australia.

The government has been resisting imposing tougher COVID-19 restrictions for fear of hurting the economy, Southeast Asia’s largest, which last year recorded its first recession since 1998. This week the government announced its strictest measures of 2021 starting Saturday, including work from home, the closure of places of worship and malls as well as limiting restaurants to delivery only.

“We have agreed with the governors, mayors, to strictly enforce this emergency measures,” said Luhut Binsar Pandjaitan, who has been appointed to lead the pandemic response.

Some health experts doubt the measures will be enough, given the overall lax enforcement.

Without the willingness to enter a full lockdown, Indonesia’s only way out is the vaccines.

Like many other countries, Indonesia has fallen short of the shots it needs. By June 30, it had received 118.7 million doses of the Sinovac and AstraZeneca vaccines — far short of the amount needed to vaccinate 181.5 million people, or 70% of the population. Millions of additional doses are scheduled to arrive in the coming months, but will still not be enough to reach the target.

Indonesia is also working on developing its own vaccine, but even if it passes clinical trials, it isn’t expected to hit production until next year.

President Joko Widodo has set a goal of vaccinating 1 million people a day, turning stadiums, community centers, police stations and neighborhood clinics into mass vaccination sites. The government aims to double the daily rate starting in August. So far, only about 5% of the population have been vaccinated.

Siti Nadia Tarmizi, a spokesperson for Indonesia’s vaccination program, said that the regions with more cases will be a priority.

Geography poses massive challenges in a country whose thousands of islands stretch across an area about as wide as the continental United States, and transportation and infrastructure are limited in many places.

Government officials have said there are preparations in place such as training staff and working to secure a stable cold supply chain that’s required for transporting vaccines.

Hesitancy and misinformation has hampered previous vaccination campaigns. Indonesia has had vaccination rates as low as 10% for routine shots for measles and rubella.

He said the government needs to make “good and strong decisions based on science . … or I fear we will find ourselves in a similar situation to what happened in India.”

The Associated Press Health and Science Department receives support from the Howard Hughes Medical Institute’s Department of Science Education. The AP is solely responsible for all content.

Moto3 rider tragically passes away after horror crashDupasquier was involved in a horrible crash...

It’s not just exercise. Black fitness stars use their platforms to celebrate and educate....

With more girls pregnant, Zimbabwe pushes a return to school

Australia cries foul as Opals robbed in Olympic ’travesty’Sport can be so cruel.