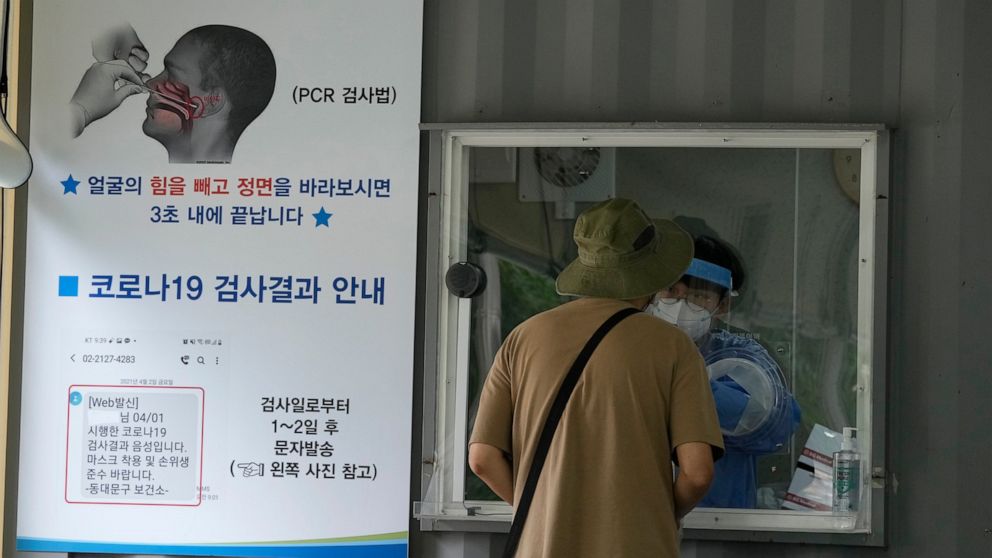 DHAKA, Bangladesh — Bangladesh has reported 11,525 positive cases, the highest in a day since the start of the coronavirus pandemic.

Another 163 people died in the last 24 hours, raising the total number to 15,392, according to the government. Bangladesh’s cases of new infections increased last month when the delta variant — first discovered in India — hit the country’s border regions in the northern and southwestern Bangladesh.

Bangladesh shares a large border with India and health experts say the actual number of both infections and deaths is likely higher. The country is facing a crisis in vaccination after India stopped exports of AstraZeneca shots because of its own outbreak in April. Bangladesh has a deal to get 30 million doses from India’s Serum Institute.

Only 4 million Bangladeshis have been vaccinated in a country of 160 million people. Authorities are hoping to start a new mass vaccination campaign with China’s Sinopharm and other vaccines.

LONDON — The British government is scrapping coronavirus rules for schools that have seen hundreds of thousands of pupils sent home to self-isolate.

Education Secretary Gavin Williamson says starting July 19, schools will no longer group children in class or year-group “bubbles,” with all members of the group sent home if one person tests positive for the coronavirus.

With infections climbing in the U.K., the system has led to major disruption for schools and families. On July 1, 471,000 children in England were self-isolating because of potential contact with a virus case at school.

Williamson says in mid-August, close contacts of children who test positive will no longer have to self-isolate. He said the government plans to lift social distancing rules and other educational restrictions for the start of the new school year in September. However, “some protective measures — including enhanced hygiene and ventilation — will remain in place.”

The government plans to remove mandatory mask requirements and other restrictions across society on July 19, the date by which all adults are expected to have had at least one dose of a coronavirus vaccine. The U.K. has not yet decided whether to vaccinate children and teens under 18.

LONDON — Britain’s government says it is scrapping rules for self-isolation for those who are fully vaccinated starting mid-August, as the country prepares to lift most remaining coronavirus restrictions.

Currently, people who are notified they’ve come into close contact with someone who tested positive must enter self-isolation for 10 days. Health Secretary Sajid Javid says this rule no longer applies starting Aug. 16 to anyone who has received both doses of the COVID-19 vaccine.

Young people under 18 years old will no longer need to isolate unless they test positive — a change that will come as a big relief for families with school children who have had to repeatedly isolate and miss school because of reported cases in their classes.

Javid says those who have come into close contact with an infected person will instead be advised to take a test as soon as possible. Officials are looking into removing the need for isolation after travelling abroad for fully vaccinated people, he added.

“Step by step, jab by jab, we’re replacing the temporary protection of restrictions with the long-term protection of vaccines,” he said.

JAKARTA, Indonesia — In Myanmar, the military has declared war on health care workers.

Medics were early and fierce opponents of the military’s takeover of the nation’s government in February. Security forces are arresting, attacking and killing medical workers and have dubbed them enemies of the state.

Medics have been driven underground amid a global coronavirus pandemic and the country’s already fragile health care system is crumbling. Myanmar is now one of the most dangerous places on earth for health care workers, with 240 attacks this year. That’s nearly half of the 508 globally tracked by the World Health Organization and by far the highest of any country.

The military has issued arrest warrants for 400 doctors and 180 nurses, with photos of their faces plastered over state media like “Wanted” posters. They are charged with supporting and taking part in the “civil disobedience” movement.

Since the military’s takeover of the nation of 54 million, security forces have killed at least 890 people and 5,100 people are in detention.

BEIJING — A Chinese city bordering Myanmar is stepping up efforts to fight a third coronavirus outbreak after several locally transmitted cases were reported this week.

Ruili, located in the southwestern province of Yunnan, has initiated mass testing and imposed a lockdown to prevent people from entering or leaving the city unless they can prove their travel is necessary, according to the local government.

More than 230,000 test samples have been collected since Monday, and the Jiegao border community was named a medium-risk area on Tuesday, the official Xinhua News Agency reported.

The large number of exchanges along the border at Ruili and Myanmar’s difficulties in handling the pandemic have made it particularly difficult to control new transmissions. Strict anti-pandemic measures have largely prevented local cases in other parts of China over recent months, leaving the country’s death toll from the pandemic static at 4,636 among almost 92,000 reported cases, according to official statistics.

MOSCOW — Coronavirus deaths in Russia have hit another daily record, with authorities reporting 737 more fatalities amid a rapid rise in infections.

Russia’s coronavirus task force on Tuesday reported 23,378 new coronavirus cases. The daily tally of confirmed infections has more than doubled in the past month, soaring from around 9,000 in early June to over 23,000 this week.

Despite the surge, the Kremlin has said there are no plans to impose another lockdown. Russia had one nationwide lockdown in the spring of 2020 that lasted six weeks, and the government has since resisted shutting down businesses.

The coronavirus task force has reported over 5.6 million confirmed coronavirus cases and a total of 139,316 deaths in the pandemic. The actual mortality rate is believed to be higher.

JERUSALEM — Israel is sending 700,000 coronavirus vaccine doses to South Korea in exchange for a future shipment of vaccines from South Korea to Israel.

Under the deal, Israel will transfer the Pfizer vaccines to South Korea in an effort to inoculate more of the Asian nation’s citizens this month. South Korea will send the same number of doses to Israel as early as September, the officials added.

“This is a win-win deal,” Israel Prime Minister Naftali Bennett said in his statement.

Both countries are reporting a surge in new infections. South Korea topped 700 new confirmed cases of COVID-19 for the fourth straight day on Tuesday. Israel was seeing the most new infections in three months, with the delta variant driving the trend, the government says.

TOKYO — The pressure of hosting an Olympics during a still-active pandemic is beginning to show in Japan.

The Tokyo games begin July 23, with organizers determined they will go on, even with a reduced number of spectators or possibly none at all. While Japan has made remarkable progress to vaccinate its population against COVID-19, the drive is losing steam because of supply shortages.

With tens of thousands of visitors coming to a country that is only 13.8% fully vaccinated, gaps in border controls have emerged, highlighted by the discovery of infections among the newly arrived team from Uganda, with positive tests for the highly contagious delta variant.

As cases grow in Tokyo, so have fears that the games will spread the virus.

“We must stay on high alert,” Prime Minister Yoshihide Suga told reporters on July 1. Noting the rising caseloads, he said “having no spectators is a possibility.”

Organizers, the International Olympic Committee and others are expected to meet this week to announce new restrictions because of the fast-changing coronavirus situation.

ISLAMABAD– Pakistan’s interior ministry says the country is immediately closing a key border crossing into Afghanistan to contain the spread of the coronavirus.

Interior Minister Sheikh Rashid Ahmed announced on Twitter that the Torkham border will be closed for all types of movement of people until further guidance from the country’s National Command and Operations Center, which oversee Pakistan’s response to coronavirus.

Pakistan’s top health official reported Monday an uptick in new COVID-19 cases and the country’s positivity rate for the coronavirus over the previous seven days.

Pakistan has reported 964,490 confirmed cases among 22,452 death from coronavirus since last year.

SYDNEY — New South Wales officials plan to announce on Wednesday whether Sydney’s two-week lockdown will be extended beyond Friday.

New South Wales state Premier Gladys Berejiklian flagged the pending decision while reporting 18 new locally acquired COVID-19 infections in Sydney in the latest 24-hour period. She said the decision would be made on health advice.

Last week, almost half Australia’s population was locked down with cities on the east, west and north coast tightening pandemic restrictions due to clusters of mostly the delta variant, which is thought to be more contagious.

But Sydney, Australia’s largest city, has had the biggest number of infections and will be the last to emerge from lockdown.

Melbourne, Australia’s second-largest city which has accounted for most of Australia’s 910 COVID-19 deaths, on Tuesday reported its sixth day without a single locally-acquired case.

LONDON — An outbreak of the coronavirus in England’s one-day international squad forced it into isolation on Tuesday.

Tests on Monday, a day after the team’s last ODI against Sri Lanka in Bristol, revealed seven infections among three players and four staff. None were named.

The squad has gone into isolation dating from Sunday, the England and Wales Cricket Board said in a statement.

The six-match limited-overs series against Pakistan, starting on Wednesday with the first ODI in Cardiff, was still going ahead.

England planned to name a new squad on Tuesday to be captained by Ben Stokes.

“We have been mindful that the emergence of the delta variant, along with our move away from the stringent enforcement of bio-secure environments, could increase the chances of an outbreak,” ECB chief executive Tom Harrison said. “We made a strategic choice to try to adapt protocols, in order to support the overall wellbeing of our players and management staff who have spent much of the last 14 months living in very restricted conditions.”

BERLIN — Germany is easing strict rules on travel from Britain, Portugal and some other countries that were imposed because of the rise of the more contagious delta variant of the coronavirus.

The U.K. had been in the top risk category since May 23, and was joined last Tuesday by Russia and Portugal, one of Germany’s partners in the European Union.

Airlines and others are restricted largely to transporting German citizens and residents from “virus variant areas,” and those who arrive must spend 14 days in quarantine at home.

Willpower is overrated: Why you don’t need it to get healthy

An easy way to adopt a plant-based diet

‘Shocking’ scenes as US ‘embarrassed’The US trying to work out where it all went...