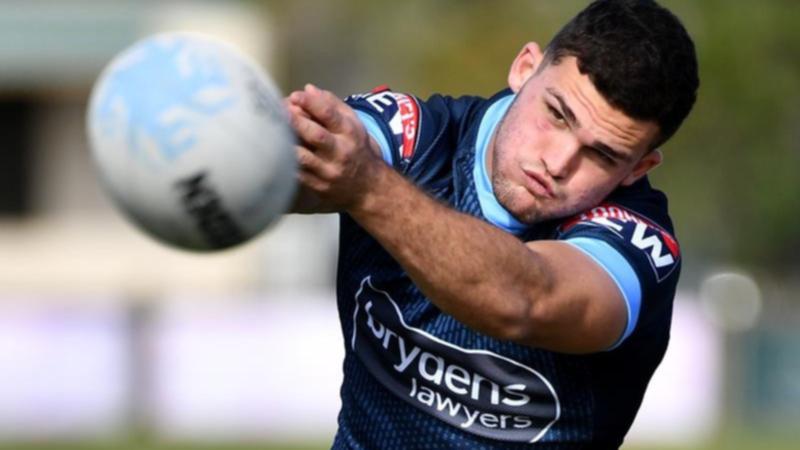 Jarome Luai is hopeful Nathan Cleary will make his return from a shoulder injury on Saturday night with the Penrith halfback to be tested in a heavy training session on Thursday.

The NSW star has been sidelined for just over five weeks with a shoulder injury he sustained in Origin II but put off season-ending surgery with hopes he could return for the Panthers.

The 23-year-old has been named on an extended bench to face Sydney Roosters on Saturday night in a sign he’s nearing fitness.

And if he gets through Thursday’s session, Luai is confident he will have his halves partner back.

“Nath is looking good. He’s ticking a lot of boxes and he’s obviously in the squad as well. It’s one of our big days tomorrow at training as well so hopefully, he gets through that and we’ll find out soon,” Luai said on Wednesday.

“He’s been in a lot of drills.

“It’d be a massive boost for us.

“Anyone who watches us knows Nath is a big piece of our puzzle. The last couple of games we’ve played without him we’ve missed him a lot.”

Tevita Pangai Junior will suit up for the Panthers for the first time on Saturday after joining the club in a mid-season switch from Brisbane.

The 25-year-old hasn’t played since round 15 through suspension so expects to be eased into the game against the Roosters with short shifts from the bench.

His short-term deal with Penrith comes after he signed with Canterbury for next season, giving him precious little time to contribute to his new club.

“It’s just awesome joining a winning team, it rubs off on you,” he said.

Coach Ivan Cleary has previously said he thinks Penrith’s culture can get the best out of the controversial forward in a matter of weeks.

Pangai Junior hopes so too.

“I’ve come here to work with certain players and certain coaches … just to work on my defence and get all those little things right, all those little habits right and that will take me to the next level,” he said.

“The way they train here, they’re really big on the one-percenters and on the defence so that’s what I’m trying to add into my game.”

These are the foods you need to introduce into your diet now to kickstart...