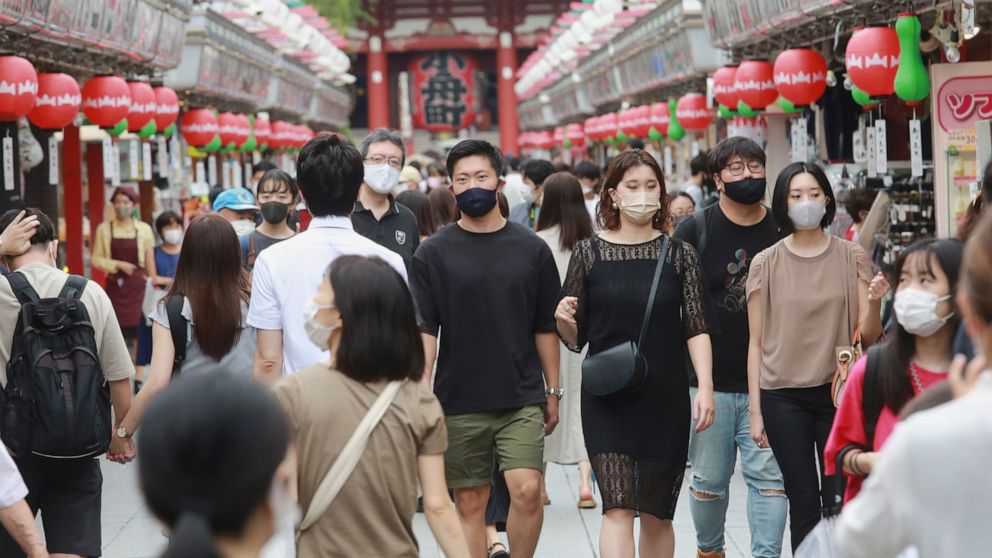 NEW YORK — U.S. health officials have acknowledged more than 1 million Americans got extra coronavirus vaccine doses before it was authorized for people with weakened immune systems.

About 1.1 million people who received the two-dose Moderna and Pfizer vaccines got at least one additional dose on their own. About 90,000 people who got the single-shot Johnson & Johnson vaccine received at least one more, the Centers for Disease Control and Prevention said Friday.

It’s not known how many of the people who got extra doses are immune-compromised. The Food and Drug Administration this week authorized an extra dose of the Pfizer or Moderna vaccines in people with weakened immune systems to better protect them from the virus.

— Moscow reports surge in deaths from coronavirus in July

— Japan races to vaccinate after Olympics as coronavirus surges

LITTLE ROCK, Ark. — Most Arkansas public school students will be required to wear masks when classes begin statewide next week.

The requirements will cover at least half of the state’s 473,000 public school students.

Gov. Asa Hutchinson didn’t issue a statewide mask requirement after the judge’s ruling and instead left the decision to local school boards. The state’s 10 largest districts have all approved some type of mandate.

The pace at which the mandates are being approved surprises even health experts, who say they’re needed to prevent the spread of the coronavirus as Arkansas’ cases and hospitalizations skyrocket.

OKLAHOMA CITY — The Oklahoma City school district will require students and staff to wear masks starting next week, with provisions for an opt out of the requirement, the district’s superintendent announced Friday.

Also, school employees who provide proof of full vaccination by Nov. 15 will receive a $1,000 stipend, according to Superintendent Sean McDaniel.

McDaniel says he issued the requirement days after the start of school on Monday because the number of virus cases increased from four the first day of classes to 119 on Thursday. McDaniel adds he doesn’t believe the requirement violates a state law banning mask mandates in schools because he, not the school board, issued the directive.

O’FALLON, Mo. — Missouri hospitals are filling to capacity with COVID-19 patients, along with the intensive care units with a record number of patients.

The state health department’s coronavirus dashboard shows 2,318 people hospitalized with the virus, 50 more than Thursday and the highest number in seven months.

Some 689 COVID-19 patients are in Missouri intensive care units, the most since the pandemic began, topping 685 ICU patients on Dec. 23. The state data indicates 384 people on ventilators.

TORONTO — The Canadian government will require all air travelers and passengers on interprovincial trains to be vaccinated against COVID-19.

Transport Minister Omar Alghabra says that includes all commercial air travelers, passengers on trains between provinces and cruise ship passengers. It’s expected to take effect sometime in the fall and no later than the end of October.

The government also will require vaccinations for all federal public servants in the country.

The Minister of Intergovernmental Affairs Dominic Leblanc noted the federal government is the largest employer in the country. Leblanc says it is the government’s duty to guarantee the safety of their employees and those they serve.

MOSCOW — Russia has reported a daily record of 815 COVID-19 deaths, the highest toll of the pandemic.

Meanwhile, Moscow’s Health Department says deaths of all causes in the capital increased 60% in July compared to the same month a year earlier. They included 6,583 coronavirus-related deaths, which corresponds to a COVID-19 mortality rate of 3.95%.

Health officials blamed the increase on COVID-19 deaths on the more contagious delta variant and unusually hot weather that exacerbated coronavirus-induced complications. Russia’s vaccination drive has lagged other nations. As of a week ago, 20% of the population was fully vaccinated.

CHICAGO — Chicago Public Schools officials announced they’ll require all employees to be fully vaccinated against COVID-19 by mid-October unless they qualify for a medical or religious exemption.

The mandate — announced two weeks before the full-time in-person learning begins Aug. 30 — applies to all Chicago Board of Education workers, a group that includes teachers, staff, workers in the district’s central office, and regular vendors and network employees.

“Our Chicago Public School communities deserve a safe and healthy environment that will allow our students to reach their greatest potential,” Mayor Lori Lightfoot said in a statement. Gov. Gavin Newsom announced Wednesday that California would become the first state to require all teachers and school staff to get vaccinated or undergo weekly COVID-19 testing.

CPS says staffers must submit proof that they are fully vaccinated by Oct. 15, unless they have the approved exemptions. In the meantime, employees who have not reported they’re fully vaccinated will be tested at least once a week until Oct 15 or until they provide proof of vaccinations. Those employees who have approved exemptions must be tested throughout the school year.

PHOENIX — Arizona reported more than 3,000 additional virus cases for the first time in six months amid an escalation of legal wrangling over school districts’ mask-wearing restrictions.

The state’s seven-day rolling average of daily cases rose in the past two weeks from 1,507 on July 28 to 2,547 on Wednesday, according to Johns Hopkins University data.

A judge was scheduled Friday to hear arguments in a lawsuit challenging an Arizona school district’s decision to require students and staff to wear masks indoors.

With nine other districts adopting similar mask rules despite a state law prohibiting districts from requiring mask-wearing, the case against Phoenix Union is seen as a test case. Also, the Arizona School Boards Association and others have filed a lawsuit challenging the constitutionality of that law.

WASHINGTON — The Federal Emergency Management Agency is reporting a grim milestone in its program to provide funeral assistance payments for people who have died from COVID-19.

The government provides a maximum of $9,000 per deceased individual and up to $35,000 per application for U.S. citizens who can provide proof their family member died of COVID-19 and had qualified expenses not covered by some other source.

Redding says the U.S. government has no projected end date for the funeral assistance. “FEMA has sufficient resources to continue this mission as the nation continues to grapple with so much loss,” he said.

In some cases, there’s been assistance for multiple family members since the program launched nearly three months ago. FEMA has provided funeral assistance in the past but never on this scale.

More than 619,000 people have died in the U.S. from COVID-19, according to Johns Hopkins University.

DeSantis says parents should decide whether their children wear masks in classrooms. But with infections from the delta variant surging, some school districts are following guidance from the U.S. Centers for Disease Control and Prevention that recommends staff and students wear masks. The lawsuit says the mask ban violates Florida’s constitution.

In Palm Beach County, officials said they ended the second day of classes with 440 students sent home to quarantine because of 51 cases detected among staff members and students.

LAS VEGAS — A coronavirus pandemic mask mandate in Nevada has drawn a federal lawsuit from attorneys seeking class-action status for claims that the constitutional rights of thousands of parents and children at Las Vegas-area schools are being violated.

It seeks an immediate court order to invalidate a directive the governor enacted last week requiring K-12 students and school employees in the Las Vegas and Reno areas to wear masks on buses and inside school buildings, regardless of vaccination status. The CDC says masks help prevent the spread of the deadly coronavirus.

Schools opened Monday in and around Las Vegas, where more than 300,000 students and about 18,000 teachers make the Clark County district the fifth largest in the nation.

TOKYO — The Tokyo Olympics have ended, but cases are still rising amid calls to limit gatherings.

On Friday, Tokyo reported 5,773 new cases, surpassing the previous record of 5,042 set last week. Yet many people are ignoring government requests to avoid travel and are gathering at bars and restaurants even as the coronavirus spikes.

Prime Minister Yoshihide Suga hopes vaccinations will slow the infections. It’s a race between the fast-spreading delta variant of the virus and inoculation rates that are making better progress than expected.

Japan’s daily coronavirus cases have topped 10,000 for more than a week, hospitals are filling up, and thousands of people infected are isolating at home. About 36% of Japan’s population has been fully vaccinated.

BELIZE CITY — The Belize Tourism Board says 27 people aboard a Carnival cruise tested positive for the coronavirus just before the ship made a stop in Belize City.

The positive cases it reported Wednesday were among 26 crew members and one passenger on the Carnival Vista, which is carrying over 1,400 crew and nearly 3,000 passengers. All 27 were vaccinated, have mild or no symptoms, and are in isolation.

The Washington Post reports Carnival says it announced last week there were positive cases on board, but the cruise line had not given specific numbers. The U.S. Centers for Disease Control and Prevention says on its website that it has investigated the ship and it remains under observation.

NICOSIA, Cyprus — Lekulutu Nsima said he’s a “lucky man” after receiving his first Pfizer vaccine shot against COVID-19. The 33-year-old asylum seeker says in his native Democratic Republic of Congo, the government only procured a handful of vaccine doses for one of Africa’s most populous nations, and those are often reserved for the country’s elites.

Nsima was one of hundreds of other foreign nationals who stood in line on Friday under Cyprus’ searing mid-summer sun at the capital’s walk-in vaccination center geared toward vaccinating free of charge and without an appointment those who aren’t covered under the country’s national health program.

On the center’s first day a week ago, 2,555 people received a shot. More than 1,000 were in line to be vaccinated on Friday.

The Cypriot government requires the mandatory display of a ‘SafePass’ certificate for entry into places where people gather in numbers, including restaurants, bars, shopping malls and supermarkets. The certificate proves the holder has received at least once shot, been tested for the virus in the previous 72 hours or has recently recovered from the disease.

Official figures indicate nearly 70% of Cyprus’ adult population have been fully vaccinated, while 76.3% have received at least their first shot.

JERUSALEM — Israel is expanding its coronavirus booster shot program to people over age 50.

Israel was one of the world’s leaders in vaccinating its population early this year. But in recent weeks, it has seen a surge in cases involving the more transmissible delta variant, even among individuals who were thought to be fully vaccinated.

Israel last month began offering a booster shot to people over 60, becoming the first country in the world that uses a Western vaccine to do so. The campaign was expanded on Friday to people over 50 and front-line health care workers.

Health officials in the United States and Europe have not yet recommended booster shots.

World Health Organization officials have urged nations to refrain from administering extra shots, saying it is more important to inoculate the unvaccinated in poorer countries.

Diet vs. exercise: Which one should you focus on to lose weight?

China hosts Southeast Asian ministers as it competes with US

Aussie superstar ‘Player of the Decade’Perry can do it all.