If you’re a woman in your late 40s or early 50s chances are you will be familiar with the term ‘perimenopause’.

Used to describe the period up to 10 years before menopause itself, ‘peri’ is the latest buzz word in any discussion of the hormonal shifts and physical changes women commonly experience during this time. Presenting with a range of signs and symptoms including poor sleep, energy fluctuations, mood swings and weight gain, while perimenopause is not new, what is more common nowadays is actively seeking out ways to make these hormonal shifts easier to manage.

RELATED: Thinking of menopausal hormone therapy? Here’s what you can expect from your GP

When we take a closer look at what is happening physiologically in the bodies of women throughout this time in their lives, indeed there is plenty that can be done nutritionally to not only help halt unwanted weight gain, but to also bring some relief to the symptoms being experienced.

One of the most important changes to be aware of in your body at this time is the declining levels of oestrogen. While the primary role of oestrogen is to regulate the menstrual cycle, reduced amounts of oestrogen in the body have profound effects on metabolism and are closely associated with weight gain. Specifically, oestrogen plays a key role in helping to regulate body weight and prevent central fat deposition. This partially explains why post-menopausal women tend to carry extra body fat around their stomach, or start to store body fat in places on their body they never previously did. Whilst declining oestrogen is normal, working to actively prevent the weight gain associated with this is crucial if you are in peri-menopause. Here, reducing calorie and carbohydrate intake slightly, plus committing to resistance training at least twice each week will help to buffer the impact of declining oestrogen levels and help keep you in control of your weight.

Dietary research too suggests that diet may play a role in slowing down the onset of menopause. A study published in the Journal of Epidemiology and Community Health in 2018 found that women who followed a diet that was especially high in Omega-3 rich fish and legumes started menopause up to three years later than women whose diets included a higher volume of refined grains such as rice and pasta. Specific nutrients including zinc and Vitamin B6 too were associated with a later menopause. Later menopause is considered better for women from a health perspective as it means you have higher oestrogen levels for longer, which is beneficial for our bones, heart and skin health.

In terms of the other common symptoms relating to peri as well as menopause itself including hot flashes and poor sleep, it is the Mediterranean diet that has been shown to be beneficial. With 7-10 serves of fresh fruit and vegetables, a good proportion of fats via extra virgin olive oil, nuts, seeds and fish as well as legumes and few refined carbs, not only has this diet been shown to help reduce weight gain associated with menopause but to reduce the inflammatory molecules associated with weight gain and hormonal dysregulation.

One study in this area found up to a 20 per cent reduction in hot flashes and night sweats when subjects followed a Mediterranean diet, while diets higher in processed sugars and fats were 20 per cent more likely to experience flashes. Most recently, a diet that included a serve of soy beans each day has been associated with a significant reduction in menopausal symptoms. It is hypothesised that the soy isoflavones play a similar protective role in the body as that of oestrogen itself.

Of all the evidence, there is one standout message:

Losing weight if you need to and working to prevent weight gain in your 40s and 50s is a crucial key step in minimising the symptoms of both perimenopause and menopause.

Not only does this help to reduce inflammatory processes in the body, but keeping your weight under control early will make things significantly easier than it is to try and lose extra weight once it is there. One proven dietary option is following the Mediterranean diet, but ultimately calorie control is the key to success no matter which dietary option you choose.

uthor Susie Burrell is a leading Australian dietitian and nutritionist, founder of Shape Me, co-host of The Nutrition Couch podcast and prominent media spokesperson, with regular appearances in both print and television media commenting on all areas of diet, weight loss and nutrition. 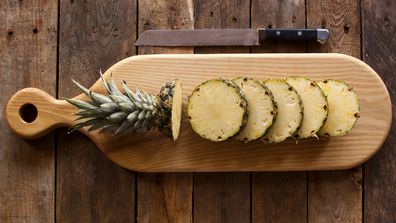 Suffering from creaky joints? Boost your diet with these 14 anti-inflammatory foods

Sam Wood releases new video responding to critics of his ‘before’ and ‘after’ weight...