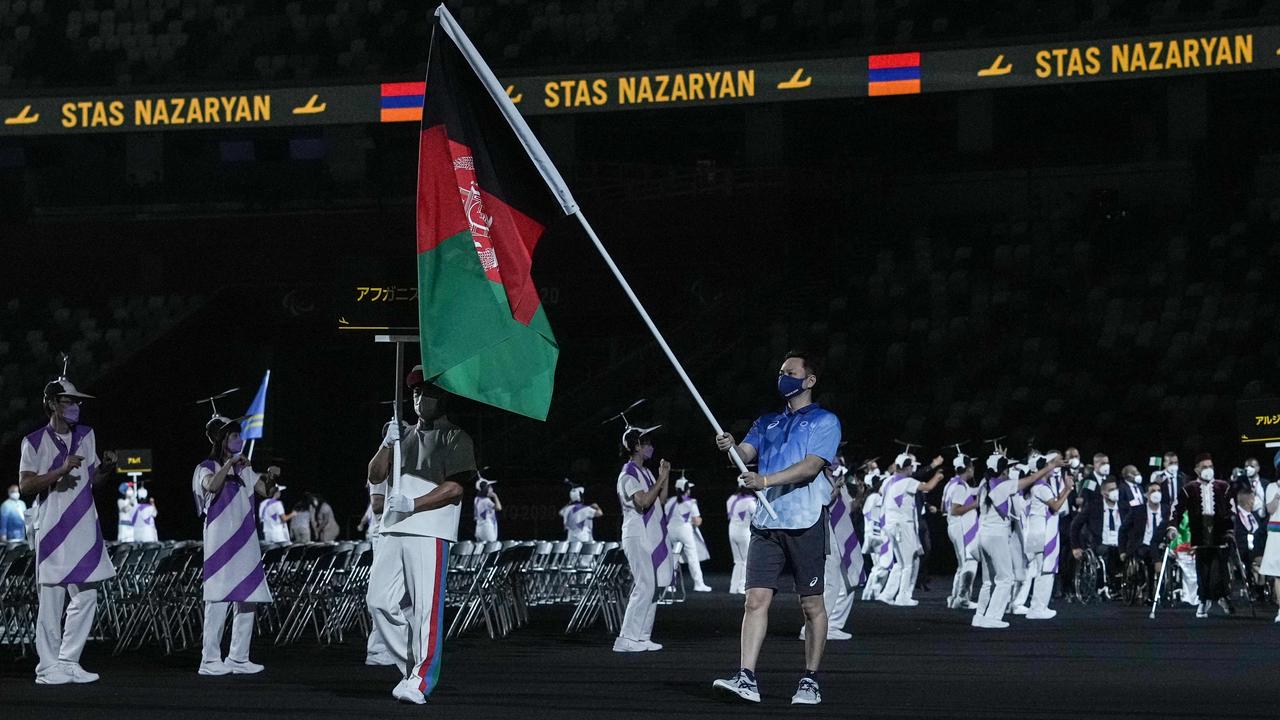 The Tokyo Paralympics has finally opened but the athletes parade has been overshadowed by a touching gesture for some who weren’t there.

The 2020 Paralympics have opened in Tokyo with a touching tribute to Afghanistan during the athletes parade.

After the Taliban swept into power once again following the announcement that the US would withdraw from Afghanistan after 20 years of occupation, horrific images from the rapidly developing humanitarian crisis have been beamed across the world.

While the Taliban has attempted to go on a charm offensive and promised that it would protect the rights of women, it appears to be little more than lip service.

Women have reportedly been killed for not wearing a burqa and are afraid to leave their homes.

Taliban fighters have reportedly gone door to door to search for female journalists and the families of those who aided the US and its allies during the two decade occupation.

The crisis also saw Afghanistan’s Paralympic team forced to withdraw from the Tokyo Games last week because they were trapped in the country.

While there were just two athletes who were set to compete — taekwondo competitor Zakia Khudadadi and discus thrower Hossain Rasouli — neither were able to join their fellow athletes in Tokyo.

Khudadadi, 23, was to be the first woman ever to represent Afghanistan at the Paralympics and said in a video last week that she was “imprisoned inside the house” in the nation’s capital Kabul.

But the IPC confirmed on Monday that with the Taliban takeover, the two athletes would no longer be able to travel to Japan.

“Due to the serious ongoing situation in the country, all airports are closed and there is no way for them to travel to Tokyo.”

But while Afghanistan was not represented by its athletes, its flag was flown during the athlete parade with a Tokyo volunteer waving the flag.

The president of the International Paralympic Committee Andrew Parsons revealed the touching tribute on Monday.

“We will include the Afghanistan flag in the ceremony in a sign of solidarity,” Parsons said.

“It is important to highlight that as it is a message of solidarity and peace that we send to the world.

“We would like to have them here, unfortunately it is not possible, but they will be here in spirit.”

Last week, Parsons revealed that the International Paralympic Committee had no means with which to bring the athletes to the Games.

He was also criticised for the comments by Afghanistan’s chef de mission Arian Sadiqi who told Kyodo News that he was “disappointed and devastated” that nothing had been done by the international community to help them.

“The situation is getting worse by the hour and time is of the essence. We have to find a way to get our athletes out,” Sadiqi said.

“This will be recorded in the history that the world just watched the news but didn’t help the Paralympic athletes from Afghanistan,”

The Australian team, which comprises a record 179 athletes plus officials, was represented by just three people: the joint flag-bearers Danni Di Toro and Ryley Batt, plus the chef de mission Kate McLoughlin, who made the difficult call that the rest of the team would watch the ceremony from the Village.

New Zealand decided not to march at all, saying they were not willing to take any risk of anyone getting infected.

Stop sitting still and do these 8 activities throughout the workday — 3 minutes...

How James Lawrence Prepared His Body for 100 Consecutive Ironmans