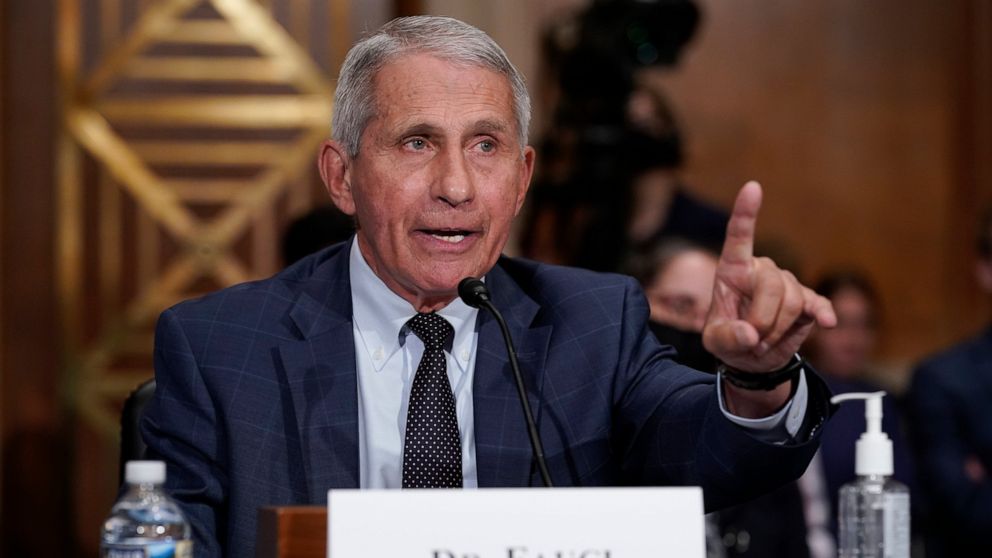 The lawsuit names Columbia Public Schools along with the district’s Board of Education and board members, but is a class action lawsuit that “would apply to school districts across the state that have a mask mandate for schoolchildren,” said Chris Nuelle, a spokesman for Schmitt.

The new school year began Monday in several districts across the state, and with the delta variant causing a big spike in cases, hospitalizations and deaths, more than four dozen districts are requiring students, teachers and staff to wear face coverings. The lawsuit filed by Schmitt, a Republican, cites the low death rate among school aged children.

“We filed this suit today because we fundamentally don’t believe in forced masking, rather that parents and families should have the power to make decisions on masks, based on science and facts,” Schmitt said in a news release.

— US outbreaks force early reversals on in-person learning at schools

SALEM, Ore. — People in Oregon, regardless of vaccination status, will once again be required wear masks in most public outdoor settings — including large outdoor events where physical distancing is not possible — beginning on Friday.

The outdoor mask mandate, which was announced Tuesday by Gov. Kate Brown, is part of a growing list of statewide measures implemented in Oregon in an attempt to slow the rapid spread of COVID-19. There was already an indoor mask mandate.

Over the past month coronavirus cases, fueled by the highly transmissible delta variant, have overwhelmed hospitals in the Pacific Northwest state.

Health officials say part of the reasoning for the new mandate is because they are seeing instances where cases are clustering around outdoor events, such as music festivals.

On Monday there were just 47 adult intensive care unit beds available in the state, with 937 COVID-19 patients hospitalized. Currently more than 90% of the state’s ICU and hospital beds are full.

“We have an obligation to provide a safe workplace for all employees, and a vaccinated workforce is part of that,” Barrett, a Democrat, said in a news release.

The mandate will go into effect Sept. 1. Unvaccinated employees will receive up to two hours of paid leave to get vaccinated and will have until Oct. 29 to produce proof of vaccination. Workers who won’t comply will face 30-day unpaid suspensions. Workers who continue to refuse to get the shots will be fired. The city will provide exemptions from the shots based on medical or religious reasons.

The mandate doesn’t apply to unionized city workers. The mayor’s office says the city is negotiating with the unions on how the requirement will apply to members.

OMAHA, Neb. — The health department for Nebraska’s most populous county has asked the state for approval to issue a countywide mandate requiring people to wear face masks indoors.

If approved, the order would apply not only to businesses, but to schools within the county’s borders, as well.

Douglas County Health Director Lindsay Huse told the County Board on Tuesday that she had sought the approval for the mask order from the Nebraska Department of Health and Human Services.

Huse said the order, if approved, would require masking until community transmission drops below the substantial category and until eight weeks past the time a COVID vaccine is approved for children between the ages of 5 and 11.

WASHINGTON — Dr. Anthony Fauci is urging hospitals and doctors to make greater use of antibody treatments for people infected with COVID-19 as hospitalizations and deaths rise due to the spread of the delta variant.

Infusions of antibody drugs can keep patients who are experiencing mild-to-moderate symptoms from getting so sick they need hospitalization, the government’s top infectious disease specialist said at Tuesday’s White House coronavirus briefing. They also can serve as a preventive treatment for people exposed to someone with a documented infection.

Three antibody products are available under emergency use authorization from the Food and Drug Administration, and they’re free thanks to taxpayer support. But Fauci says they remain “a much-underutilized intervention.”

However, demand for the drugs increased five-fold last month to nearly 110,000 doses, with the majority going to states with low vaccination rates. Texas Republican Gov. Greg Abbott has been among the patients treated with antibodies.

There were also 121 confirmed deaths reported Tuesday, along with 18 listed as “probable.” Hospitalizations ticked up again, increasing by 18 to 2,856.

“This policy is the right thing to do to protect our employees, their families, and our patients,” Ochsner CEO Warner Thomas said.

Ochsner Health, based in suburban New Orleans, say 69% of its employees are already vaccinated.

JERUSALEM — Palestinian health officials say they have received 500,000 doses of coronavirus vaccine donated by the United States through the COVAX initiative, a global vaccine-sharing initiative distributing vaccines to poorer nations.

The Moderna vaccines arrived Tuesday at a Palestinian health ministry facility in the city of Nablus; 300,000 were kept for vaccinating Palestinians in the occupied West Bank, while 200,000 were sent to the Gaza Strip.

At least 729,000 Palestinians in the West Bank and Gaza Strip have received a single dose of coronavirus vaccine, and more than 442,000 people have received two doses, according to health ministry figures.

The Palestinian Authority has been working to secure its own vaccine supplies, in large part through the U.N.-backed COVAX program. Vaccinations lag considerably compared to neighboring Israel, which has fully vaccinated more than 5.5 million of its 9.3 million people.

LANSING, Mich. — A Catholic school in Lansing has lost an appeal over a Michigan policy that required masks on young kids earlier in the pandemic.

Although the statewide mandate ended, some counties are stepping in and requiring masks in schools when the 2021-22 year starts.

Resurrection School and some parents sued in 2020, saying a state mask order violated the free exercise of religion, among other objections. A judge, however, refused to intervene and issue an injunction.

U.S. District Judge Paul Maloney “correctly concluded that because the requirement to wear a facial covering applied to students in grades K–5 at both religious and non-religious schools, it was neutral and of general applicability,” the court said.

Masks were not required at the fair. The event was canceled in 2020 due to the pandemic.

“Obviously, we’d love to have vaccinated 1,000 people,” Pettis County Health Administrator JoAnn Martin told the Post-Dispatch. “But we are glad we made the effort.”

ATLANTA — More than 100 National Guard personnel are being deployed to 20 hospitals across Georgia to help deal with the state’s latest surge of COVID-19 cases, Georgia Gov. Brian Kemp announced TuesdayN.

The 105 medically trained Guardsmen and women will help staff at hospitals in Atlanta, Macon, Savannah, Brunswick, Albany and other cities across the state, Kemp said in a statement.

“These guardsmen will assist our frontline healthcare workers as they provide quality medical care during the current increase in cases and hospitalizations, and I greatly appreciate General Carden and his team for their willingness to answer the call again in our fight against COVID-19,” Kemp said.

The Guard is coordinating with the Georgia Emergency Management Agency and the Department of Community Health in the effort, Kemp said.

NEW YORK — A new report from California finds that COVID-19 hospitalizations and deaths continue to be far more common in unvaccinated people than those who got the shots.

But it also indicates fully vaccinated people accounted for a higher proportion of hospitalizations and deaths than previous reports.

Health officials looked at about 43,000 reported coronavirus infections in Los Angeles County residents, ages 16 and older, that were reported in May, June and July. They found that about 25% were fully vaccinated people.

But the report also found about 12% of the infected people who were hospitalized and about 12% who died were fully vaccinated.

Last month, federal officials said only about 3% of hospitalized patients and fewer than 1% of deaths were vaccinated. The CDC officials noted the proportion of Americans who are fully vaccinated has been rising, and therefore they expected to see a rise in infections among vaccinated people.

Hutchinson says it’s the first time since the coronavirus pandemic began that no ICU beds were available for COVID-19 patients. Virus patients make up about half of the state’s ICU beds. The number of virus patients in ICUs and on ventilators reached a new high in the state on Monday.

“Everyone should know the strain this puts on our hospitals and the need to get our vaccinations and how critical our bed space is,” Hutchinson said at a news conference.

Hutchinson says hospitals in the state were working to open more ICU beds for virus patients.

TEL AVIV, Israel — The number of daily coronavirus cases in Israel is nearing the record set in January.

The government reported Tuesday that 9,831 new cases had been registered a day earlier, the highest since the record of 10,000 new cases was set in mid-January.

The number is notable because more than 5.5 million of Israel’s 9.3 million have received two doses of the vaccine, one of the fastest vaccination drives in the world. In recent weeks, the delta variant has driven a surge of infections and with it, new restrictions. Nearly 1.6 million people have received a third jab.

NAIROBI, Kenya — The director of the Africa Centers for Disease Control and Prevention is warning “we may never get to herd immunity” against COVID-19 given what is known about the coronavirus.

John Nkengasong spoke to African health ministers on Tuesday about infections that occur in people despite vaccinations. The Africa CDC has aimed to vaccinate 60% of the continent of 1.3 billion people, up to 30% of them this year.

But the more infectious delta variant is driving a resurgence in cases and forcing governments around the world to reconsider lockdowns and other measures. The slow and limited flow of vaccines to African nations while richer nations secure supplies has complicated efforts to contain the pandemic.

The Africa CDC director for months has warned against allowing COVID-19 to become endemic on the continent with some of the world’s least-equipped health systems.

PORTLAND, Maine — A spokesman for independent Sen. Angus King says the senator is feeling better as he recovers from the coronavirus.

The 77-year-old King announced Aug. 19 he had tested positive for the coronavirus. King was vaccinated for the disease earlier this year.

Maine health officials have reported 95% of state residents who are in their 70s have been fully vaccinated against the coronavirus. More than 70% of the state’s eligible population is fully vaccinated.

Maine CDC has reported more than 74,000 total cases and 924 confirmed deaths since the start of the pandemic.

Australia cries foul as Opals robbed in Olympic ’travesty’Sport can be so cruel.