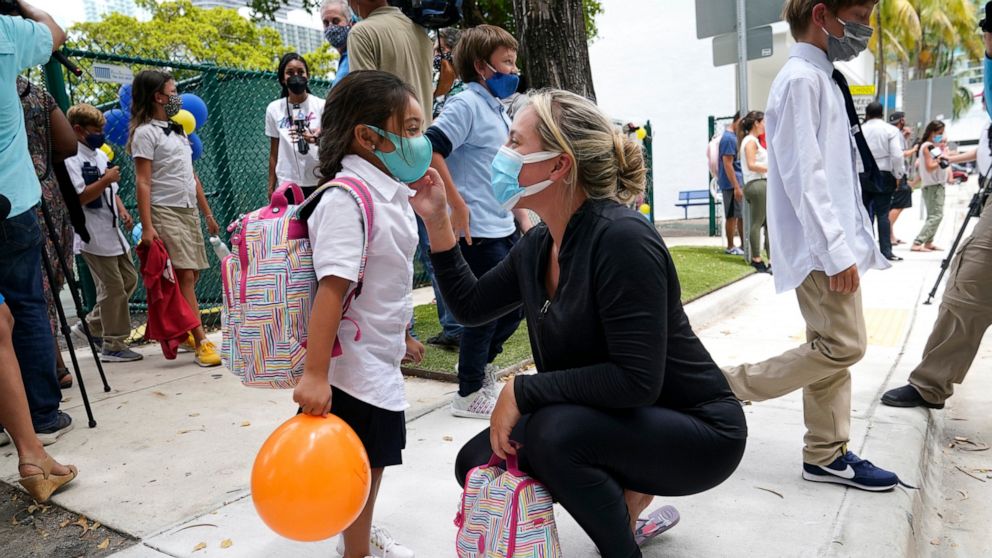 They are pleading with the public to avoid unnecessary ER visits to let hospitals focus their resources on treating COVID-19 patients.

There were 813 COVID-19 patients hospitalized statewide Wednesday, just below the record 818 on Jan. 5 when vaccination efforts were starting. There are 252 virus patients in ICUs and 132 patients on ventilators, according to state data — both all-time highs.

Dr. Clay Marsh, the state’s coronavirus expert, says “our hospitals are being stressed in ways that they haven’t been stressed before.”

In southern West Virginia, Princeton Community Hospital has no ICU beds available due to an increase in COVID-related patients.

But hospital president and CEO Karen Bowling says people with emergency needs should still come to the hospital. Incoming patients will stay in the emergency department until a bed becomes available, either at the hospital or somewhere else.

— COVID-19 surge in the US: The summer of hope ends in gloom

— Read AP coverage of the pandemic at https://apnews.com/hub/coronavirus-pandemic.

BATON ROUGE, La. — Louisiana’s hospitals, crammed with coronavirus patients and Hurricane Ida-related emergency visits, are starting to see a bit of much-needed relief from the latest surge of COVID-19.

Hospitalizations from the coronavirus have been consistently falling over the last three weeks after breaking records and reaching 3,022 patients on Aug. 18.

The state health department reports that that number has now dropped to 1,895. It’s the first time it has been below 2,000 since the end of July.

Public health officials caution that hospitals continue to struggle with medical needs tied to cleanup and recovery from Ida.

ANNAPOLIS, Md. — Maryland is authorizing COVID-19 booster shots for all residents 65 and older who live in congregate care settings.

Hogan told a news conference Wednesday that “boosters can now be immediately administered.”

While the federal government has yet to say when most people should get booster shots, Hogan said the U.S. Centers for Disease Control and Prevention has approved them for people who are immunocompromised, and a Maryland study indicates many in those facilities are immunocompromised.

He said the state is “following CDC guidance but broadening the definition.”

Comstock says a driver ran over and destroyed signs put up around the vaccine clinic’s tent.

In a separate incident, someone also threw an unidentified liquid at a nurse working a different mobile clinic in front of a restaurant.

ST. PETERSBURG, Fla. — A Florida judge has ruled the state cannot enforce its ban on mask mandates in public schools while an appeals court sorts out whether the ban is legal.

Cooper says the overwhelming evidence before him in a lawsuit by parents challenging the ban shows wearing masks does provide some protection for children in crowded school settings — particularly those under 12, who are not yet able to get vaccinated.

“We’re not in normal times. We are in a pandemic,” Cooper said during a remote hearing. “We have a variant that is more infectious and dangerous to children than the one we had last year.”

The case next goes before the 1st District Court of Appeal in Tallahassee.

TUCSON, Ariz. — Arizona’s second most populous county is prodding its workforce to get COVID-19 vaccinations by requiring employees who refuse the shots to pay more for their health insurance.

The Pima County Board of Supervisors voted to make unvaccinated employees lose discounts amounting to about $1,570 annually. Supervisor Steve Christy voted in opposition, saying the move was wrong and it’s illegal to penalize workers who choose to not get vaccinated.

The board previously authorized a $300 bonus plus three days of paid leave for county workers who have been vaccinated.

MADRID — Spanish health authorities have authorized the use of an additional shot of a COVID-19 vaccine only for people with suppressed immune systems, such as organ transplant recipients.

The government’s board of experts deemed it was too early to recommend a booster shot for the population at large. Health Minister Carolina Darias says authorities will be studying other groups that could benefit from a third shot.

WASHINGTON — The summer was supposed to mark America’s independence from COVID-19 but it’s ending with the U.S. firmly under the command of the coronavirus, with deaths per day back up to levels in March.

The delta variant is filling hospitals, sickening alarming numbers of children and driving coronavirus deaths in some places to the highest levels of the entire pandemic. School systems that reopened their classrooms are abruptly switching back to remote learning because of outbreaks.

The U.S. recorded 26,800 deaths and more than 4.2 million infections in August. The number of monthly positive cases was the fourth-highest total since the start of the pandemic.

The U.S. is averaging over 150,000 new cases per day, levels not seen since January. Deaths are close to 1,500 per day, up more than a third since late August. Overall, the outbreak is still well below the all-time peaks reached over the winter when deaths topped out at 3,400 a day and new cases at 250,000 per day.

HONOLULU — A resort in the famed tourist mecca of Waikiki will be the first in Hawaii to require proof of COVID-19 vaccination for all employees and guests.

Starting Oct. 15, Alohilani Resort will require employees, patrons and guests to show proof they’re fully vaccinated. The requirement will be in place for the six other Waikiki properties owned or operated by the Highgate real estate investment and hospitality management company.

Hotel officials say it’s the right thing to do as Hawaii struggles with a surge in COVID-19 cases and hospitalizations because of the highly contagious delta variant.

There was an average of 706 newly confirmed daily cases across Hawaii between Aug. 30 and Sept. 5, according to the state Department of Health. Hawaii’s vaccination rate stands at 64%.

The state was reporting 253 cases per week in late June when officials declared an end to a coronavirus emergency.

COVID-19 hospitalizations are straining facilities nearly full of other patients.

GENEVA — Switzerland will require people attending indoor events or eating in restaurants to show a proof of vaccination against the coronavirus or other documents certifying recovery from COVID-19 or a recent negative test.

The measure starts Monday and runs through Jan. 24. Authorities will accept similar vaccination certificates from neighboring countries in the European Union. Switzerland is not in the 27-country bloc.

Switzerland has recorded a 14-day incidence of 409 cases per 100,000 people. Hospital and intensive-care unit occupancy rates are at about 80%.

Swiss authorities will examine whether to allow into the country people who have not been vaccinated.

GENEVA — The head of the World Health Organization is calling on rich countries with large supplies of coronavirus vaccines to refrain from offering booster shots through the end of the year.

WHO Director-General Tedros Adhanom Ghebreyesus says he was “appalled” at comments by pharmaceutical manufacturers who say supplies are high enough to allow for both booster shots and vaccinations in countries in dire need of shots.

The WHO chief says, “I will not stay silent when companies and countries that control the global supply of vaccines think the world’s poor should be satisfied with leftovers.”

Wealthy nations including the U.S., Israel, Britain, Denmark, France, Germany and Spain have begun or are considering plans to offer them to their vulnerable people.

WHO says 5.5 billion coronavirus vaccines have been administered so far, 80% of them coming in upper- and middle-income countries.

PARIS — Some 300,000 people in France have signed up to receive a third COVID-19 vaccine shot since the government started offering them a week ago.

While some health officials have argued against booster shots until more of the world is vaccinated, France is recommending people with pre-existing health problems and those over 65 receive a third shot six months after their second dose.

France’s fourth surge of infections has been receding in recent weeks as the government has stepped up vaccination efforts.

GENEVA — The U.N.-backed program to get vaccines to the neediest people in the world has again scaled back its target to ship doses this year, projecting about 1.4 billion will be made available through the end of the year.

Gavi, the Vaccine Alliance, says its COVAX program has faced setbacks including export restrictions in hard-hit India, a key producer of vaccines, as well as regulatory hurdles for some vaccine candidates and manufacturing troubles elsewhere.

Still, Gavi says COVAX deliveries are ramping up significantly and another 1.1 billion doses are expected to become available beyond the 330 million doses it has already delivered. Most are destined for poor developing countries.

Gavi had originally projected 2 billion doses could be shipped through COVAX this year, then in July lowered that projection to about 1.8 billion.

BANGKOK — A medical research institute in Thailand has opened registrations for schools to get COVID-19 vaccinations for students ages 10 to 18.

A campaign to combat a third wave of the coronavirus has resulted in more than 90% of Bangkok residents receiving at least one vaccine dose and 22% receiving two.

A mobile vaccination unit converted from an old bus was deployed for the first time Wednesday to bring shots to people unwilling or unable to travel to fixed venues to get inoculated. It serves mostly residents with mobility issues or jobs that make it inconvenient to travel.

The official Saudi Press Agency says starting Wednesday, Saudi citizens can travel to the UAE, among other destinations previously deemed off-limits because of their high levels of infection. Those who violated the restrictions faced a three-year travel ban.

Although Saudi officials had attributed the July ban to a surge in coronavirus cases, the move came as economic competition and political friction emerged between the Gulf Arab heavyweights, injecting uncertainty into their long-standing alliance.

The end of the flight ban comes just weeks ahead of the 2020 World Expo in Dubai, which was delayed a year because of the pandemic.

The UAE is counting on the event to draw millions of visitors and billions of dollars to stimulate the economy and showcase its achievements on the world stage. Saudi Arabia is to have one of the Expo’s largest pavilions.

BERLIN — The head of Germany’s disease control agency says the vaccination rate needs to increase to avoid another wave of the coronavirus and “the pandemic is not over yet.”

Lothar Wieler of the Robert Koch Institute says Germany could experience another rise in cases in the fall, potentially overwhelming the country’s health system. On Wednesday the institute reported 13,565 confirmed cases.

While infection rates have been flat in recent days, hospitalizations have increased. Intensive care patients have almost doubled to more than 1,300 in the last two weeks, Wieler says.

Most hospital patients are younger than early in the pandemic and aren’t vaccinated. Wieler says everyone who doesn’t get vaccinated likely will contract the virus at some point.

More than 61% of the nation’s population is fully vaccinated, lower than in several other European countries.

Sugar content of your favourite drinks, ranked from low to high

NFL Playoff Predictions: These Teams Are in Danger of Slipping This Season