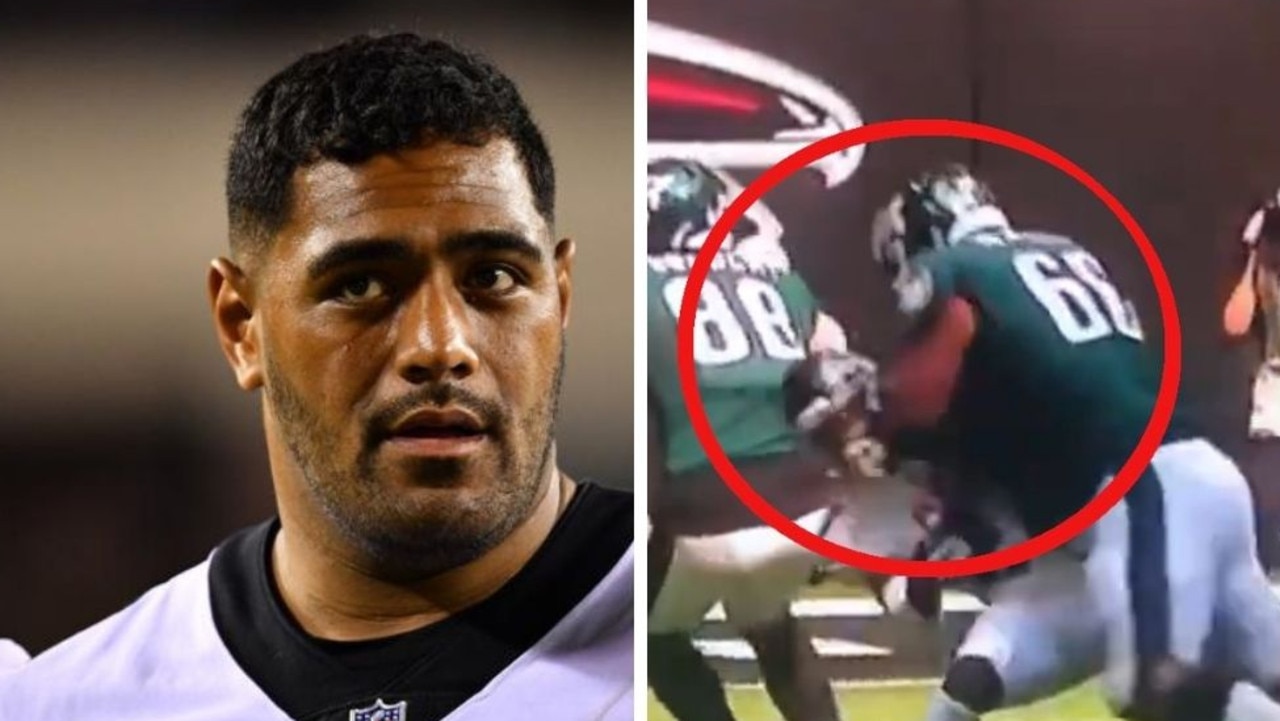 Die-hard American football fans were blown away by Aussie Jordan Mailata’s efforts in the NFL, where he put on some brutal hits.

The 24-year-old started for the Eagles in their comprehensive 32-6 win over the Atlanta Falcons and made a massive impact.

Mailata, who signed a mammoth deal worth up to $108m (AUD) just days ago, made his presence felt with a couple of epic plays.

The 160kg giant, who also stands 203cm tall, played a key role in setting up two touchdowns with some brutal blocks.

Mailata showed perfect timing to clean up an opposition player with a huge block, clearing the way for wide receiver Jalen Reagor to score a touchdown. In another play, he also created space for rookie Kenneth Gainwell to score.

Mailata’s efforts were clearly appreciated by his teammates, with Reagor tweeting a video of his block with the caption: “Thank you big fella”.

The ex-South Sydney Rabbitohs talent’s brutal blocks sent his rivals crashing back to earth and US viewers couldn’t get enough of it, taking to social media to praise the Aussie star’s savage hits.

Sportscaster John Clark said “Mailata destroyed this man” with his first block while reporter Stephen Gutowski added: “Can I just express how happy I am to see @jordan_mailata make it at this level after only getting into football a few years ago? What a dude.”

Philadelphia coach Nick Sirianni said he was extremely pleased with Mailata’s performance and described his block for Reagor’s touchdown as a “really big-time play”.

“I can’t imagine that DB (defensive back) feeling too good,” the coach joked, referring to the rival Mailata crunched on the play.

“I was just doing my job,” Mailata said of the big hit on Atlanta’s Richie Grant.

“The timing had to be perfect. Just bee-lining it and bury someone if you get the opportunity.”

It was a dream showing from the Australian, who was even offered a can of beer for his troubles by a keen Eagles fan in the grandstand after the match.

It has been a whirlwind few days for Mailata, who is still coming to terms with the reality of his massive contract.

He had been in a fight for the starting offensive tackle position at the Philadelphia Eagles — a battle that had a fortune riding on it.

Mailata won the battle and has also scored a whopping four-year contract that could be worth up to $108 million ($USD80m) — if he meets performance bonus clauses.

“Everyone (at home) called me ‘Big Money’. I told them not to call me that.

“I’ve been wanting to buy my parents a house so I can finally do that.

“I think it is a movie. I’m just waiting for someone to say ‘cut’, then all the lights come down.

“I’m trying to take it day by day … keep getting better, one per cent better every day. I strongly believe in that.”