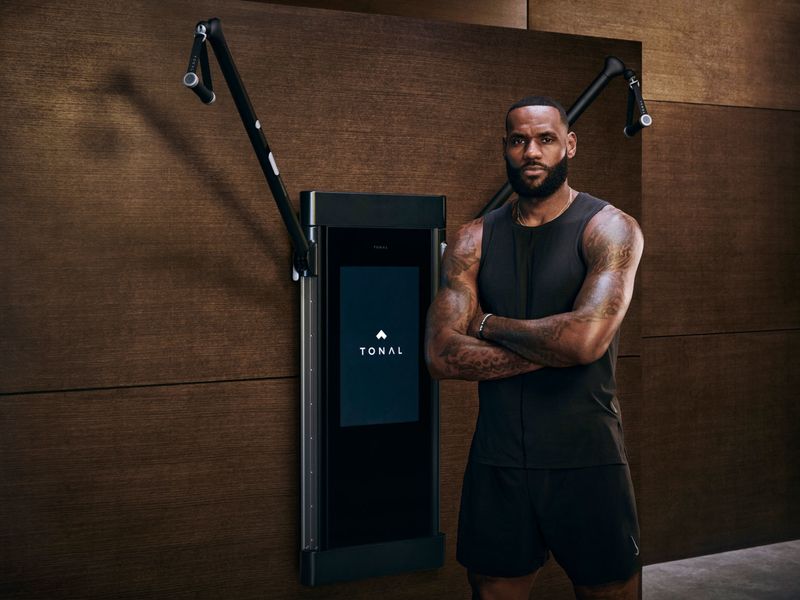 At-home fitness brand Tonal has added another big-name star to its endorser roster with the signing of LeBron James. The four-time NBA champion stars in a new ad that spotlights his dedication on and off the court. He has also taken an undisclosed financial stake in Tonal.

The spot, which was handled by R/GA and directed by Paul Hunter, shows a shirtless James working out on the digitally connected at-home gym machine as he uses his voice to narrate how he gained his strength.  “Everything you see me do was made possible by what you don’t see, because when you’re not looking, I go to work,” James says in the ad. “We all have the strength to see what’s possible, it’s up to us to unlock it.”

Tonal, billed as “the world’s smartest home gym,” was founded in 2015, but it was not until 2018 when it made its arrival to the fitness industry. The 24-inch strength-training machine provides users with virtual coaches and personalized workouts using a digital weight system that uses magnets and electricity rather than traditional metal weights.

Tonal, a part of the at-home fitness category, faces competition from other brands such as Mirror and Peloton that have also used celebrities and athletes to push products. Peloton, for instance, has partnered with Beyonce and surfer John John Florence and Olympic gold medalist swimmer Kathleen Baker to promote its bikes.

Tonal’s growth strategy includes growing its retail presence via showrooms where interested buyers can test out the fitness system. It currently has seven showrooms, including in Chicago and New York, but plans to add three more in the coming weeks. Tonal also plans to increase its distribution inside Nordstrom from 40 to 50 stores.

Seventy percent of Tonal customers have made purchases for the device online and 30% of buyers have visited a showroom, a Nordstrom store or spoken with an advisor before purchasing, according to the brand.

According to Tonal, James was introduced to the brand by his personal trainer,  Mike Mancias who also serves on Tonal’s advisory board.

The endorsement strategy is part of Tonal’s approach to use an extensive network of fitness and lifestyle influencers to attest to the credibility of the product. “I think that authenticity and credibility of people you can trust knowing and loving the product is a really important part of our marketing strategy,” said Chris Stadler, Tonal’s chief marketing officer.  “For someone like LeBron who has access to the best equipment, the best trainers, the best technology in the world, when he discovered Tonal I think that was a big unlock for his training.”

At-Home Back Workouts to Build Size and Strength