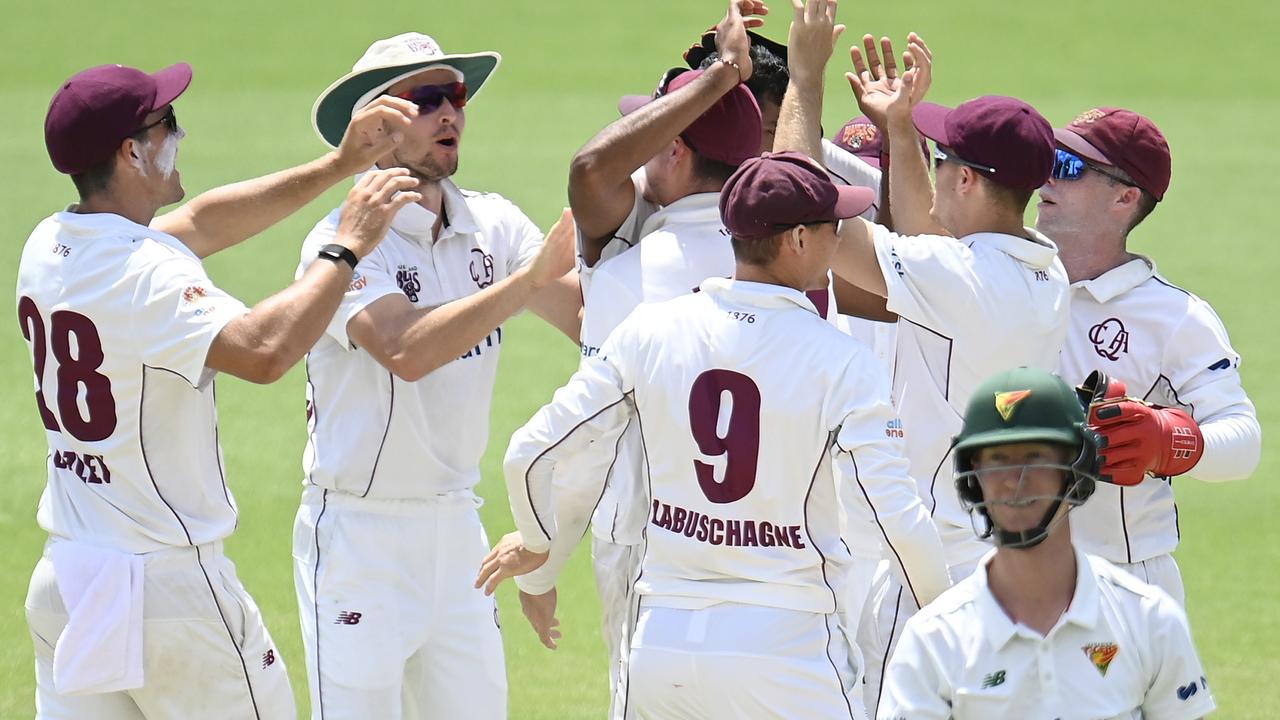 Tasmania lost two wickets in quick succession as the contrast between their batting order and that of the star-studded Bulls was laid bare on day four.

Tasmania frustrated Queensland into a draw the last time the two states met but the Bulls look in pole position to have the last laugh this time around.

Test entertainment machine Marnus Labuschagne twice put on a batting masterclass as the Queenslanders set Tasmania a formidable target, and on day four, the Tigers certainly made the chase look like hard work.

Charlie Wakim would’ve been kicking kicking himself after leaving Matt Kuhnemann’s deliver to bounce up and clip the bails off.

When Jordan Silk went without scoring less than two overs later, it looked as if Caleb Jewell would need to live up to his name and continue to be Tasmania’s shining light.

It’s all starting to come together for the Australian top order ahead of the Ashes and Marnus Labuschagne is only just warming up.

The run-hungry Test star showed all his next-level credentials in a stunning second innings score of 60 against Tasmania as an entree to a summer of potentially feasting on English bowlers.

After Queensland spinner Matt Kuhnemann showed the cupboard is not completely bare behind Nathan Lyon with a maiden five-wicket haul to rout the Tigers in Townsville, Labuschagne, who made 136 in the first innings, took things up a notch.

In the search for quick runs, despite having a 302-run first innings lead, Labuschagne went in to T20 mode, smashing three sixes in a 37-ball 50. Labuschagne reached 60 not out, off 46 balls, with former Test opener Joe Burns unbeaten on 46, when Queensland captain Usman Khawaja declared with his team 438-runs in front.

The Bulls didn’t, however, have things their own way as the Tigers dug in for the fight, and only a late wicket hit a blistering start to their chase. Tasmania was 1-127 at stumps, with 311 runs to get in 96 over their final day target.

With test opener David Warner back in form at the T20 World Cup, potential opening partners Khawaja and Marcus Harris both making runs, and Cameron Green also scoring a half-century for WA, Australian selectors might be smiling.

After his day one run haul, Labuschagne said he wanted more.

“I’m always asking myself ways to get better, 130s are a good score and you’re not complaining about that but you want to make it into a big 180-plus score,” he said.

“They’re the sort of knocks that really put your team on the front foot (and) I certainly want to be making big scores.

“Obviously I missed out the first two games with a really big score, but I was able to spend some time (in the middle) and really found some rhythm out there.

“As a cricketer I don’t think anyone is really satisfied ever, it’s just one of those games.”

Kuhnemann‘s career-best figures of 5-60 to roll Tassie for 182 highlighted Queensland’s bowling depth as he took over from absent Mitchell Swepson, who took 32 Shield wickets last summer.

The Bulls were also without leading quicks Michael Neser and Mark Steketee but still had enough to take out a Tasmanian team coming off a last-start Shield win against Western Australia.

The Tigers fell apart after the early day three dismissal of topscorer Jordan Silk, losing 6-27 with three of those wickets going to Kuhnemann.

Fast bowler Gurinder Sandhu, playing his first Shield game for Queensland after stints with NSW and Tasmania, finished with figures of 3-44 in another promising showing.

Usman Khawaja may not be thinking about an international recall but Australian selectors might be after the Queensland skipper scored a second straight Sheffield Shield century to stake a solid Ashes claim.

The 34-year-old raced to the top of the Sheffield Shield run-scoring list as the Bulls batsman achieved a 20-year first with Matthew Renshaw also knocking out a hundred against Tasmania in Townsville.

It was the first time since 2006 that the number three, four and five batters for a team all scored centuries in a Shield game, coming after Test star Marnus Labuschagne made 136 on the opening day.

After scoring an epic 174 in his last Shield innings against South Australia, Khawaja, who played the last of his 44 Tests during the 2019 Ashes, said he refused to worry about selection any more. But he also declared he would bat anywhere if asked.

“People are always going to ask me about Test cricket, that’s fair enough, there is an Ashes coming up,” Khawaja said.

“But it’s not even in the forefront, I am just trying to win games for Queensland.”

His team was on the path to doing that, with Tasmania 4-150 at stumps, hoping a rearguard action from Jordan Silk (45 not out) and captain Beau Webster (20 not out) could keep them in the game.

Khawaja remained the standout performer and with Test opener David Warner’s first-choice batting partner Will Pucovski yet to pad up this season and Marcus Harris out for just nine in his first innings for Victoria, Khawaja has been put in the conversation as an experienced hand for the Ashes.

But a middle-order slot could also be up for grabs with the number five and six spots set to be filled by all-rounder cameron Green and a yet to be confirmed batsman.

Matthew Wade filled the role last summer against India, but was overlooked for the squad picked to tour South Africa, a tour which never happened.

Travis Head was recalled for that tour, but never got to strut his stuff and the South Australian has also reeled off a one-day double-hundred and a Shield innings of 163 this season to position himself for an Ashes berth.

But Khawaja’s output should ensure his name is in that Ashes conversation. Former national selector Mark Waugh said recently Khawaja had to be in the mix for a Test recall against England because of his experience.

He started the second day of the Sheffield Shield clash in Townsville not out on 63 and brought up his hundred off 165 balls after nearly being run out on 95.

He was eventually dismissed for 119 before lunch, going for quick runs with former Test opener Renshaw taking over, making 120 not out off just 167 balls before Queensland declared a 6-487.

After making an opening-day century of his own, Bulls and Test star Marnus Labuschagne said both Khawaja and Joe Burns, who made 79, were batting “beautifully”.

“Both those guys are probably two of my favourite guys to bat with. Both very different, but both very enjoyable to bat with,” Labuschagne said.

“I think they’re both batting beautifully. I thought Joe’s first innings last week in Adelaide was a very good innings.

“With Uzzie’s innings in the second innings of that game it was very good and he’s backed it up. He really put pressure on the spinners and didn’t let them settle, which is really good for a number four to be able to come in and do that straight away.”

RACE FOR THE ASHES

Over 50s game for fitness – UQ News – The University of Queensland, Australia...

How to mix up your fitness routine for long-term strength and happiness – The...