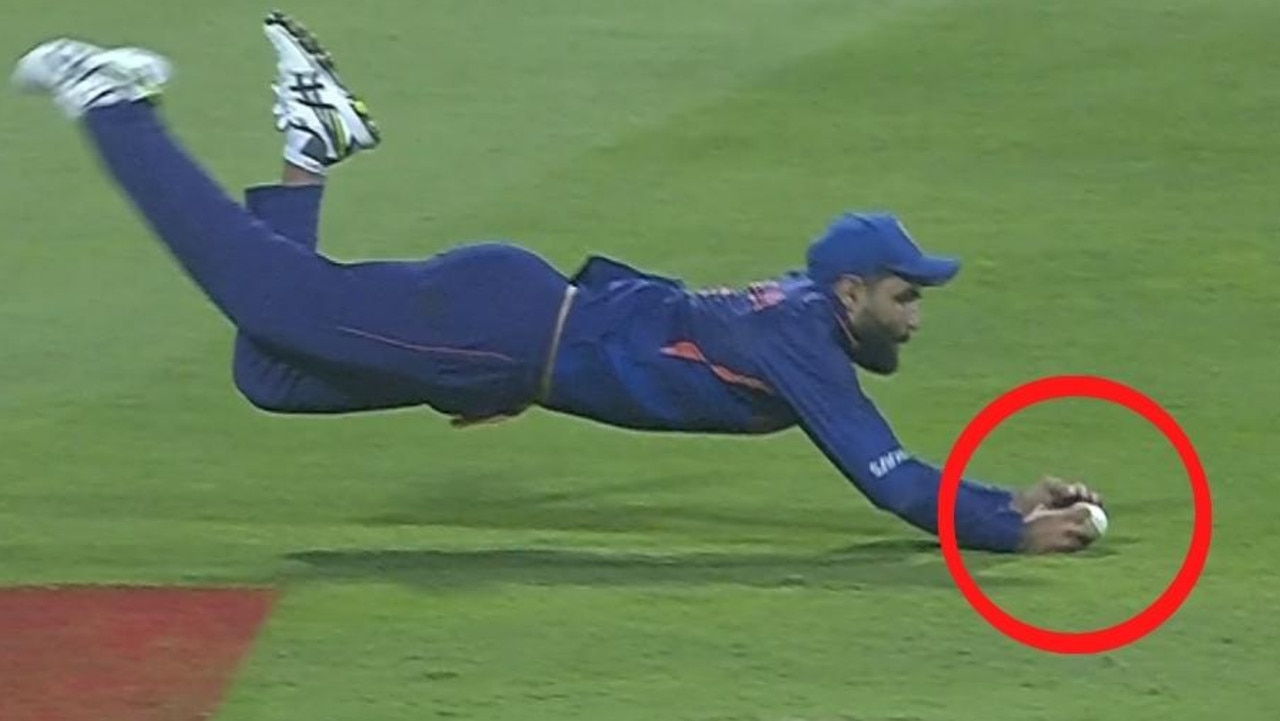 Indian all-rounder Ravindra Jadeja stunned cricket fans with a contender for catch of the T20 World Cup — or so he thought.

Afghanistan was 6/126 in the penultimate over of the run chase when Karim Janat attempted a wild slog off Indian seamer Mohammed Shami.

Jadeja steamed in from the boundary rope and claimed a stunning diving catch inches from the turf — or so he thought.

“You can tell by the celebrations just how good it is. It’s an incredible catch.”

The on-field officials sent the decision upstairs to third umpire Aleem Dar, who after several slow-motion replays overturned the on-field call of out.

Replays showed the ball had stuck between Jadeja’s fingers before his hands struck the turf, and Dar believed the ball also made contact with the grass.

“The ball is hitting the ground. I’ve made my decision,” he said.

Jadeja and Indian captain Virat Kohli were baffled by the decision.

“But I can understand why the TV ump says it isn’t out.

“It’s an absolutely incredible effort, but just as he gets there, he doesn’t quite have it in hand, and it’s sort of between the fingers.

“It seems as it hits the ground, the ground helps the ball into the hands. What an effort, what a pity.”

Although Dar’s decision abided by the Laws of the game, that didn’t stop cricket fans from voicing their anger.

England batter Sam Billings posted: “Thought that was out tbf … Jadeja is ridiculous in the field!”

Former Netherlands star Wesley Barresi tweeted: “That was a spectacular catch from @imjadeja. How that was called not out is a little unfair!”

Janat finished unbeaten on 42 as Afghanistan suffered a 66-run defeat, their second loss of the T20 tournament.

Shami finished with figures of 3/32, while Indian spinner Ravichandran Ashwin bowled an economical four-over spell of 2/14.

“Net run rate was on the back of our mind,” Kohli said after the win.

“We spoke in the team meeting that we have to focus on the chance we have (to qualify for the semi-finals) and stay positive and hunt that chance down.”

India will next face Scotland on Saturday at 1am AEDT, while Afghanistan will take on New Zealand at 9pm AEDT on Sunday.

Germans divided over restrictions for the unvaccinated

Apple Fitness Plus is coming to 15 new countries with new types of workouts...

24 ways to spoil your fitness-loving friends this Christmas