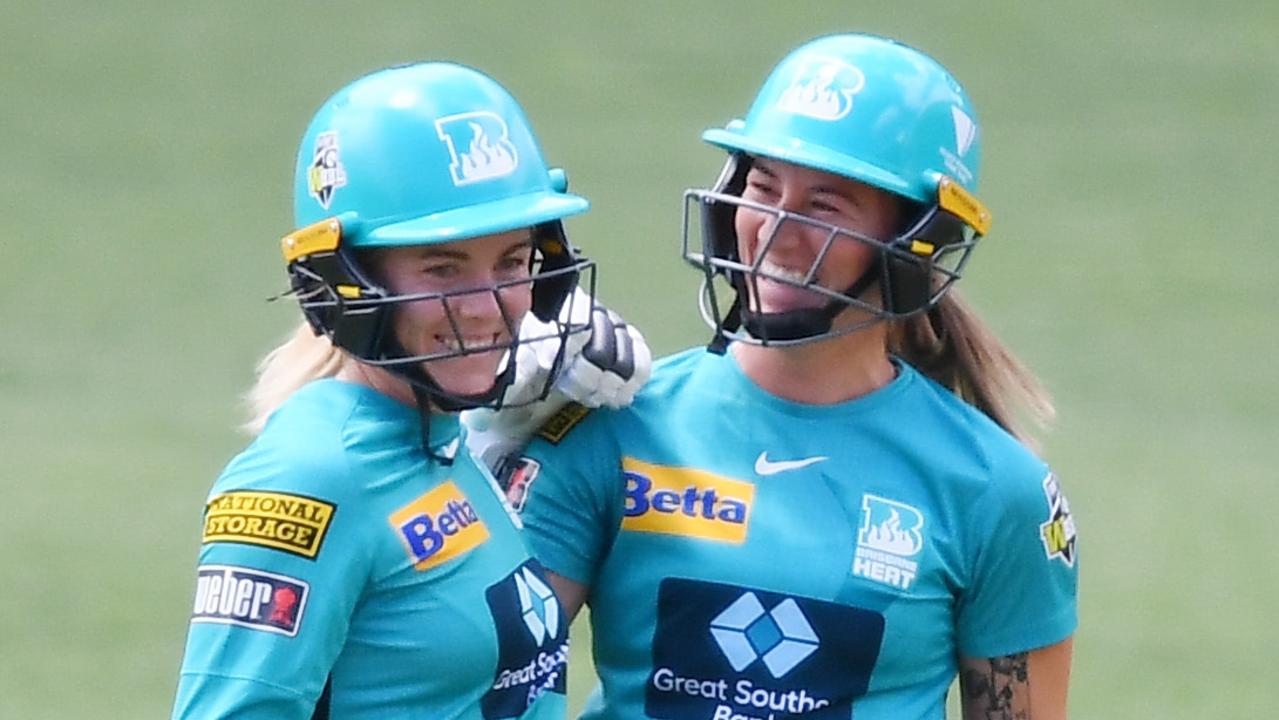 A half-century to opening batter Georgia Redmayne helped the Brisbane Heat to victory over the Sydney Thunder on Sunday afternoon.

Georgia Redmayne hit a half century and Poonam Yadav starred with the ball as the Brisbane Heat piled the pressure on defending WBBL champions the Sydney Thunder.

It was a crunch clash at Adelaide Oval for the Thunder and despite coming off back-to-back wins, they fell to a heavy five-wicket defeat to the Heat which leaves them bottom of the table.

Watch every game of the Weber WBBL Live & On-Demand on Kayo or catch up for FREE with minis on Kayo Freebies. Join Kayo Now >

Indian spinner Yadav set up the win with a brilliant bowling display, while Redmayne anchored the Heat’s chase to get her side back to winning ways.

“I probably struggled a bit, went through a bit of a lull mid innings, and was lucky enough to have Mikayla Hinckley and Georgia Voll hit some massive sixes at the other end,” Redmayne said.T

“The partnerships worked well today and we put a lot of pressure on the fielders.”

Smriti Mandhana (37) and Phoebe Litchfield (40) helped steer the Thunder to a competitive total, but both fell to the 30-year-old Yadav.

After the Thunder reached 1-51 at the end of the powerplay – their best start of the season – a big total was on the cards, but Yadav (3-17) spun through their middle order, trapping Corinne Hall LBW for a duck in between claiming the big scalps of Mandhana and Litchfield.

Late cameos from Sammy-Jo Johnson (12) and captain Hannah Darlington (19*) gave themselves a reasonable total of 7-143 to defend, particularly given their struggles in the middle of the innings.

Brisbane lost the dangerous Grace Harris (6) early in their chase, but Redmayne and Georgia Voll put the Heat back into cruise control.

Darlington brought herself back into the attack to get a wicket, and she did make the breakthrough when she bowled Voll for 25.

It didn’t alter the trajectory, though, as Redmayne and Mikayla Hinckley coasted along until Redmayne eventually fell for 57 off 45 balls.

The Heat made a meal of getting the final runs by losing a few quick wickets, but in the end they got the job done with 10 balls to spare.

Brisbane’s Georgia Prestwidge won’t want to watch a replay of the opening over the match, when the medium-pacer bowled three erratic wides and went for 13 runs. She did go on to take the important wicket of Sammy-Jo Johnson later in the innings, but was the Heat’s most expensive bowler after she conceded 34 runs in her three overs, which included six wides.

How this dad lost 75kg and found his life again

Spring cleaning for health: Easy ways to re-energise your diet and health

The Latest: UN chief decries pandemic’s harm to the poor