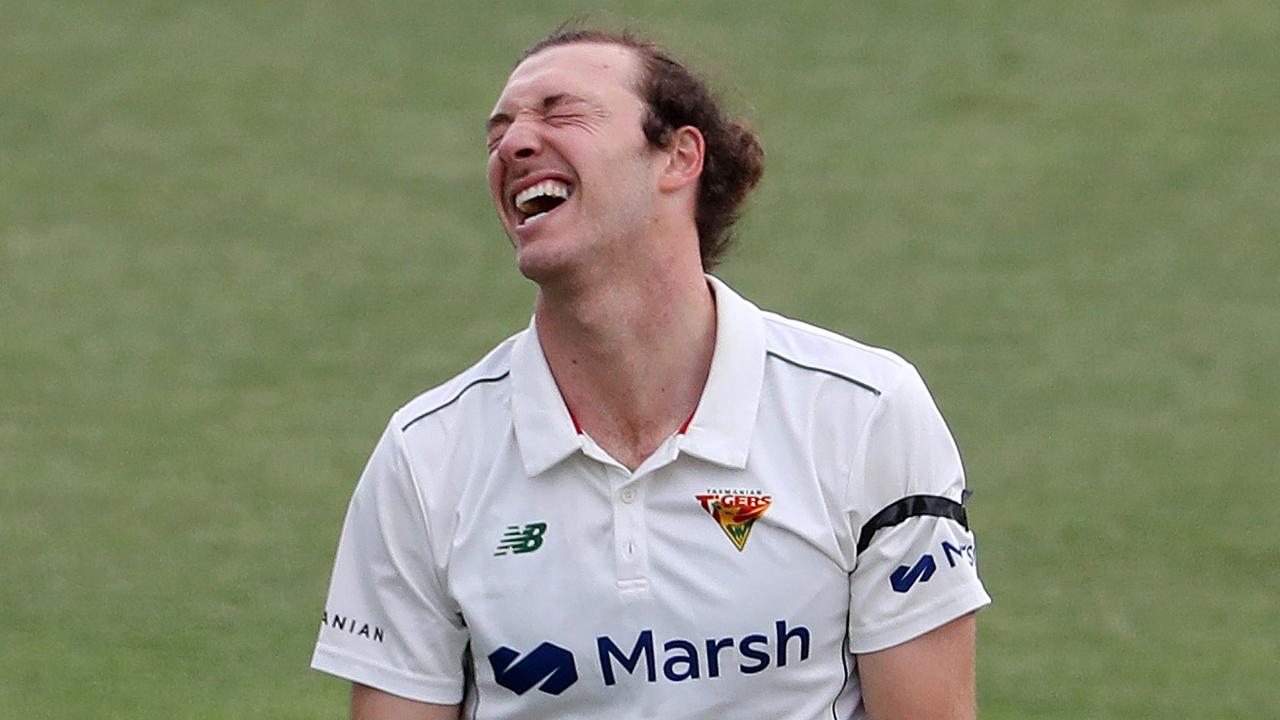 Miserable weather on the Apple Isle is continuing to interrupt the Sheffield Shield clash between Tasmania and South Australia.

Tasmania may be left to rue its defensive tactics at the crease as rain continues to halt play at Bellerive Oval.

Bad weather on the Apple Isle put a dampener on days one and three of the Sheffield Shield clash with South Australia and in between the rain delays, the home side was anything but eager to make up for lost time.

On day three, the South Australian attack managed to foil Tasmania’s slow-and-steady tactics, forcing the collapsing Tigers to pick up the tempo when play resumed on the final day.

Tasmania finally decided to put its skates on as Jordan Silk slugged his way to a half-century, but it’ll be too little too late — by the time rain stopped play yet again after lunch on day four, the only result possible was a draw.

The South Australians are now back in to bat and have 32 runs on the board for no loss but their efforts to secure a win will be in vain.

As they watch the rain come down from outside the boundary rope, the Tigers may be left wondering what could’ve been had they checked the weather forecast on day three and worked more enthusiastically towards a bigger total.

Torrential rain on the Apple Isle has ruined day three of Tasmania’s clash with South Australia just when the home side appeared to be in hot water.

The South Australian attack punished Tasmania for its slow-and-steady tactics on day three, with Ashes hopeful Travis Head picking up one of two quick wickets in the dying minutes before lunch to set off a worrying collapse.

The Taswegians managed only 79 runs in 2½ hours of cricket and their defensive game plan began to unravel spectacularly as the South Australians burned through two of the side’s remaining three specialist batters in the space of four balls.

It was a lineball lbw call that sent former Aussie international Ben McDermott (45) packing agonisingly short of his third half-century of the summer.

With the new ball imminent, the Tigers could ill afford to lose another wicket before lunch, but Head, who disappointed with the bat in the first innings, piled on the pain.

Things only got worse when play resumed — skipper Beau Webster (1) faced just three deliveries with the new ball before edging straight to wicketkeeper Alex Carey, who took the most basic of catches.

The Tigers finally began purring, with Jordan Silk and former Test star Peter Siddle picking the pace up to ensure the Redbacks’ target would be chased down with two wickets in hand.

Scores were level when the match was delayed, and eventually abandoned, due to the weather.

The first day of the match was also washed out, and with more rain predicted for the fourth, it looks as though the Tasmanian weather could pour cold water on the sides’ hopes of securing a result.

“It’s going to be a tall ask tomorrow but we come prepared to hopefully get ourselves into a position for whatever tomorrow looks like,” Head said at stumps.

“(We’ll aim to get) two wickets as quickly as possible, get batting and see where the game takes us.”

HENRY IN THE HUNT

A second straight century from South Australian opener Henry Hunt thrust his name up in lights after his captain Travis Head trudged off Bellerive Oval when his bails were sent flying knowing the opportunity missed as the race for an Ashes spot tightens up.

Like Usman Khawaja did in Queensland to reinforce his Ashes credentials, Hunt defied bowler friendly conditions, and wickets falling around him, to make 134 against Tasmania in Hobart.

For 24-year-old Hunt it was a fifth first class century in his 20th Sheffield Shield appearance for the Redbacks and his third in five games, going back to the last clash of last season.

Hunt, who has 242 runs in his past two Shield innings, could yet get the call to travel to Brisbane, a trip Head is certain to make despite being dismissed for just 14, later this month for the “possibles v probables” clash between Australian players before the opening Ashes Test at the Gabba.

Head’s quest to fill the number five spot in the Test batting line-up, which national selection chairman George Bailey said was “certainly open”, took a setback when he was bowled for just 14, although it may not be a death knell with Khawaja looming large.

An early season 163 against Queensland and a mammoth 230 in a one-day game helps his cause, but the left-hander’s 14 on a bowler-friendly wicket in Hobart came after four other Sheffield Shield innings that yielded only 108 runs.

Instead it was teammate Hunt who stood tall making 134 as former Test quick Peter Siddle showed there was much life in the old dog yet.

The match was evenly poised at stumps after a wicket to start what was the final over of the day, when Tasmanian opener Tim Ward was out for a stubborn 29 off 102 balls, left the home team at 3-102, 118 runs behind with two days to play.

Hunt scored 134 of SA’s 220 after Siddle (4-42) pounced in the bowler-friendly conditions with four wickets after another short rain delay in the opening session.

Rested from last week’s trip to Queensland, despite taking five second-innings wickets to guide Tasmania to a big win over WA last month, Siddle took his Shield haul to 11 wickets.

The recently turned 36-year-old, in his second season for Tasmania after not being offered a contract at Victoria for the 2021-21 season, now sits in the top 10 wicket-takers for the season.

DAY ONE WASHED OUT

Travis Head will have to wait until day two to offer his answer to the Ashes challenge set down by Usman Khawaja after rain ruined the opening day of South Australia’s Sheffield Shield clash with Tasmania in Hobart.

Only 15 overs were bowled as conditions closed in on the Bellerive Oval, enough for the home team to claim two wickets with veteran quick Peter Siddle continuing his career renaissance in Tasmania, removing in-form Redback Jake Carder.

Both teams held a minute’s silence before the game to honour the memory of long-serving SACA chief executive Keith Bradshaw, who died this week, before the rain set in early.

Head, one of a short list of contenders to bat in Australia’s middle order in the opening Ashes Test in Brisbane, survived 12 balls when play resumed for a short period, to be not out when stumps was called, his team 2-27, with a chance to score big on Friday.

On the same day national selection chairman George Bailey said the number five position in the Test line-up was “certainly open”, Head could only watch on as a potential rival, Usman Khawaja, made the sort of 70 on a green-top at the Gabba which was worth at least 100.

Head, with a huge Shield century and a one-day double-hundred of his own already this summer, made just nine and 28 in his last two Shield innings and needs another big one to reaffirm his place in the Test conversation.

On the back of his sterling form at the T20 World Cup, Mitch Marsh’s name has been thrown around as a potential Test selection, to give a one-two batting and bowling punch with rookie Cameron Green batting at five, and Marsh at six.

With an average of 39.75 from his 19 Tests, with two centuries, Head sits well above Marsh, who averages just 25 from his 32 appearances in a baggy green, on numbers alone.

Marsh also has not played a red-ball game since making scores of 24 and 22 in a Sheffield Shield loss to Tassie in April.

Half a million dead in US, confirming virus’s tragic reach